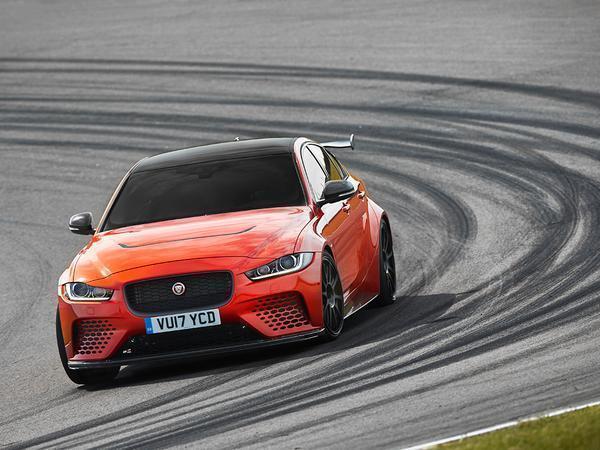 Yes, it really is that much money. No, there isn't a Nurburgring lap time yet. And no, it isn't rear-wheel drive, though we are promised the most rear-biased all-wheel drive Jaguar ever. Thought we'd clear up those points early doors. 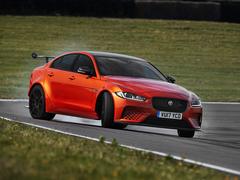 Fear not; it does skids

Because, quite frankly, there's a hell of a lot to be excited about with this

. We've had a look around some pre-production cars, spoken to the people who've built it and generally got in rather a tizz about a Jaguar saloon with genuine downforce, with circuit focus unprecedented for the brand and with 600 bloomin horsepower.

Let's backtrack a bit first though, to the Project 7. That was the D-Type-inspired, F-Type-based SVO limited edition from 2013, its first such creation. That's considered a success, with all selling out very quickly and used values still way above original RRP. Beyond the obvious bodystyle differences though, the 8 is a very, very different prospect (and project) to the 7.

That car was predominantly a styling exercise, a nice homage to an icon with a slight performance gain; this car is described as the most track focused Jaguar ever - yes, more so than the XKR-S GT - and led predominantly by the engineers. So while some wanted rid of the big wing, that was forbidden because it would mess with the aero. It's why the headlights are 14mm further forward than a standard XE, necessitated by the larger wheel and tyre assembly. And it's why new rear doors were created for this car; not for style, but because the arch extensions for the wider rear track meant the standard ones simply wouldn't fit. "Form follows function" is a line repeated frequently at the presentation evening, and that's exactly how we like our fast cars, isn't it? 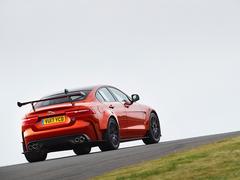 Actual downforce! On an XE!

Everywhere you look there are incredible details that subtly (or otherwise) hint at the performance potential. That rear wing is adjustable on its aluminium uprights, the aero cut outs around the rear wheels are savage and the exhaust/diffuser arrangement looks like it might take the tarmac with it. It would be a stretch to call the XE pretty, but by heck does it look fast.

How fast? 0-62mph in 3.7 seconds and 200mph fast, apparently, thanks to the most powerful version yet of the 5.0-litre supercharged V8. The eight-speed auto and all-wheel drive are standard. Interestingly SVO says that lap times are "a priority" for this car, with the engineering obstacle therefore being the balance between the downforce required for high-speed cornering and the lack of drag needed for 200mph. Without a wind tunnel at Jaguar, the vast majority of this work has been done in CFD - it produces 122kg of downforce at 186mph. 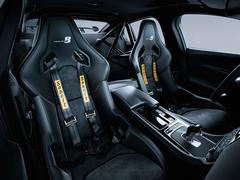 Seriously, this is what a Track Pack will look like

What else contributes to the track kudos? Cup 2s are standard fit, 265-section at the front and 305-section at the rear, with 20-inch forged wheels. Ceramic brakes are hidden behind them, 400mm discs at the front and 396mm behind and said to use motorsport-spec fluid. The suspension is manually adjustable too; while the dampers are still continuously variable items, the uprated springs sit on adjustable platforms that can lower the car by 15mm for track. Also new underneath are stiffer bushes, machined-from-billet knuckles that reduce unsprung mass, ball joints instead of bushes for the rear upper control arm assembly and revised EPAS. The Jaguar e-diff works with the Intelligent Driveline Dynamics all-wheel drive, and has a standard cooler; presumably that's in response to a few hot differentials in XFRs. And you thought it was just an XE with a big wing... 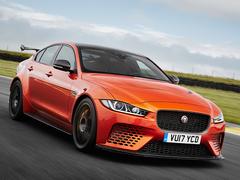 Coming to a track near you (hopefully)

Despite these changes, the XE SV Project 8 still weighs 1,745kg with fluids but without a driver; for reference an

is 1,510kg by the same measure, though is down 100hp and lacks the all-wheel drive. A Track Pack removes the rear seats, replaces the fronts with a pair of carbon-shelled items (with harnesses) and puts a 'Harness Retention Hoop' where the seats were. It saves 12kg.

There isn't a price yet for the Track Pack but, as you may have seen, there is a price for the car: £149,995. More than a Project 7 was, more than the M4 GTS was and more than, well, quite a lot of cars. Jaguar says the price reflects the "high-value engineering content and hand-built assembly process" of the car. Just 300 will be made, all in left-hand drive, and all to be assembled at the new SVO Technical Centre. Three standard colours are offered, with another five optional, but the sky's the limit as far as customisation is concerned: if you want it, SVO will make it happen. Wonder if they could do a green TWR livery on it? If you want one, best move fast...