There's no loser in this contest; is there a winner though?

The Sports Series range is crucial for McLaren and as close to bread and butter volume product as the brand will ever produce, given the oft-repeated PR line that it doesn't see the need to diversify into saloons, SUVs or anything other than carbon fibre sports cars. Bravo. 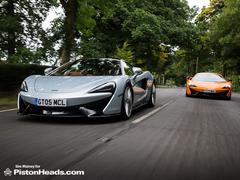 There's no shortage of ambition either, the 12C launching against perhaps the best V8 Berlinetta Ferrari has ever built. Meanwhile the 570S goes up against a recently refreshed

, while Audi finds itself in the unusual position of offering the more emotive alternative with the

Formidable products all three, backed up by resources and economies of scale that offer significant technological advantages. Against that can McLaren's single-minded minimalism really stand a chance? Previous experience suggests yes.

Having driven the 570S and 570GT in isolation, an opportunity to drive both back to back was too tempting to pass up. The challenge? To see if there really is enough breadth in the Sports Series package to offer a credible alternative against all the Germans offer at this price point.

There will be predictable moaning about the constant comparisons to Porsche products but the 911's dominance is impossible to ignore; a 911 Turbo S ticks boxes from all-weather ability to occasional four-seater transport, underlaid by performance and accessibility still dominant in its range plus a well-practiced blend of presence and discretion. Not much of the latter in this particular 570S, it has to be said. 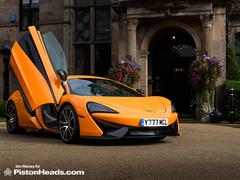 Supercar drama? Got it

Indeed, along the 911 spectrum the spec of this particular car is rather more GT3 than Turbo. Well it is until you consider the bottom line has gone from £143,250 to something closer to £190,000 and the last

we tested was £115K with options, Porsche GB's

£143K by the same measure. Supply and demand issues rather

for 991 GT3 variants though, 'regular' GT3s now commanding £130K or so while RS versions are well into the mid-200s. Could a Porsche GT customer disillusioned with that world find solace in the minimalist interior of a 570S?

Because, more so than even the performance, the first thing that leaps out at you in this car is the quality and depth of the feedback. McLaren doesn't rely on four-wheel steering, active engine mounts or other gimmickry for this either. Indeed, the 570S doesn't even have a limited-slip differential. It comes from the stiffness and lightness of that carbon tub. And the kind of decisive weight and response to major controls even Porsche seems to have forgotten. 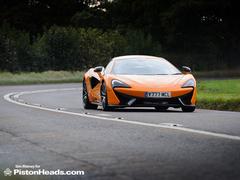 Classically involving in a way many now aren't

That there are no adornments to the wheel beyond the rocker-style one-piece shifter paddle speaks volumes, likewise a seating position that brings it right into your chest and pedals so perfectly aligned for left-foot braking it feels a stretch to do anything else. The way the wheel wriggles and writhes in your hands at any speed will come as something of a shock for many in this day and age too, likewise that the brake pedal feels solid and demands legwork to deliver meaningful retardation rather than grab with over-servoed bite on first touch. The damping is brilliant too, even the most extreme Track mode usable on a bumpy British B-road while Normal offers Lotus-like float over similar surfaces, meaning you can dial in your level of interaction according to pace and preference. Without the active aero or roll control of the 650S the 570 is perhaps a tad less composed but, on the flipside, more consistent and readable.

The appliance-like blare of the twin-turbo V8 remains a McLaren weak spot in the neck-hair prickling stakes. But the forced induction lunge when the turbos spool pretty much makes up for it, likewise that the more characterful bangs, pops and excitement only come as a reward for driving it properly. Rather than just selecting Sport mode as you might in the R8.

The minimalism of the interior works in this context too, letting you focus on the job at hand. But it's not shy. And a bright orange McLaren gets a LOT of attention. Nearly all of it positive. But what if you want to make similar progress with a bit less fuss?

Does the addition of a glass rear hatch, slightly softer suspension and a subtle shift in intent signalled by the GT suffix really let the Sports Series play the 911 game all the way from GT3 to Turbo? And, for all the difference those changes suggest, is there really much of a leap between 570S and GT? 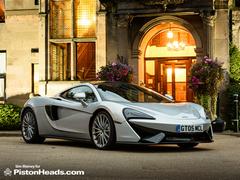 Or for a more discreet McLaren...

You can judge that in the response to the cars. In bright orange and carbon the 570S inspires traditional supercar glee in onlookers (and occupants). Novelty doors just complete the package - you kind of get used to the grins and camera phones each time the driver's door lifts on its gas strut.

The GT is similarly exotic - much more so than an equivalent 911 Turbo or R8 - but the response seems much more considered. A narrowing of the eyes and a considered "Mmm, that's NICE!" rather than goofy grins and raised thumbs. And, let's face it, if you're going to live with the car day in, day out (more on this shortly...) the reaction from other people is something to consider.

Looks are a personal preference and there's so much scope in the individualisation options of both cars to make a straight comparison difficult - you could spec a GT in Mantis Green with carbon bits or 'detune' an S with standard paint and silver wheels. It's clear the GT trades outright aggression for a tad more elegance though, the rear quarter in particular rather more restrained and understated.

Do they drive any differently though? The steering is geared a little slower in the GT - 15.7:1 10 degrees either side of dead centre against 15.1 in the S - and you feel that immediately out on the road, this informing a slightly more languid driving style. All things relative though; there's still weight, feedback and positivity to the wheel that stands out in this day and age and a sense of feistiness and agility born of a kerbweight at least 100kg less than a 911 Turbo. It's only 55kg heavier like for like than the S too. And while their respective settings on the three-stage Powertrain and Handling dials feel to converge in Track mode, the GT and S are certainly further apart in Sport and Normal. The quieter standard exhaust and additional sound deadening of the GT add some filtration, while its P Zero tyres mean more measured feedback than the constant chatter through the S's stiffer sidewalled, more camber sensitive P Zero Corsas. Standard steel brakes on the GT add unsprung weight of course but there seems little compromise in power, at least for road use. 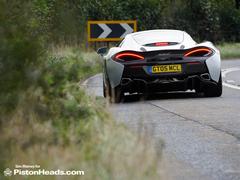 Fears it has been dialled back or dumbed down for wafting need to be put into perspective too - this is still a 200mph-plus car, its 9.8-second 0-124mph three tenths slower than the S but a symbolic tenth faster than a 991 Turbo S with all its four-wheel drive and Sport Chrono enhanced wizardry.

Comparisons with that car - and the R8 - extend to more than just bombastic performance though; here the pared-back style of the McLaren's interior, and some literal rough edges to fit and finish, face tougher scrutiny than in 570S against GT3. The Germans clearly think a significant number of buyers in this sector place value in button and gizmo count and here the McLaren focus on feedback and driver-focused purity may struggle. The GT Upgrade Pack that bundles nose lift, Bowers & Wilkins audio, rear view camera and a few other bits and bobs will help address a few convenience and luxury concerns. But there's also no escaping that it feels more 'special' than an R8 or 911. Normally that'd be seen as a bonus. But however subtle the paint choice basic kerbside rituals like parking or loading the shopping create more theatre than an equivalent Porsche or Audi, which is not always what you want.

Motivation to drive the S and GT back to back was more than just idle curiosity, because we'll be making this choice for real when we spec our 570 long-term test car. Yes, that is as outrageous a proposition as it sounds but we'll selflessly go through this agony of choice and report back on the findings. 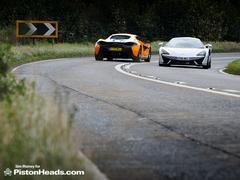 More to follow once a decision has been made!

For those living this dream for real there are some R8 and 911 customers for whom the McLaren's exotic looks and driver-focused character will be a little too much, likewise the apparent lack of bells and whistles in interior or mechanical spec. There's no ignoring how quickly the prices of both variants can quickly spiral from junior to proper supercar league too, a generous extras spend on a 911 Turbo S or R8 V10 Plus barely covering a few ticks on the McLaren options sheet.

But if you care as much about the experience as you do about the image the Sports Series in both configurations is a breath of fresh air. From a driving perspective 570S to GT can indeed rival the spectrum Porsche covers from GT3 to Turbo S, McLaren also delivering on the proper supercar thrills Audi offers with the R8 minus a load of weight and gimmickry. No mean achievement.

And a few late nights on the configurator at PH towers as we ponder the final spec for our long-termer. There are worse dilemmas...