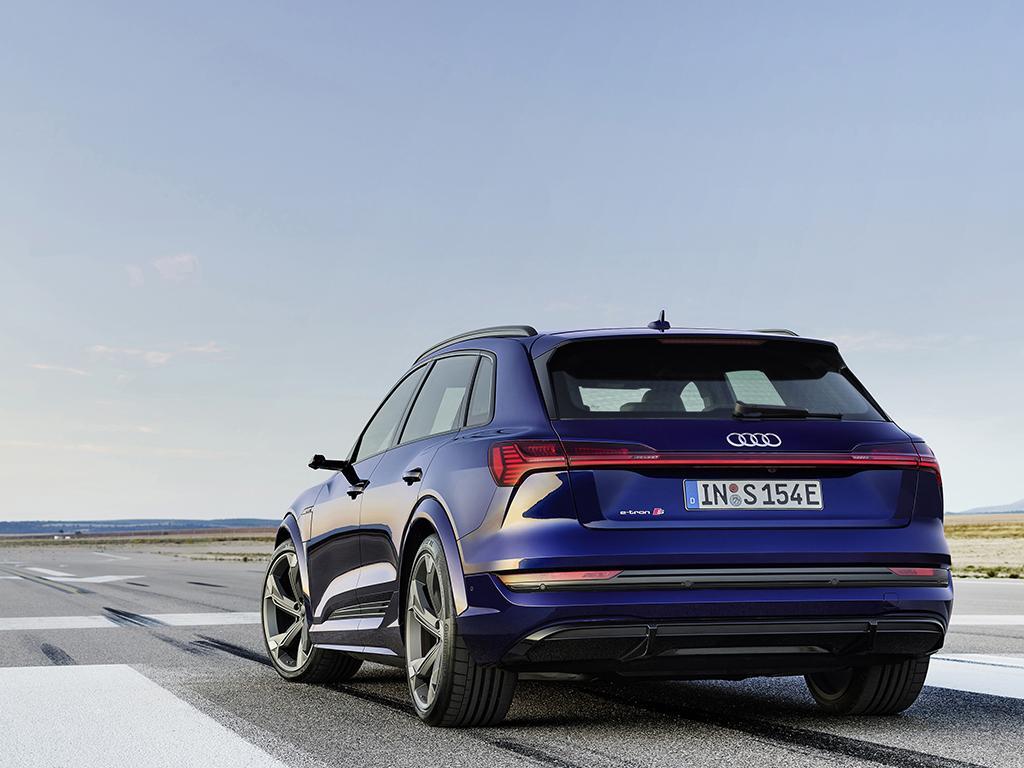 Not so long ago, the fast Audi formula was pretty simple, because it was an A4 or A6 Avant with as much V8 as could be crammed betwixt headlight and bulkhead. With popularity came expansion of the range, incorporating coupes, SUVs, and even diesels with the SQ5 of 2013. Now there's another avenue being pursued by the Audi S empire: EVs.

This e-tron S and e-tron S Sportback pair are Audi's first foray into electrified performance motoring, and expect many more to follow in their wake. Described as a "significant milestone" for the e-tron brand, the S models are notable for not being just slightly hotted up versions of a standard 55-badged car. They are in fact the first "volume production" battery electric vehicles to use three electric motors (two at the rear, one upfront), which it won't surprise you to learn brings some appropriately swift acceleration numbers.

With a total of 503hp from the trio of motors, plus 718lb of peak torque available in eight-second overboosts, the e-tron S can reach 62mph in 4.5 seconds and a top speed of 130mph. Which is more than fast enough for an 'S'-badged car - what might an RS do? The range is rated at 223 miles for the standard car on WLTP and 226 for the Sportback, with the 95kWh battery having a usable 86kWh.

The setup of those motors is interesting beyond the bare stats, too. Typically the e-tron uses only the rear pair, with the front one (basically an e tron 55 rear motor adapted for this installation) called upon only if extra traction or power is needed. The rear motors can apportion their force to each wheel as required in milliseconds, and it's said that "on challenging roads" is where the e tron delivers its best.

To that end, the air suspension has had an 'S' rework and the powertrain has a more pronounced rearward bias than a standard car; it's said that with drive select to 'dynamic' and the ESC backed off slightly, the e tron S gains an "an even more adjustable" cornering attitude and the ability to perform controlled drifts. Just make sure there's plenty of space for that; even on a runway these look like big cars...

They're even larger than standard e-trons actually, with 5cm added to the width of both S models - note the wider wheel arches compared to a regular model. They also receive the trademark silver mirrors and standard 21-inch wheels - 22s are optional.

The e-tron S and e-tron S Sportback will be available to order "from summer 2020" (which we assume must be about now) and all customers ordering before 2021 will receive a complimentary wall box charger. A useful saving, though at £87,000 and £88,700 for the Sportback, the e tron S isn't exactly aimed at those switching to electric motoring to save the pennies. At present, the cars face no obvious rivals given the lack of performance derivatives for both the Mercedes EQ C and Jaguar i-Pace. In fact, the strongest competition it might face is from within, and alternative S-badged Audis; the 435hp SQ8 TDI costs from £81,740...