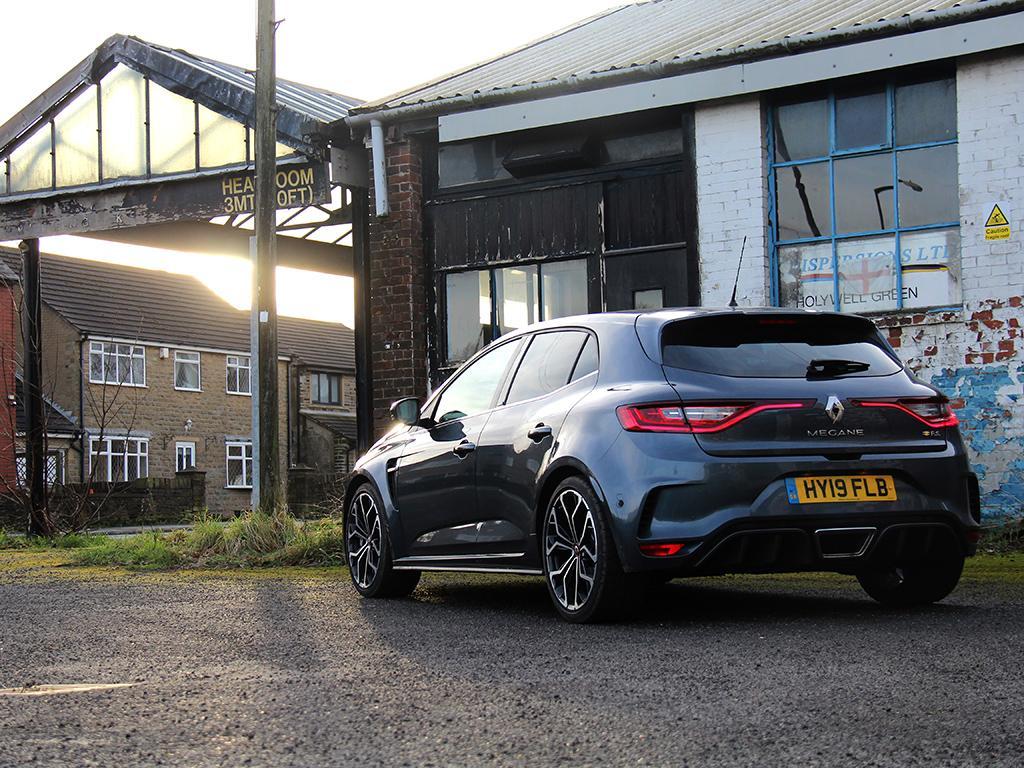 Interesting the different observations people make when driving the same car, isn't it. Both Matt and Ben have said in previous reports on the Trophy that they weren't fans of the manual gearbox and wondered if it would be better with the dual-clutch EDC option, while I rather like the chunky shift action, the pedal placement and sense of interaction. The burly ride has been commented on by both but never raised as a deal breaker; I like to think I've got a higher than average tolerance of such things but after one long drive in it I was broken. Or maybe I'm just getting old.

Whatever differing views we may have you'll have picked up huge goodwill on the team toward fast Renaults, set against the niggling sense this one hasn't unequivocally inspired us in the way we'd have hoped. There are two potential answers. One, go all-in with 70-grand's worth of carbon wheels, NACA ducts and 'ring record bragging rights in a Trophy-R. Or, two, see if there's a more rounded Megane available in a sensible pants spec of standard chassis, understated grey paint and that as-yet untested dual-clutch gearbox option.

]Compared with the PH Fleet Trophy, the car you see here loses 20hp, the stiffer Cup chassis settings, the Torsen diff between the front wheels and some of the fancier trimmings like the Recaro seats. It does, however, keep the rear-axle steering, hydraulic bump stops and rest of the package. Everything from the broad-shouldered stance to the businesslike vibe you get from behind the wheel are all set off nicely with the more subtle look too. Usual caveats apply about the relevance of OTR pricing but, at £32,485 as tested, it's hardly what you'd call the bargain option against the £36,085 with options of the PH Trophy.

Matt enjoyed the standard chassis when he drove the 280 against a base-spec i30 N and I've got to say I totally agree with his assessment. On the right road the Cup set-up is inspirational and perfectly judged for a maximum attack driving style, just as hot Renaults always have been. On a two-hour drive across Wales I absolutely adored it. After two further hours grimacing along bumpy motorways and dual carriageways I'd have happily swapped into an Uber, though.

Even optioned onto 19-inch wheels (£950 I'd wager you don't need to spend) the standard chassis immediately feels more tolerable for everyday use. It's no Rolls-Royce but the set-up just feels calmer, without falling apart dynamically or losing its edge. Far from it, in fact. Turns out a slightly softer Megane R.S. is actually a more lively one, at least it is on greasy winter roads. Maybe the Bridgestones aren't all that in these conditions. Or it was just cold enough that any performance tyre was going to struggle. I've got a theory it might be that the softer suspension permits more weight transfer around the four corners of the car, but that may well be nonsense. Whatever the reason, this 'base' R.S. felt way livelier and more willing to throw shapes than any other I've driven thus far.

It's still got fantastic balance and a strong front end against which to judge the available grip. But the way it rotates on a lifted throttle makes it more alive than anything I've driven for a long while. That it feels so natural and playful even with the tricksy rear-wheel steering is even more impressive.

And what of the gearbox? It's perhaps not quite as slick as a Golf's DSG but it's fast enough and the ability to play with that balance through left-foot braking opens opportunities you wouldn't have in the manual version unless you're very fancy with your footwork. Most of all it suits this particular car and its (relatively) undercover vibe, though chunkier shifter paddles would be nice and the habit of delivering multiple downshifts when only one was summoned can be annoying. Fair to say it's something you'll encounter on most similar dual-clutch 'boxes, too.

Personally I'd still stick with the manual but the EDC is a worthy choice if you want a two-pedal Megane and is well up to the job. As an overall package though this car was a real surprise, and proof that sometimes subtle flavours can be just as satisfying as the stronger ones.

Previous reports:
Another Trophy triumph?
Brilliant, baffling, bemusing - what next?
The beauty is more than skin deep. Mostly.
Nearly tremendous on track
Good enough to win over a serial Renault Sport fan?

Search for a Megane R.S. in the classifieds here