RM Sotheby's hosted a fantastic auction in Battersea Park last night, celebrating its 10th year at the venue and stoked by post-Brexit exchange rates. The first car to catch the eye of bidders was the

; the stubby silhouette got fierce bidding pushing the price past the upper estimate of £320,000 and closing at £403,200. An interesting barn find

with all original engine and running gear dropping rust over the manicured carpets smashed its initial estimate price of £50,000 with the gavel dropping at £128,800 whilst the stunning, never-raced 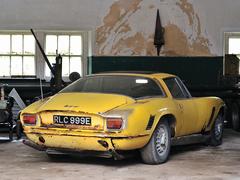 The Porsche estate comprising of a number of stunning and rare examples inspired multiple bidding wars. The

, not to be outdone in its fantastic Riviera blue, closed at an astonishing £1.8m. A collection of AMGs didn't do as well as the Porsches, however, simply making their estimates. No mean result but somewhat overshadowed by the frenzy over the 911-shaped glitterati.

Ultimately the show-stopping moment fell to a British car - an Aston Martin DB4 GT that reached £2,408,000 by the time the gavel finally dropped, rounds of applause erupting as it was rolled off the stage. Meanwhile Jason Plato's BTCC Laguna and the A4 Quattro touring cars faltered and unfortunately didn't end up selling while the Austin Princess owned by John Lennon had all of its proceeds given to charity.