So what's fastest? Estate or hatchback? The answer, as any Volvo driver, knows is of course estate. And SEAT has proved it by getting its tame Spanish racing driver, Jordi Gene (Marc's older brother) to drive the

round the Nurburgring three tenths of a second faster than he achieved in the hatchback version last year to record a 7min 58.12sec.

SEAT insists the ST used to achieve this was unchanged from the production car, here fitted with the manual gearbox and mythical Performance Pack featuring bigger brakes, Pilot Sport Cup 2 tyres and - in its most extreme form - no air-con. Or air vents. Even if they did have a few tricks up their sleeve, to crack a time that a dozen or so years ago wouldn't have shamed a 911 Turbo is pretty impressive. 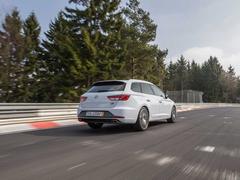 'Darling, could you just pop to Adenau for some milk?'

It's also getting fairly ridiculous as manufacturer after manufacturer piles round the Nordschleife to be the first to claim certain production car records. SEAT did briefly hold the record for fastest front-drive production car last year until Renault pinched it straight back off them shortly afterward in the

Then of course Honda this year came along and said, ner-ner, we'd beaten you all along with our Civic Type R with a time of 7min 50sec achieved last year. Albeit in a production car not yet in production ... and quite obviously caged and with significant interior parts (passenger seat included) removed.

Obviously in the world of virtual Nurburgring trophies SEAT now has the fastest production ESTATE record. Presumably VW could pinch that quite easily with its more powerful four-wheel drive Golf R estate, which would mean SEAT could insert the words 'front-driven'. If Honda nicks that with a Type R Tourer record (this is supposition - no such car has been announced) then SEAT would have to come back with a fastest estate with a roofbox, or some such nonsense.

The manual Cupra ST does weigh 45kg more than the hatchback at 1,440kg, and is two tenths slower to 62mph at 6.1 seconds. But it's apparently faster on the long straights thanks to extra slipperiness of the body shape. What we don't know is whether it was achieved with the rear seats up or down. That's an extra two seconds right there.