Snow versus 762hp Tesla works far better than it should

I've always fancied forming a cult. But, much as I'd surely enjoy being worshipped by loyal disciples who pander to all my messianic tendencies, the inevitable conviction for tax evasion, followed shortly after by a Waco-style siege, would probably take the edge off the experience.

The next best thing, of course, would be to live a life like Elon Musk - the brilliant billionaire visionary who not only has access to his very own spaceships, but owns the world's most subversive car company. And boy, does that man wield his power. 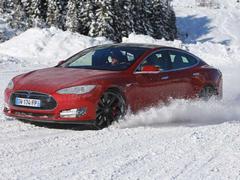 The next Tesla adventure!

"Whatever Elon wants, Elon gets" is the popular impression of Tesla's corporate culture and, since we last drove one of the

, it's been busy expanding the range to include the Model X and all-wheel drive versions of the Model S, including the 70D and this 90D.

That's right; not satisfied with the P85D version, Musk asked engineers to crank up the 85kWh lithium ion cells to a cool 90kWh. This sees power rise from an already absurd 691hp to a barely believable, have-a-lie-down, 762hp. Torque too swells to a round 1000Nm, or 737lb ft. For the official line on how Tesla comes up with those figures see here.

Now it gets ludicrous
Forget Insane Mode, now (for a price) you get Ludicrous Mode - the ability to launch your 2.2-tonne Tesla to 60mph in 2.8 seconds and 100mph in less than 7.0 seconds. This means nothing short of a 918 Spyder or McLaren P1 now has a chance of beating the five-seat family car away from the lights.

Ludicrous Mode, by the way, isn't a mere throttle map but a cunning way of convincing the lithium ion cells to boost their flow rate from 1300amps to 1500amps for maximum thrust - there's also a bigger fuse to prevent meltdown after repeated full bore starts. 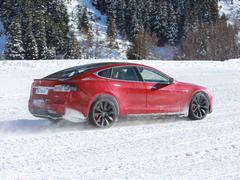 Sadly, there will be none of that today in Austria. Instead we're at BMW's proving ground, a snowball's throw away from the Pitztal Glacier ski resort, to prove how well (or not) the P90D's all-wheel drive works in extremes. No heater testing or range experiments here!

Early on a mechanical version was suggested before the added weight and complexity ruled that out. The simpler solution eventually was adding a small motor on the front axle, bizarrely boosting efficiency (and range) over the two-wheel version.

More, more, more
That's because the front motor allows the rear one to be shrunken - not that you can tell the lighter rear motor is smaller, as it produces a mighty 503hp. The big efficiency gain is that the rear motor can 'torque sleep' and allow, at motorway speeds, for the 229hp front motor to drive the Tesla.

Forget active yaw control; calibration of the electronic stability control, plus a front and rear mechanical differential, as well as torque vectoring across the axles, compensates for the lack of mechanical connection between the front and rear diff. 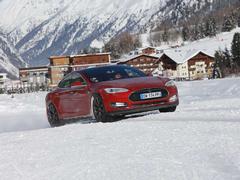 Torque vectoring does the job of centre diff

Select 'Drive' and the Model S experience is even weirder today because instead of silence there's the sound of soft virginal snow crunching loudly beneath its tyres. Pessimistic Tesla has set out a coned course to judge the mixture of driving ability of the elite band of hacks assembled from all over Europe. Killjoys, I think, until the car in front nails three of them at walking pace.

Cheekily, while others dutifully learn the course as they're barked instructions in German, I floor the throttle and look for somewhere soft to crash into if all goes wrong. Nothing. The Model S merely ups the pace and the familiar orange glow of the ESP scowls at me.

I spend the rest of the lap trying to a) switch the huge infotainment system to English and b) fully deactivate the life-saving stability system. Why? Because it's time to oversteer! I fail at both and visit the pits for help...

What Elon wants...
"Elon wanted to build the world's safest car, and that's what he created", says the German Tesla engineer. Fine, but I'm on ice - there's nothing to hit, I'm not some diet-pill-junkie-soccer-mom headed for a tree - I try to tell him.

It obviously loses a lot in translation, he replies: "But this is a car to carry your wife and kids in. It has over 700 horsepower, it would be insane to let that loose, without restraint, on the road with people who weren't trained". 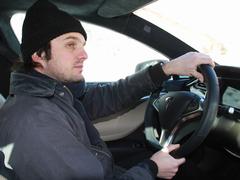 John gives up on mischief and decides to drive

It's hard to argue with Elon (it's creepy how Tesla employees refer to their CEO by his first name only) on that point. Although surely if you're a real enthusiast, who's paid good money for your P90D, you should be allowed to explore the true limits of your car without a safety net.

Just as I give up, one of the snow driving instructors, who earlier was drifting a Land Rover 130 with 'Land Rover Experience' emblazoned down its side, shows me how to deactivate the first layer of traction control. I'm glad, because on the next lap the Model S comes alive. But with the ESP still in control, the way to get the best out of the P90D is to show some restraint.

Despite having 737lb ft from the moment you stab the throttle, it's unwise to wake the electronic gods. Instead you use precise steering inputs, lift, and wait for the nose to have gripped before you dare apply enough throttle for a baby drift. Get carried away and the tail arcs too wide, the ESP kicks in and power is completely cut to such an extent you sometimes find yourself at standstill. It's incredible through just how agile and nimble the heavy Tesla feels here, with great traction too.

It's at lunch I catch up with my German Tesla engineer friend and ask him, again, why the Model S isn't as playful as it should be. Or rather, we want it to be.

...Elon gets
"For sure, if Elon wanted it to be that way, it would be. When the Model S went on sale it didn't creep in traffic, so customers asked him for a creep function. Elon listened and, 24 hours later, the Model S was given a creep 'function via a software update."

So on that basis, if Model S customers started asking for a Ford Focus RS-style 'Drift Mode', would he listen? 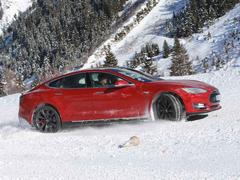 One stage of ESP disabled makes it more fun!

"Absolutely, Elon would listen and, if he agrees, it will get it. Elon gets what he wants." So there we have it; all Model S owners out there, start the 'Tesla Campaign for Real Oversteer' right now.

After all the slip sliding it's time for a drive in the Model S P90D on the local mountain roads. If anything, it's on the frozen tarmac that the all-wheel drive traction benefits are even more obvious, especially since there's the full 762hp to play with.

You never, ever get used to the acceleration. Apparently, from standstill, the P90D has recorded 1.1g up to 14mph which is insane. Sorry, ludicrous...

Act your age
What's a shame is that nimbleness and playful size demonstrated earlier in the day is replaced by intimidation back in the real world. Drive a car fast that's heavier than a Range Rover and the laws of physics will kick in sooner or later. Luckily I only encounter understeer of the mild kind, those winter Pirellis dishing up astonishing grip even in conditions several degrees below freezing. 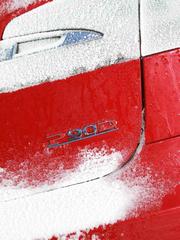 And it's just the badge that gives it away...

And now the billion dollar question: would you have one over an M5 or E63?

Something I never thought I'd say is the sheer acceleration and overtaking opportunities 762hp provides easily compensates for the lack of a thumping V8, but what's missing is that final layer of engagement and entertainment the German super saloons offer.

BMW M and Mercedes-AMG can sleep safe for now, but it's only a matter of time before Elon, a former McLaren F1 owner remember, gets bored with safety and creates a car as good to drive as it is fast. Hopefully with a drift mode too.