'Beyond 400hp' Mercedes-AMG A45 caught testing

Even with the A35 almost upon us, Mercedes-AMG is wasting no time perfecting its follow-up to big brother 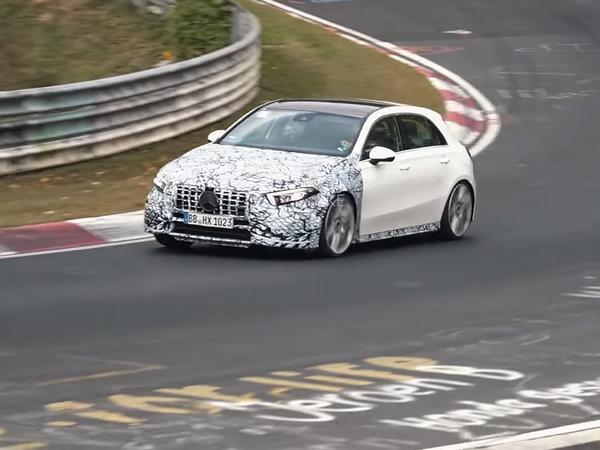 Hot on the heels of Mercedes-AMG's recently unveiled A35 is the full fat A45 version, which was filmed at the Nurburgring last week during high speed testing. Following the introduction of AMG's new entry-level hot hatch, the second generation A45 is due with a higher-specification version of the same boosted 2.0-litre offering more than 400hp.

That, you'll note, would give it at least 200hp per litre and, unless something more ballistic bursts out in the coming weeks, should ensure the A45's motor offers the highest specific output for a production engine in the world. Not even the McLaren Senna and its 800hp 4.0-litre can top it.

Where the 306hp A35 rivals the BMW M140i, Audi S3 and Volkswagen Golf R, the A45 will be up against cars like the RS3, BMW M2 Competition and, when it arrives in 2020, the next-generation Ford Focus RS. As such, its twin-scroll turbocharged four-cylinder engine, although based on the same hand-built M133 base, will be extensively reengineered with unique internals, a new aluminium crankcase and different cylinder head.

With more than 400hp to drive all four wheels via an expected new nine-speed automatic (the A35 gets a seven-speed transmission), we can expect the old A45's 4.2 second 0-62mph time to be eclipsed. Are we looking at a sub 4.0 sec super hatch? Don't bet against it. And don't expect this hatchback to only offer point and squirt performance, because its savage straight-line performance will be joined by enhanced dynamic adjustability thanks to the magic of torque vectoring.

Add in structure-stiffening components like an aluminium shear panel beneath the engine and two additional diagonal braces up front, as well as AMG MacPherson strut suspension, aluminium wishbones and four-link rear axle suspension, and you have yourself a high performance setup to rival premium sports cars. Adaptive dampers, an option on the A35, ought to feature as standard.

Elsewhere, we can expect incremental improvements over the not-exactly-under-gunned A35, partly to give the A45 greater performance but also to justify the inevitable higher price. The old A45 started at £40k; the new A35 starts at £35k. So expect the new five-door model to start somewhere its predecessor and the the £49,805 M2 Competition. In pure performance terms, expect it to be the new hatchback benchmark.