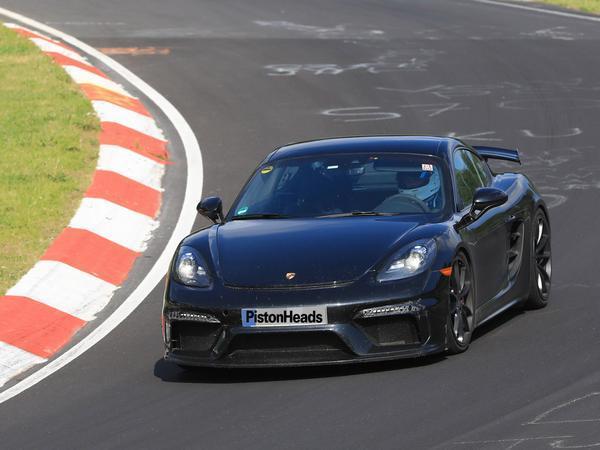 We'll let you into a little secret: these pictures don't actually appear to tell us anything new about the Porsche 718 Cayman GT4. There are the more prominent aero addenda, GT3 wheels, new exhausts and the sort of visual menace that a regular 718 could never match. However much was spent on it. Suffice it to say excitement is running pretty high for this Porsche, what with the first GT4 being one of the best cars of 2015 and the Motorsport department producing some staggering 911s since then.

It seems likely, again as we know, that the Cayman will borrow a different 911 engine this time around; with the 3.8-litre no longer in production, a detuned version of the GT3 4.0-litre is due to be dropped into the GT4. Crumbs. Given that both gearboxes are offered with that engine in the 911, hopefully both make it to the Cayman as well. Or perhaps just the manual - worked out OK last time, didn't it?

When our dutiful spy photographer has nothing to say about a new prototype beyond "has arrived at the Nurburgring" and "expected to be launched later this year", it's clear that there's little more to know right now. Hmm. However, it is worth noting that Porsche never actually issued a Nurburgring lap time for the last GT4 - this sportauto lap is the fastest recorded that we know of - and so the testing here could be a for a time to issue with the new car.

Think about it: the GT3 RS took 24 seconds off the old car with just a 20hp power gain thanks to its chassis overhaul, and a similarly extensive range of upgrades must be due for the GT4. Perhaps such an improvement is unlikely, but 10 seconds from the sportauto time for the old car would put it on a par with the same magazine's test of the Carrera GT. Wow. It would still leave the GT3 as top dog, too, the 991.2 recording a 7:18 last summer. There's a distinct possibility, therefore, that the slowest Porsche GT car available could lap the Nordschleife in less than seven and a half minutes...

Speaking of availability - even if we probably shouldn't - the Cayman GT4 is due to be revealed towards the end of 2018 for the 2019 model year. But then if you didn't know that already, you may well be too late. More news as we have it!