Jack Sears has been associated with the British Touring Car Championship forever: he was the first series champ in 1958, driving an Austin Westminster, and today his name adorns the Jack Sears Trophy for rookie drivers. Sadly, on Saturday August 6, the successful racer passed away, aged 86. And the BTCC has been quick to pay tribute to the racer known as Gentleman Jack. 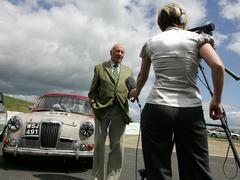 "It is with great regret and genuine sadness to learn of Jack's death," said BTCC series director Alan Gow. "I really liked Jack a lot... not only as an extremely talented and inspirational racing driver, but more importantly as a hugely popular, humble and impressive human being.

"Jack loved this championship and continue to play an active part in the BTCC right up until his passing." Indeed, he often presented the trophy named after him at the annual MSA bash; first created in 2013 for the top S2000 runner, it switched to honouring the independent driver who made up the most places over the season in 2014 and today is awarded to the top rookie. Ash Sutton is currently leading it.

Sears had to battle to get his BRSCC British Saloon Car Championship title (the precursor to the BTCC) in 1958, though. He ended the season at Brands Hatch tied on points with Tommy Sopwith. The organisers initially suggested the championship be decided by a coin-toss: outraged, the two drivers suggested a race instead, in two Riley 1.5s. In pouring rain, the drive against the clock for five laps before, for true parity, swapping cars and doing the same again (apparently, one Riley was slightly faster than the other). Sears thus claimed the 1958 title by an aggregate time 1.6 seconds faster than Sopwith. 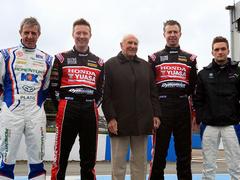 After winning the 1958 title, Sears raced on in the series for several more years, winning a class title in 1962 before scooping the championship again in 1963. He also raced at the Le Mans 24 Hours in 63, scoring the Ferrari 330 LMB's best finish with a fifth place. He retired from the sport a few years later following a heavy accident. Jack's son David continued the family's racing dynasty, himself driving successfully with results including a podium in the 1990 Le Mans 24 Hours with Tiff Needell and Anthony Reid. David later switched to team management with David Sears Motorsport and Super Nova, and helped drivers including Mark Webber and Juan Pablo Montoya break into F1.

There will be a minute's silence for Sears at this coming weekend's BTCC round at Knockhill on 13/14 August.

From Zeroes to Heroes | PH Competes

Why a new V8 Defender is just the start for Bowler

Legendary BRM V16 is back