Where to begin with the

? Given Ben Bowlby is Nissan's LMP1 Team Principal it was reasonable to expect something mad but this could hardly be less conventional. It's bonkers. 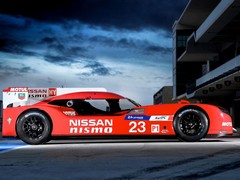 We've not seen anything like this at LM before!

It's a petrol hybrid, so at least shares some something with its LMP1 rivals. A 3.0-litre twin-turbo V6 petrol engine provides 550hp with an energy recovery system providing about another 700hp. There's a five-speed sequential gearbox too. With power going through the front wheels. Through the front wheels. In Nissan's words: "The Nissan GT-R LM NISMO is in automotive-speak a front-engined, front-wheel-drive car... We've used the relatively low-powered internal combustion engine to drive the front wheels and then we add power from the ERS to augment acceleration." See, mad. Or innovative, according to Nissan.

To that end the tyres, weight distribution and aero are all designed to give that front end a fighting chance. The tyres are 14 inches wide at the front compared to nine at the rear, for example. Nissan claims a "harmony" between aero centre of pressure, centre of gravity and tyre capacity so it will be fascinating to see the results. The kerbweight target is 880kg, although the powertrain (engine, energy recovery, gearbox) currently accounts for 450kg. The GT-R LM NISMO will run in the 8 megajoule per lap hybrid class. Don't ask us to explain those regulations. 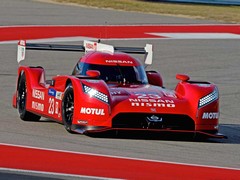 Watch out Audi, Porsche and Toyota?

Gran Turismo and Japanese Super GT fans will recognise the Motul livery from various GT-Rs and Z-cars from the past couple of decades. Motul has been announced as lubricants partner with Michelin developing tyres particularly for this application. Can't be an easy task!

Testing for the GT-R LM NISMO is continuing in America at present with drivers to be announced soon. The World Endurance Championship for 2015 begins at Silverstone on 12 April with of course the focus on Le Mans in June.

And finally, it wouldn't be a proper motorsport programme without some sort of road car link. Fear not, the GT-R won't be going FWD any time soon. But NISMO's head of marketing Darren Cox has said the project "makes the connection between NISMO on the road and NISMO on the track... We will innovate off the track as well as on it." How far off is the hybrid GT-R? Anyway, more on the LM NISMO will surely follow leading up to April. See below for Nissan's particularly emotional launch vid and pics for the craziest Le Mans car since, well, the Deltawing. Bring on the new season!