In order for you to understand the pant-dampening combination of terror and joy that comes with driving a pair of GT3 racing cars, some background info first. Because it will help explain the emotions inspired by driving the cars you see here. 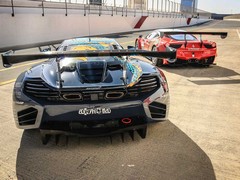 In 2005, GT3 started as what some saw as the poor-man's entry into World GT racing, but now that reputation has been totally transformed. Group GT3, as it's officially recognised, originally sat below GT1 and GT2, and above GT4. But as the high-tech GT1 and GT2 cars disappeared into their own event-horizon of cost and obscurity, the manufacturers moved into GT2, then GT3 en masse.

Now you can race the same car anywhere from America to Asia, from England to Bahrain. You can order your class-compliant car bearing badges as diverse as Bentley, Maserati, Porsche, Ferrari, even Nissan or Ford. There are around 35 models homologated according to this list.

R-E-S-P-E-C-T
Therefore the first emotion is respect. Respect for the manufacturers, teams and drivers in what is now the most glamorous and sharpest class of production-based sportscar racing today. Basically I'm a huge GT3 fanboy. In the VLN I have stood in the pits watching 25-man crews working on GT3-spec AMGs, BMWs, Astons and Audis, dreaming of the day I could drive such a thing.

The second emotion is fear. Because that day is today.

After blatting around in a range of amazing racing cars, I now have just 10 laps left. They will be divided equally between a McLaren 12C GT3 and a Ferrari 458 Italia GT3.

Third? Amazement. The 12C was the newcomer to sportscar game but it was immediately setting the pace at tracks all over the world. It's also the star of the fastest lap of the Nurburgring 24-hour course I've ever seen - namely Kevin Estre's totally bat guano pole position run earlier this year. 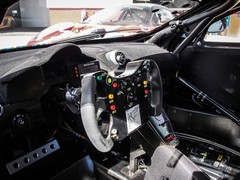 Stretch out with your feelings

Sliding into the carbon tub of the McLaren myself the view ahead is not dissimilar to that from inside a monochrome Millennium Falcon. Rows of buttons dominate the centre console. Most of them have two or three positions and slightly cryptic labeling. The simple carbon wheel of the regular car is replaced with an F1 style 'steering handle'. It too is covered in buttons. For my five laps the positions have been fixed and I'm under strict instructions not to fiddle.

Starting the car is relatively simple, but pulling away isn't. As with all GT3 cars, the McLaren is fitted with a bespoke sequential gearbox. At speed it's a clutch-free operation. But there is a clutch pedal for pulling away - see the video below for the full details of its operation. It's not easy.

The McLaren lurches out of pitlane like it's got a kangaroo in the tank. Immediately the differences between this full-on racer and the road cars become apparent. Differences like wind noise, vibration, bumps, and heat. Oh God, the heat.

Full afterburner
It's like my eyeballs are being exposed to Gordon Ramsay's best creme brulee burner. The latent build-up during the in-car briefing was interesting enough, but now it's all being ejected right into my face. It takes almost a full lap for that built-up heat to work through the system, but it finally seems to subside. Or the rampant acceleration just throws it to the back of my head. 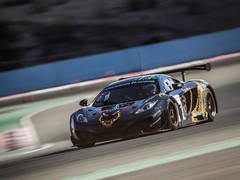 About as fast and difficult to pilot too

Because this car has torque. It has snap. Even though the restrictor plates and the balance of performance should prevent the 500-ish horsepower GT3 car from feeling like its 625hp cousin, it actually feels faster. There's no lag, no delay, just massive shove from anywhere in the rev-range and whichever of the trigger-shifted ratios you happen to be in.

But it's not all milk and honey. The steering is heavy, and the rack is a little slower than you might expect. I swear you can feel individual pieces of gravel roll under those oversized slicks such is the feedback but you need to throw your shoulders into the movement at times. In the tighter corners of the Dubai Autodrome your hands will begin to cross over, left to right. With the F1-style helm you just have to commit to it. No shuffling possible.

Oversteer is best described as frequent and exciting. Much like the heroine being attacked in a horror film, it's easy enough to predict but I'm still jumping when it hits. And the braking is hard work. Really hard work. There's no servo assist here, just a pure hydraulic system with an ABS cut-out. You push all the fluid yourself.

Each lap passes by in a blur of razor-sharp inputs. The car might be dancing through the corners, but the driver is sweating like a pig farmer. Even as I'm shown the pit-in board, I feel like I'm a million miles off the pace. I want to drive forever, but grudgingly admit temporary defeat. My arms are over-worked, my brain is overwhelmed, and my legs? Don't ask. 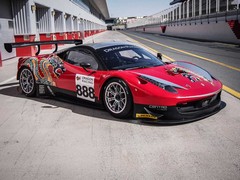 And this is the friendly option?

The adrenaline-enhanced joy of driving a car this special is tempered with a shade of personal disappointment. I quiz Dragon Racing's Director of Coaching and Racing, Rob Barff, on what I'm doing wrong.

"You're not pushing hard enough and, no offence, but I really don't think you ever will today. Can you do this?"

He hops off his seat, crouches down with knees bent to his chest and then balances on one foot. Then he pushes his entire body smoothly up to full height with one leg. And down. And back up. Point proven.

"You're braking with maybe 65bar in the lines, the pros will be pushing the fluid at over 100. In panic situations we've seen 200 on occasion. It's something you'd never, ever, do in a normal car."

Next emotion? Determination. After analysing the data and listening to Barffy's pep-talk, I approach the Ferrari in a completely different frame of mind. 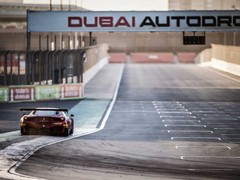 Dale waltzes off into sunset with an Italian

Inside, the 458 Italia GT3 is a race car but very different to the McLaren. While I still don't like the Ferrari's column-mounted paddles, there's no denying the comfortable psychological safety blanket that is a full-size wheel. Not that the 458 needs much counter-steering action...

It's the epitome of reassuring performance and the first full lap is bliss. Maybe it's my mindset, maybe it's the experience of driving the McLaren, but the Ferrari feels easier to drive. The naturally aspirated V8 might lack the torque of the McLaren but its lower 8,000rpm top end is still astounding. It howls, although with a rough edge to it, much like a tiger with the family jewels in a snare. There's no slide-inducing torque to dislodge the chassis from its line and the steering feels a little lighter too, while still holding on to the same level of magical feedback as the McLaren.

While the McLaren was wearing a 'new' set of 2013 tyres optimised for European climates the Ferrari is on a used set of Gulf-spec tyres. And mid-corner it shows. Only the most enthusiastically early throttle applications unseat the Italia. Then the required countersteer is telegraphed to your wrists so precisely while communicating the slide almost before it has happened.

Every lap is a joy in the 458, and though I understand my limitations, the mashing of the brake pedal into the firewall takes on new proportions. I'm happy. But all too soon the 'PIT' board appears over the wall, and it's time to give the car back. 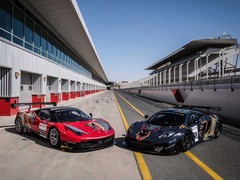 The difference is between pro and am

Driving a thoroughbred GT3 car on a world-class racing track surpasses already lofty expectations. At first glance they're both easy to drive, with mechanical and aerodynamic grip far in excess of any road or track day car. After all, the very nature of many GT3 series means that for every pro driver, there's an 'amateur' teammate too. The theory is that you can make up for talent with a well-stocked wallet and an excellent Pro in your team.

At face value I think the Ferrari 458 Italia GT3 epitomises this. Its ease of use is on another plane to the McLaren. The motor is more visceral and easier to exploit. It's the car of choice for the moneyed racer.

By comparison the McLaren is sharper and a whole lot less approachable. The gap between the two machines might have been a whopping two seconds in my hands, but it's easy to see why when you watch the video.

The one time in the whole day my lap times went back up instead of down was driving the 12C GT3, overheating tyres playing a part. Would identical rubber to the Ferrari back up my gut feeling about its sharpness compared with the Italian machine? Barff suggests it would have done.

"The Ferrari is faster, sooner, for the gentlemen racers. It's often an easier car to drive. But the pros will be quicker in the McLaren. It just has that little more potential. You didn't do bad in the Ferrari, but you'd need some more time in the McLaren to let it click."

Ahh, satisfaction. My times in the Ferrari wouldn't be out of place in a Pro-Am grid. But the counterpoint is that the factory driver was nearly four seconds quicker on the same day in the same car. So now I'm even further in awe.

Respect, fear, amazement, joy, determination, satisfaction and awe. I can try and convey these emotions of the day through words. But both of these cars will achieve it wholly more decisively if you ever get the opportunity.