We get to drive the Le Mans racer that won 2019's World Endurance Championship. Pinch us 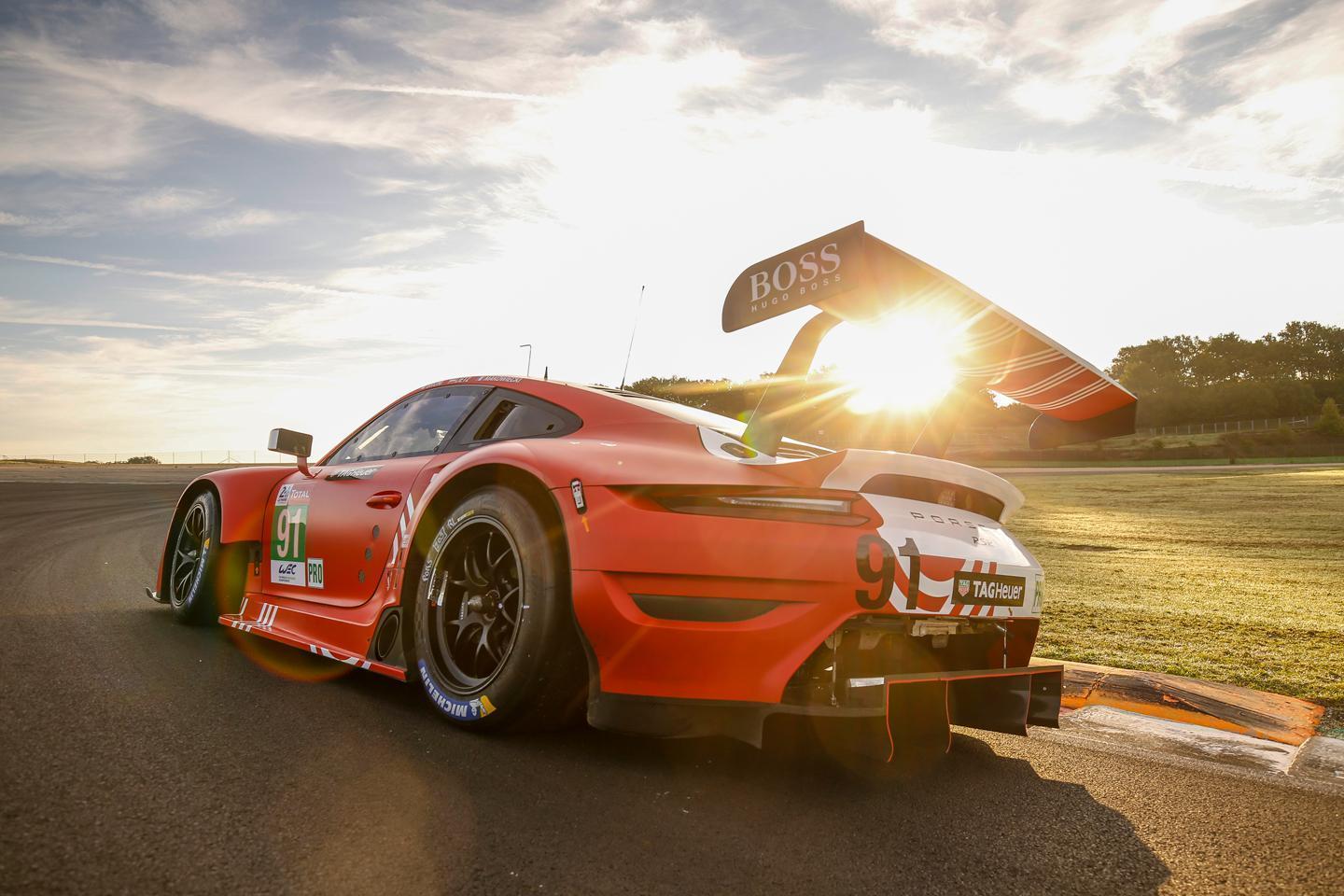 Porsche’s 911 RSR-19 is the real deal. The full monty. Sharing little more than a silhouette and only the innermost section of the chassis with the road model, it’s a thoroughbred race car. Wherever you look it ranks top of the Proper scale. First and foremost there is the engine, which is mid-mounted rather than rear, meaning the driver has nothing more than a thin carbonfibre bulkhead to dampen its flat-six blart. You’ll likely be familiar with it if you’ve been following the World Endurance Championship: the RSR’s 4.2-litre motor is about as vocal as they come. Especially when the Le Mans-spec side exhausts are attached, as they are for our test at Italy’s wonderfully old school Autodromo Vallelunga. Ear plugs are mandatory.

Vallelunga is a fitting place for a 911 RSR test because its two-mile layout is packed with both fast flowing corners and technical hairpins, perfect for demonstrating the immense downforce and low-speed agility of Porsche’s competition machine. We’re among the very first outside of Porsche’s factory squad and a small handful of customer teams to be granted access to the fully-fledged GTE car. But we’re assured by Porsche factory driver Gianmaria Bruni – who’s raced the mid-engined RSR since its 2018 debut – that it’ll be on our side today. 23 degrees ambient and a sun-baked asphalt surface are certainly about as much as we could have asked for. But a 515hp GTE car with an enormous wing and diffuser is, well, exactly that.

"You can drive it like a Cup car," responded Ben Barker, friend of PH and Gulf Racing driver, when asked via text for some words of wisdom. “There’s high aero load in the high-speed corners, but you’ll need more of a mechanical driver technique for slow speed rotation.” Apparently Vellelunga’s first sector is fast enough that I’ll be able to “lean on the downforce,” as the RSR “takes a lot”. “Don’t be shy of loading the car quickly through faster steering application in high speed,” adds Barker. It all sounds very good. But in the morning when Porsche starts up that engine with a deafening roar, the reality of it all quickly dawns on me. This is the spec that won the 2019 WEC.

The RSR’s 4.2-litre – Porsche’s biggest boxer motor yet and a heavily evolved design from the road-spec 4.0 we know and love – revs to 9,200rpm and with a six-speed sequential gearbox, it wants to be on the boil all lap long. The chassis, double wishbon’d all-round with adjustable coilovers and anti-roll bars, as you’d expect, is RSR-specific and the steel brakes, 390mm in diameter up front, will obviously take the worst kind of pounding and still stop the 1.2-tonne racer on its nose. Porsche moved the engine forward in the RSR-19 to clear space for the rear diffuser, as well as shift the weight balance forward. Aerodynamic grip is therefore said to be enormous, while mechanical grip shouldn’t exactly be lacking with the soft and sticky Michelin slicks underneath it all. The team to set the car up today are fresh from the WEC, so there are no excuses. Beyond supreme nerves.

After a double espresso and only one sighting lap in a 911 GT3 RS (quite restrictive, I reckon, for someone who’s previous experience of Vallelunga is restricted to YouTube onboards), I'm in the car. The seating position is predictably low - you’re barely a couple of inches off the pitlane surface - with the wheel and its expanse of buttons and digital screen straight ahead. Both it and the pedal box can be adjusted with just the pull of a lever, so as to make driver changes in endurance racing quick and easy. I opt for slightly bent arms and legs, so when the harnesses are tightened and the nets either side are attached, it’s a remarkably snug place to sit in. The cockpit’s hot, too, and you can hear the computer processor’s fan in the opposite footwell working overtime to keep the hardware cool. Thankfully, GTE cars run with air con out on circuit, so when the engineer signals to fire the engine I can focus on the job at hand as cold air fills the cabin.

Even with ear plugs and a helmet full of padding, the naturally aspirated flat-six is really, really loud. It fires with a stab of revs and settles into a raucous idle, before its bark is echoed off the pitwall as I apply some throttle. The foot clutch is used only to pull away and it’s heavy (after, you’re free to left foot brake), but the motor’s instantaneous responses – it’s quite possibly the quickest reacting motor I’ve experienced – and unexpected smoothness means there’s none of the usual jumpiness that so often ends up in a stall. You pull away like you would in a highly-strung road car, click into second and let the pit limiter keep you at 60kph, motor chuntering into the electronic ceiling. Once you’re over the pit exit white line it’s a simple click of the button and the RSR explodes forward, revs firing upwards in an instant.

515hp isn’t exactly mind bending these days, but the closeness of the sequential ‘box’s ratios, not to mention the thud that each upshift pummels through the chassis, certainly makes it feel rapid on the approach to 150mph on the 547-metre straight. The shift lights flash up and down like strobes. And what a peach of race engineering the motor is; functioning so in tandem with your right foot that it appears to be tethered to your synapses in a way no road car engine could ever hope to be. The RSR doesn’t initially feel like a 911 at all; the nose doesn’t ask for load in order to bite - there’s just immense amounts of grip. And the steering, which is hydro-electric assisted but offers bags of information under load, isn’t overly fast so you’re encouraged to hammer in to Vallelunga’s fast entry bends without much fear of oversteer. The brakes are phenomenally powerful and limited only by the strength of your left leg. Suffice it to say the pace quickly builds.

Traction is nothing short of unbelievable. Sure, hot slicks and warm Italian asphalt go together like bread sticks and cheese fondue, but honestly, the rear axle’s ability to press the engine’s explosive delivery into the ground is mind blowing. Ten laps are obviously not enough to fully reach the car’s on-throttle limits, but I'm still able to confidently power out of the hairpins and get greedier and greedier on the exit of the last bend, a long right hander, with a handful of lock on. The car just digs in and hauls you onward. The GTE-spec traction control only needs to intervene if you get really, really greedy; even on bumpy corner exit kerbs it allows for a tiny degree of slippage, which sends that flat-six singing towards its limiter. What a feeling!

Confidence sky high, on the final two runs I really go for it. Turns out the RSR’s nose is happy to be thrown into a bend with a trailed brake and the front axle can indeed be made to slightly push when you’re really on it (like a 911); but that only serves to increase the entry speed (and lateral force) into the double apex turn 14-15. Despite the enormous speeds the car rotates predictably thanks to its inherent balance, and with the instantaneous response of those controls, you’re never more than a degree of throttle or steering angle from gathering it all up. You can properly wring the RSR's neck and it will reward rather than complain, corner after corner, lap after lap. Ten laps are so easy for it that the team doesn’t even bother sticking fans on the brakes when I return to the pits. The same can't be said for me. Pumped full of adrenaline and covered in sweat despite the cooled cabin air, I need of a lie down. Five minutes later the next journalist roars back out again at full pelt. That’s what Le Mans-grade engineering buys you.

It’s only afterwards that I realise just how physical the whole experience has been. I'm shaky, and my left leg is left trembling for several minutes such is the workout required to get anything close to the best from those anchors. My quickest lap, a 1:40.2, is some 3.5 seconds slower than Bruni’s best of the morning (and I had the advantage of a couple degrees more ambient), so I’m happy, but also newly aware of the level of commitment required to get the best from the RSR. To drive at his level – for an entire stint, surrounded by dozens of other cars and in changing conditions with wearing tyres, and sometimes through the night – demands the kind of respect which is always reserved for top level sportspeople. Amatuer racing is just that; this is not just a bit of fun. It’s very serious, and not just because the machine’s limits over the rear axle are so high that that it you could spend all afternoon daring to approach on them. Still, in this setup at least, the RSR is always on your side. It's the most complete race car I’ve ever driven.