"I spotted a Renault Zoe and thought it would make the ideal rally car." Hardly conventional thinking, but then Ellya Gold isn't your average enthusiast. He's the brains and force behind eRally, which is working towards creating the world's first electric rally championship. 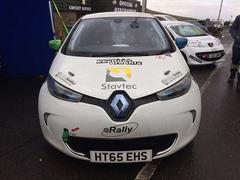 We caught up with Ellya and the eRally team at a demo run with Josh Hislop at the wheel as part of the Grant Construction Stages Rally at Knockhill Circuit. The compact Zoe makes the perfect base for a number of reasons. Firstly, the championship is aimed at drivers aged 14-17 entering the world of rallying for the first time, so the car needs to be affordable to run alongside the existing Formula 1000 series. It also has to be something that's competitive, which has been proved in tests of the prototype car you see here. So far, it's put in stage times quicker than a Ford Fiesta ST200.

There are a number of challenges in building a battery-powered rally car. The first one is range. "With a full charge, the prototype has a range of around 23 miles per charge in competitive driving," says Ellya. "As most rallies this car would enter have a total mileage of 35 miles, this isn't a problem, so long as you can recharge between stages."

Rather than relying on the existing charging network, eRally is working with a Scottish-based company to develop its own mobile rapid charge station. This will fit inside the service van, so there's no need for a separate support vehicle. Ellya is also confident the latest Zoe with its longer range will offer rally drivers around 40 miles of battery power. 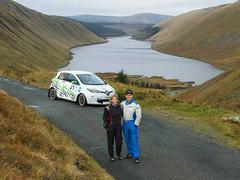 At the moment, the prototype is running with a completely standard Zoe battery and electric motor, but the team points out there's plenty of scope for increasing the performance. "The car is set up very much for reliability," says Jean Hay, Ellya's co-driver. "We know Renault has tested a Zoe with a stronger motor, so this will be something to look as we develop the car. However, with around 162lb ft of torque at the moment, the eRally car has around twice that of any of its petrol-engined rivals in the Formula 1000 championship."

A big advantage of this eRally car over the more traditional route is its regenerative braking. Not only does this help top up the charge, Ellya points out the brakes are more than up to the job in standard form. "When you stamp on the pedal, the car stops on a sixpence," he says. "It also saves on pad wear, so there's less work needed during a service halt and it reduces cost."

The Zoe tips the scales at around the same as a standard road version at 1,300kg. By stripping the cabin of trim and sound proofing, it's offset the addition of a roll cage and plumbed-in CO2 fire extinguisher system. Other changes to the car are limited to the wheels, tyres and Gaz dampers. "The handling is so good on the Gaz shocks that I can't wait to get them fitted to my Zoe daily driver," laughs Jean. 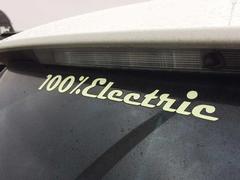 Future modifications will include removing the top speed limiter that currently restricts the Zoe to 87mph. Ellya is also looking at how to remove the ABS and ESP systems electronically to give the driver greater control. "To do this with the prototype was a bit nerve-wracking as we had to remove fuses," he says. "Now we know what to do, it's a lot simpler. That applies to every aspect when we come to build customer cars as the process will be streamlined and we know which parts to order rather than the trial and error of building the first one."

The plan is to offer a brand new Zoe built to rally spec for £10,000, which will include some subsidy from a series sponsor. This will include the battery pack, which most Zoe customers lease separately from the car.

This year is all about proving the concept and reliability of the eRally Zoe, but Ellya says they have already had interest from people wanting to place deposits. There will also be the opportunity to hire one to either use for one-off entries or try-before-you-buy.

Ellya is confident the appeal of the car will make it a success. "The simplicity of the Zoe makes it ideal for young rally drivers as it's impossible to stall. Plus, there are only two pedals, so anyone who has driven a kart will feel immediately at home," he says.

One final area that Ellya and Jean say is often mentioned is noise, or the lack of it from an electric rally car. "Once you're inside with helmet and intercom, you don't really notice the engine sound. For rally teams, it's about setting the best stage times and we reckon the eRally Zoe can do just that."