You've heard about the new BMW 8 Series, right? Not only has there been

, we've already seen the racing version of a car that's not yet in production. An

has been confirmed, too. If you don't know the BMW 8 Series, then get to know it. 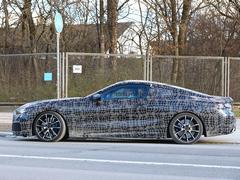 Here is our best look at it yet, and there's lot to be encouraged by. The 8 is clearly a big car, probably larger than any 6 Series and evidently a rival for cars like the S-Class Coupe and Bentley Continental GT rather than anything so ordinary as an Audi A7. To our eyes it's sleek as well, low and wide and well-proportioned but with familiar BMW styling cues throughout - you can't hide those kidney grilles entirely! The side view is particularly nice, with a narrow window line and tapering, swoopy rear deck. The design must be alright if it looks this good in camo!

Other details worth noting? Beyond the crimes against exhaust pipes at the back, there appears to be quite a few sensors around the front of the car - expect the 8 Series to usher in the next level of BMW's autonomous and safety tech, building on what's already established in the 5 and 7 Series.

As far as we know, the car is still due a reveal at some point next year, so not too many months to wait. Don't forget that the GTE car will be competing in the World Endurance Championship and American IMSA WeatherTech sportscars from January as well. Looks like 2018 is going to be a big year for BMW!