Not only will there be an M 8 Series for the first time, but it's going racing too!

The Nurburgring 24-Hour was approached rather enthusiastically by BMW at the weekend: no fewer than nine manufacturer-supported customer teams entered, with a strong second place finish for the Rowe Racing team. 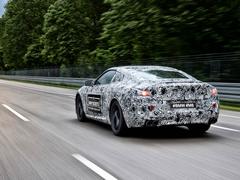 Pesumably this is the autobahn test route

More than that though, BMW used the race to show off its latest M Division product: the M8. While a very early look - the concept of the

was only shown last week - there's cause to be rather excited about this upcoming M flagship. See the bigger wheels, four chunky exhausts and prominent air intakes for a start; more than that though, we would expect the M8 to borrow technology from the

. And when Autocar has already

of the saloon as "adjustable and entertaining but composed, precise, tractive and fast with it", then there's much to be encouraged by with the coupe.

BMW M boss Franciscus van Meel has described the M8 as enhancing the 8 Series experience with "added track ability and generous extra portions of dynamic sharpness, precision and agility." Watch out S63 AMG then, it would seem... 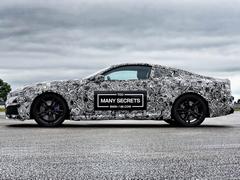 Can the big BMW deciM8 its rivals?

And they're going to race it. Seriously. Just in case it seemed that the M6 GT3 was not big and bad enough for the world's race circuits, there will be a an M8 GTE bringing BMW back to Le Mans. It will make its debut at Daytona next January, with BMW Motorsport Director Jens Marquardt saying that "I can promise you that the BMW M8 GTE will look spectacular." Given the appearance of recent BMW racing models - think Z4 GT3 and M235i Racing, for example, we have no reason to doubt that.

This all sounds like very good news for fans of both BMW road cars and BMW motorsport, particularly as a car like an M8 feels like a more traditional style of BMW M model. In fact it was a model attempted 25 years ago, the original M8 prototype sadly not deemed viable in the cash-strapped early 90s. Its time has finally come!