Up to 677hp, manual gearboxes and rear-wheel drive - America shows Europe how it's done, again 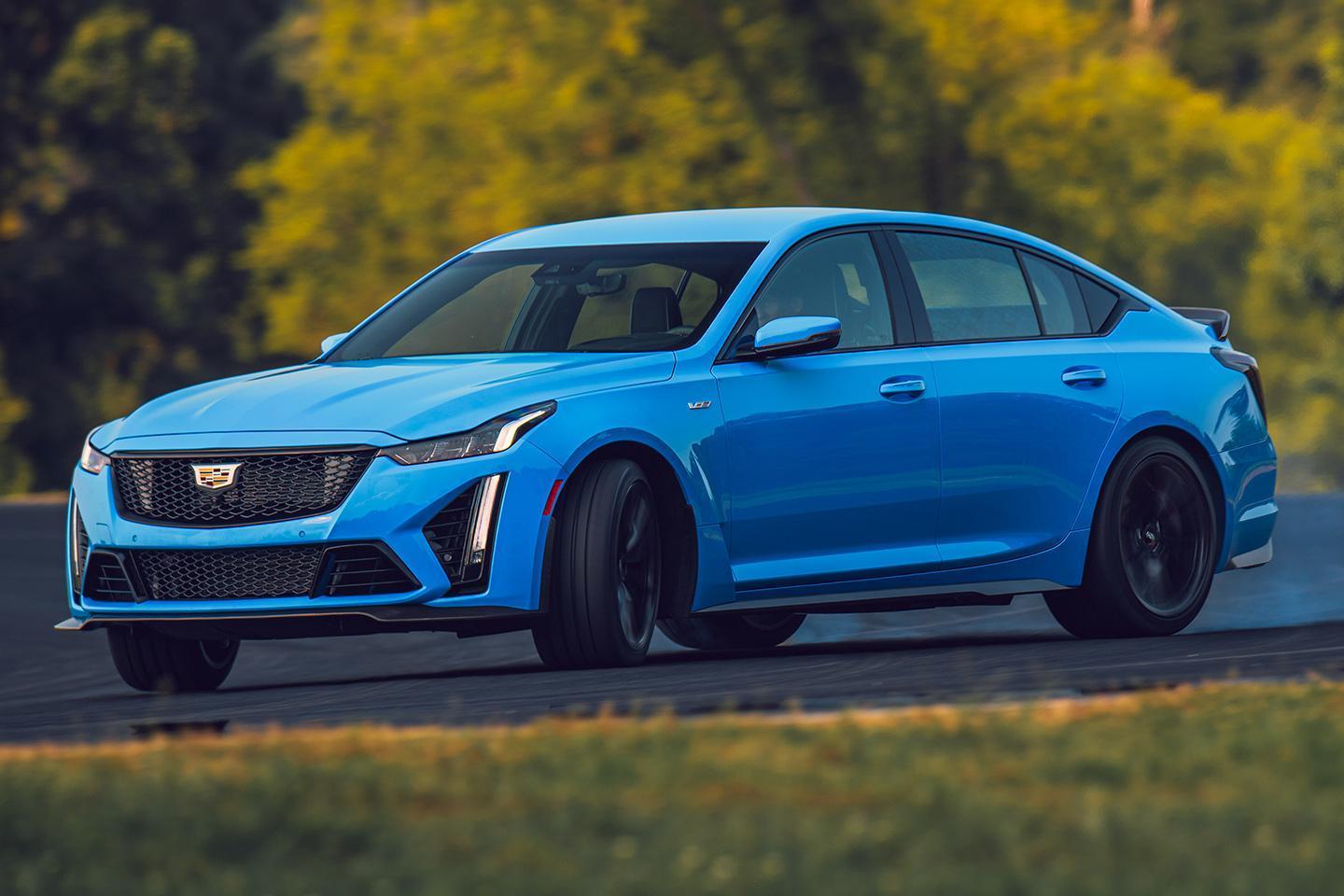 For a decade and a half now, the V-Series models have put paid to the notion that Cadillac can't build driver's cars. The first CTS-V of 2006 lapped the Nurburgring in 8:19 (with just 400hp), the second one dropped that below eight minutes thanks to a supercharger and the most recent generation gave a great account of itself against the current BMW M5. In North Wales, no less. Both CTS-V and the smaller ATS-V have been lauded for years as proper hero machines.

Now, sadly, the era of V6 and V8 supersaloons with manual gearboxes and rear-wheel drive is coming to an end. Cadillac has committed to a fully electric future, with the current line up representing the last combustion engined Caddys. "We will not be selling ICE vehicles by 2030" said Cadillac brand boss Rory Harvey in April, which is sad. But praise be, the old ways are going out in spectacular fashion...

This is the Cadillac CT5-V Blackwing (the blue one) and CT4-V Blackwing (the orange one), the final petrol-powered V Series Caddys. Respectively they replace the old CTS-V and ATS-V, top the current V-Series range, and are said to be the fastest production models ever produced by Cadillac. Apparently, they reach "new heights of performance, driver technology and craftsmanship."

You couldn't wish for a better supersaloon spec. The smaller CT4 is V6 powered, though that still means 3.6-litres, two turbos, 478hp and 445lb ft. That's sufficient, even with the standard six-speed manual (a 10-speed auto is optional) for 4.1 seconds to 60mph, a 12.1-second quarter mile and 189mph flat out.

The GT5-V Blackwing is where things get really serious. The 6.2-litre battleaxe of a supercharged V8 is having one last valedictory run, here with a stupendous 677hp and 659lb ft. There's still a manual, too, which will get you to 60mph in 3.6 seconds - the auto shaves a couple of tenths. A quarter-mile time of just 11.3 seconds is claimed (at 129mph) and the top speed is "more than 200mph". To think what BMW and AMG charge additionally to let buyers do a mere 189...

The manual is notable in both, of course, given the market's move away from self-shifters. But don't forget the North American appetite for a stick and a third pedal - the new BMW M3 is offered with a six-speed over there that's denied to the UK. Cadillac is simply giving the people what they want (and buy): "For nearly two decades, enthusiasts have told us how important it is to have the control of a manual gearbox in their performance sedan," said Mirza Grebovic, Cadillac performance variant manager. "The ability to choose the driving experience they want is a luxury in and of itself, allowing them to feel more connected with the vehicle." Amen to that.

But big power was never the USP of the V-Series Caddys - it was simply another reason to want one. Once more there's a focus on both road and track handling for the CT4 and CT5: "The more time you spend in them and the harder you press them, the more they reward" added Grebovic. To that end, the new cars feature the fourth generation of Cadillac's magnetic dampers, bespoke Michelin tyres, the biggest brakes ever fitted to a Caddy road car (plus optional ceramics), the most downforce ever made by a V-Series model, an "enhanced" limited-slip diff and suspension revisions that offer "more precise, engaging connections with road or track." Yes, we really, really want a go, too.

Unsurprisingly, the first 250 CT4 and CT5 Blackwings sold out in minutes; these will be Collector Series cars with emblems celebrating the fact. The rest of the range is on sale now, albeit with limited availability; awesome though these two clearly are, you sense the wider Cadillac message isn't behind track-ready four-doors nowadays. So, US-domiciled PHers, move fast! The CT4-V starts from a piddling $60k (£43,500), rising to a "fully configured" MSRP of $87,775, or £63,500. For reference an M3 kicks off at $70k in the States. For the CT5-V Blackwing, buyers will be asked to part with $84,990, or $125,980 for the fully configured one. Based on first drives Stateside, and from the superb specs we've already got together on the configurator, they look like they'll be worth every single cent. Get one while you still can!