Time moves quickly at Tesla. It wasn't all that long ago the

was announced, melting the Internet with acceleration videos and making even the fastest cars worry at a set of lights. Reaching 60mph from rest in a little over three seconds is absurd for a two-tonne saloon. 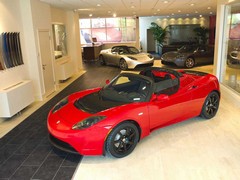 The Roadster will return too, says Tesla

But that was a P85D with an 'Insane' mode. Now there's a 'Ludicrous' mode. That means the car is capable of 0-60mph in 2.8 seconds, or just three tenths behind Porsche's claim for a 918 Spyder. The quarter-mile takes 10.9 seconds. Very, very rapid in other words.

Ludicrous mode came about through Tesla's desire to make a powertrain that will last a million miles. A different fuse for the battery with its own electronics and a mini lithium-ion battery plus an upgrade to the main pack contacter allows pack output to safely rise from 1,300 to 1,500 Amps. In EV speak this means even faster. It is available as a $10,000 option to new customers, or $5K to existing P85D owners for six months.

Here's where it becomes a little confusing. Tesla has also launched a 90kWh battery pack upgrade for the 85kWh Model S, which increases range by six per cent to around 300 miles at a constant 65mph. But it's a very different add-on to the Ludicrous mode. In Tesla's words: "the battery pack size upgrade [90kWH] and the pack electronics upgrade [Ludicrous mode] are almost entirely independent. The first is about energy, which affects range, and the second is about power, which affects acceleration." The full release is here for more detail.

Finally, some news on Tesla's upcoming models. Elon Musk has said deliveries of the Model X SUV are due in a couple of months and the Model 3 will arrive in just over two years. There's another Tesla Roadster coming too, although it's four years off at present. It promises the one thing beyond ludicrous: "Maximum plaid." Anyone?