The Norfolk-built shooting brake is complete by the looks of it...

It's complete! Certainly that's what Qwest Automotive, creators of this remarkable Tesla Model S Shooting Brake, is saying. In a Tweet over the weekend it said the car "connected to the #ElonMusk network became visable and moved", which is significant progress from when we saw it last month.

Since then there have been no further updates, but how exciting to see such an ambitious project take shape. More when we see it...

can arguably claim credit as being the car which brought EVs in from the cold. Whatever the company's current production and profitability shortcomings may be, few could argue with the crucial role it's played in helping to turn the tide of public opinion. You certainly wouldn't have seen a G-Wiz wowing PHers at last year's

the way one member's P80D did. 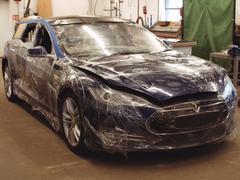 Familiar, but also very different too

But even with the Model X now available, the Model 3 in production and a new Roadster coming soon, there is one noteworthy gap in Tesla's lineup - to us Europeans at least. Estate, wagon, shooting brake, tourer - call it what you will, Tesla doesn't offer one, and nor does it have any plans to.

This was a problem for Model S owner Phil Hayton, who found that his pride and joy was somewhat lacking when it came to accommodation for Ted, his canine companion. An issue he relayed to a friend one night at the pub - where else does this sort of thing ever start?

Luckily for Phil, that friend was Dorian Hindmarsh, a man with 20 years experience in the automotive and motor racing sectors. He in turn soon sought out the expertise of Jim Router, an engineer with some serious credentials of his own. Having tried his hand at Le Mans and supercar engineering, Jim has worked for a succession of top marques, including spells at Lotus and McLaren - he's also the designer of the wonderfully excentric Stealth Car.

They got straight to work, developing a unique new body section to transform the Model S into a suitably stylish and capacious estate. The proportions in the renderings do look decidedly - how to put it kindly - aftermarket. But things seem much more promising in the flesh, and this doesn't look to be just another garden shed cut and shut job. Far from it in fact. 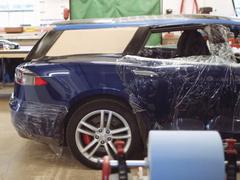 What's the Tesla mode beyond Ludicrous?

The new sections of the car are manufactured from carbon fibre by the specialists at Formula 1 component company CODEM Composites. And the body shell is bonded to the Tesla's Aluminium frame using the latest aeronautical chemical bonding systems before being painted. The new rear three-quarter and roof glass is made by Pilkington too, to ensure quality comparable to that of the car's original glazing.

Tesla was made aware of the project from the outset, and seems to be on board so long as none of the high voltage electrics are tampered with. This should mean continued support for the shooting brake when future updates are remotely released - there's no word on what it's done to the warranty yet though...

The whole operation has been branded as QWest and, in the tradition of the British coachbuilder, plans to modify more individual client cars on demand, rather than selling ready converted cars to new buyers. Going forward there will also be bespoke interior trim offerings from teak floors, to Nappa leather, with Qwest estimating a 10 week conversion time depending on spec. They also hint at the prospect of "other EV and Hybrid vehicle coach building and engineering projects" to come.

Whatever is next for QWest, Phil and Ted are soon to be the owners of the world's first EV shooting brake. You can learn more about the project, and see what happens next, in the latest episode of Fully Charged, here.