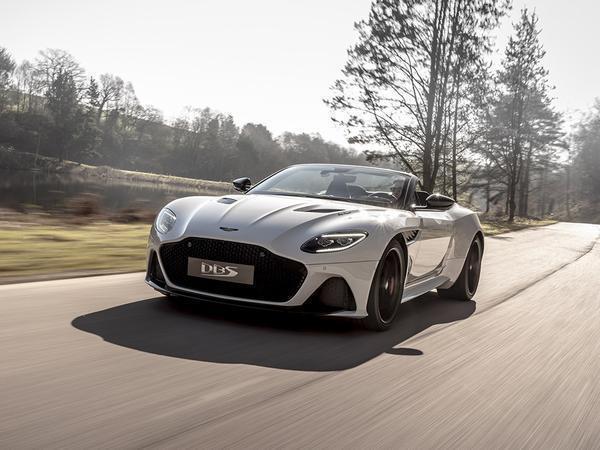 We liked the DBS Superleggera when we drove it last year. It's an easy car to like: it has 725hp from a V12 and an Aston Martin badge and a body befitting both. Its drawbacks - such as they are - is that we also like the Ferrari 812 Superfast very much (because it's stupendous) and the DB11 AMR (because it's £50k cheaper and no less lovely). Which did rather leave the DBS parked at the end of a sticky wicket.

Not so the Volante. By shedding the roof, Aston has arguably elbowed some additional breathing space for its flagship model. You could have the DB11 in open-top format - but only with the 4.0-litre V8 in saloon-grade 510hp format. The Superfast, for now at any rate, is hardtop only. And yes, there's a forthcoming V12-powered Bentley GTC and the quicker still McLaren 720S Spider available, but they sit at either end of a different scale.

By delivering the fastest convertible in its history, Aston Martin will feel like it has a fair chance of cornering the rarefied market for top-down-abled super GT cars. To that end, it has apparently dedicated itself to retaining the 'powerful dynamics, aggressive poise and astonishing performance' of the coupe.

The newcomer is underpinned by the same 5.2-litre twin-turbocharged V12 engine, which also delivers 725hp to the rear wheels via an eight-speed ZF automatic, alongside 663lb ft of torque. The latter is available between 1800-5000rpm so expect the Volante to preserve the DBS's talent for pulling like a runaway train - even with the 170kg that a calculator says it has gained in dry weight. It'll be the latter responsible for a 0.2 second increase in 0-62mph time (3.4 to 3.6) but it doesn't prevent the Volante from achieving the same 211mph top speed.

Aston doesn't detail the structural engineering required to make the DBS ship-shape without a load bearing roof (although you can bet your bottom dollar it's the same thickening of the sills, stiffer bushes in the rear subframe and redesigned cross member that it deployed in the DB11 Volante) but does divulge that at V-max the aerodynamically fettled convertible is producing just 3kg of downforce less than the coupe. Which is nice.

Of likely greater significance to its buyers is the 14 seconds the new fabric roof takes to open and the 16 seconds it'll need to close again. Aston claims a class-leading stack height of 260mm for the folded roof, and attributes the Volante's 'seamless rear profile' to this neat packaging trick. It also contains eight layers insulation materials so you'd imagine things are fairly civilised in the DBS's default 'GT' mode.

Of course, that'll only be half the story. Aston promises a 'progressively more intense' engine note in 'Sport' and 'Sport Plus' - and a 'rousing flare of revs' on start-up, unless you've remembered to pre-select the 'quiet start' mode. Unfettered access to the V12's soundtrack is a 'critical hallmark' of the Volante experience and its maker suggests that the quad exhaust system has been tuned to deliver a 'pure, harmonic and authentic voice, unmatched by its rivals'. Something to look forward to then.

Aston Martin CEO, Dr Andy Palmer, said of the car: "There is nothing on earth that compares to the roar of an Aston Martin V12 and I believe that the DBS Superleggera Volante provides one of the greatest sensory experiences in the automotive world. This is truly a testament to the no compromise approach of our engineers and designers, to deliver the two key aspects of a convertible Super GT."

Those two aspects? Exceptional performance in an irresistible form. Although anyone with less than a quarter of a million quid spare will just have to keep on resisting because the flagship Volante is priced from £247,500 in the UK - a £22,500 mark up from the coupe, and nearly £90k more than you'd pay for the open-top DB11. Which, coincidentally, is almost exactly what you'll pay for cherished example of the previous DBS convertible. Alternatively, you can wait for deliveries of Aston's new flagship to begin in the summer.