If you missed the Atom 4 at the Festival of Speed, fear not - Ariel has had the video camera out... 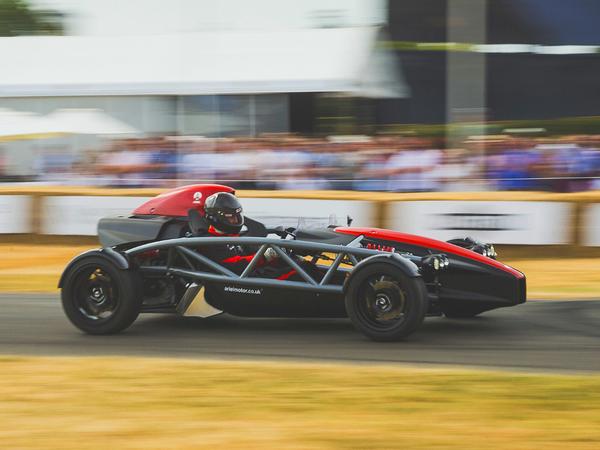 It was another spectacular weekend of 'firsts' at Goodwood. From the commentary box, Prior claimed to have counted 37 debuts of one sort or another. The new Atom 4 easily ranks as one of PH's most anticipated, although there's a good chance you may have missed it on the hill as the car only ran on Thursday. If that's the case, fear not, because earlier in the week Ariel evidently did some filming of its own.

So what does it reveal? Well, mostly that the new car is both very fast and very loud (shock, horror). Much as you couldn't escape the presence of a supercharger in the previous version, it seems unlikely that you'll forget about the turbocharger in the new one. Also as you might expect, removing the best part of a ton from its payload has done the engine's performance no harm - even when short-shifting, the onboard footage shows Somerset being turned to blur at a frenetic rate.

Elsewhere, in place of the old monochrome LCD screen, you can make out that new colour TFT display, which is flanked by an updated switchgear arrangement that we already much prefer - and apparently we're not the only ones. Early word from the Festival suggests that Ariel was having an extremely productive weekend, so if you were harbouring any intention of getting on the waiting list for next year, we suggest you don't hang about...

Ariel will launch its fourth-generation Atom at the Goodwood Festival of Speed this weekend. The Atom 4, new from the ground-up, is immediately recognisable as an Atom but carries over only three parts - the brake and clutch pedals and the fuel filler cap - from the previous generation model.

At the heart of the Atom 4, and one of the main reasons for the complete redesign, is Honda's latest 2.0-litre turbocharged four-cylinder engine, from the current Civic Type R. At 320hp in Ariel's standard tune, it makes 10 bhp more than the supercharged version of the Atom 3, which is enough, Ariel says, to take the Atom 4 to 60mph from rest in 2.8secs, and to 100mph in 6.8sec.

The engine, mounted behind the occupants, as ever drives the rear wheels through a six-speed manual gearbox and limited-slip differential. Ariel says the top speed is now 162mph, permitted by better aerodynamics than any previous Atom: although it is still not exactly the world's slipperiest vehicle, for which you can blame the exposed mechanicals.

Among these is a chassis redesigned with larger diameter tubing, giving a 15 per cent increase in torsional rigidity, while the rear roll hoop - perhaps the easiest way to spot an Atom 4 from its predecessors - is now hidden beneath the bodywork for the air intake.

Ariel says there's more room inside the car; the upright, transparent wind deflector now reaches right across the cabin; while there is a new instrument panel, with TFT colour screen, and switches for the adjustable traction and launch-control functions, all behind a 310mm suede-rimmed steering wheel. As significant will be that the seats can be adjusted independently of each other, while the fuel tank is bigger, too; at 40 litres it's said to be good for a range of more than 300 miles.

Suspension is by double wishbones, with inboard Eibach dual-rate springs and Bilstein dampers. Revised geometry is claimed to vastly reduce squat and dive, while wheels are up an inch in diameter all-round - to 7J x 16in at the front and 9J x 17in at the rear, with 195/50 R16 and 255/40 R17 Avon ZZR tyres as standard.

Brakes are 278mm front and 253mm rear discs, with a 290mm 4-piston AP set up optional. There are optional composite wheels, too, which save 16kg. The steering stays at two turns between locks, but the new rack has been designed to improve the turning circle, one of the drawbacks of former Atoms. That said, the Atom 4 remains a wide car, at 1880mm, almost the same as the Jeep Wrangler as tested by PH the other day.

Priced from £39,975 in the UK, with deliveries beginning early next year, the Atom will be assembled in quantities of around 100 a year at Ariel's Crewkerne, Somerset base. As the first Atom to get full European Series Type Approval (ESSTA) and Australian Design Rules (ADR), the Atom 4 can be sold throughout Europe and Australasia, while it will also be built under licence by Ariel North America, based in Virginia, for both north and south American markets.