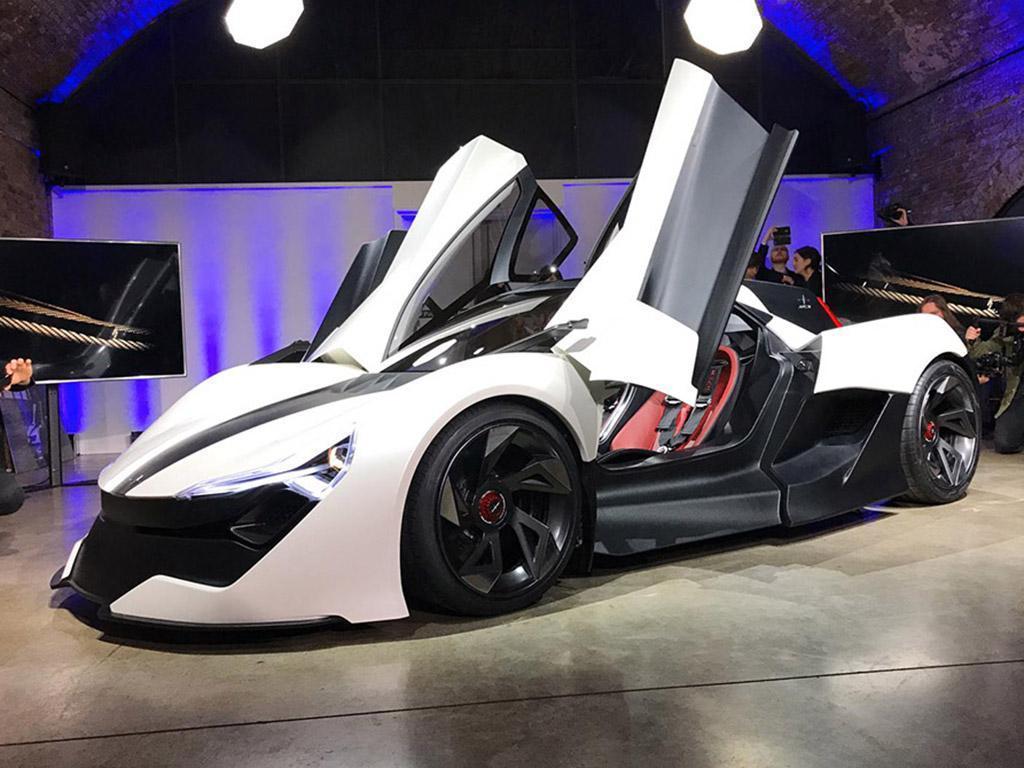 Getting the track day crowd excited about electric power is tough. But that's the target Apex has set itself. The British-designed and built Apex AP-0 mixes motorsport suspension philosophy with a Lotus-like focus on minimalism and a powertrain worthy of a supercar. The 649hp model is all about raw driving thrills and has been created by a team of genuine driving enthusiasts, hence the ultra-low ride height and sleek design, legs up seating position and 2.3-second 0-62mph time. It's simple, but exotic. And better still, it's actually coming, with orders being taken from today.

The further you delve into its specification, the more promising it sounds. Apex - the now two-year-old firm that first produced the open-roof AP1 and is a tech partner of Elemental - says the rear-wheel drive car will cost £180,000, meaning it's far from cheap. Then again, no carbon-fibre-tubbed, 541hp-per-tonne machine ever has been. It's obviously more racer than traditional EV, as wrapped around the AP-0's core is a modular spaceframe with a centre spine, covered with carbon body panels that have been crafted to direct air around the car and through its rear diffuser. The skin generates ground effect aero all the way up to a 190mph top speed, with Brit design director, Guy Colborne, telling PH at the car's Shoreditch reveal that "it's been designed with production readiness in mind". It's a realistic concept, so much so that the car even moves under its own power - albeit slowly.

The chassis itself employs single seater-aping pushrod suspension with adaptive damping that is visible through the bodywork - it's technical setup worth bragging about. Combine that with a 95mm ground clearance, floor-mounted 90kW batteries and 428lb ft of immediately-available torque and it all points to serious athleticism. The carbon-fibre driver's seat places you 180mm from the tarmac with your feet elevated beyond the small steering wheel - and PH can confirm after sitting in it that it does indeed feel very racey; almost prototype-esque. You peer through the windscreen through swelled wheel arches that makes it all feel a bit LMP-esque. And this is an electric car that weighs a featherweight (for EVs) 1,200kg - almost half of which is attributed to the batteries.

That hatchback-like weight is all the more impressive when you consider that this is a car not far off the size of a McLaren 720S. The AP-0 has a 2,650mm wheelbase and 1,935mm tracks, within a body that stretches 4,380mm and is 2,017mm wide. It's a little taller than its twin-turbo V8-powered compatriot, but is more than 200kg lighter. That's hugely significant, given Woking's obsession with using carbon to save weight. In this case at least, the EV needn't be the heavy one, which is probably a more important victory than any other for an all-new super-EV. That being said, company director Gary Leung assures us that the AP-0 is not here to make headlines with big numbers, but to genuinely engage as a car for core enthusiasts like him, a self-confessed petrol head.

Apex says its two-seater can eke out 320 miles per charge, with up to 80 per cent of that battery range achievable in just 15 minutes when a CCS charger is connected - enough for quick top ups during a track day, the team behind it says. Plug the car into a more conventional Type 2 connector and it's an overnight job, taking eight hours to get charge from empty, which for most people will be acceptable. And really it's rather impressive for a relatively compact lithium-ion battery pack setup used in a vehicle with such enormous performance, which is emphasised by the fitment of carbon ceramic brakes and centre-lock wheels, a feature designer Colborne is a shameless link to one of his favourite cars, the 911 GT3 RS.

The AP-0 isn't all racer, though, because it also comes fully kitted with a suite of driver assist features designed to make the car both easier to drive and also safer. A combination of sensors, including a centrally mounted LiDAR, generate a 3D map of the car's surroundings, including everything from objects 100 metres away to details measuring just a few centimetres across. Further 'assistance' is provided by an augmented reality display in the clutter-free cabin, which can also help on track days with racing lines and driving help, as per the growing demands of 2020 supercar buyers. Indeed, Apex wants race tracks to become an increasing part of its company's DNA, with the firm set to build and operate a race track in Hong Kong - where the company's owners are based - before it creates a motorsport academy to train drivers.

Clearly, the brand isn't lacking ambition - and this is one steered by people like us, rather than another tech firm fancying its chances at making a supercar. Actually, we should say cars, because Leung confessed of his and brother Jason's desire to create a following, more affordable sports EV, with a full line-up of models being the long-term dream. First, however, AP-0s are set to be produced from quarter four of 2022, so it's still some way off despite the deposit-taking. But as far as EVs go, the early indication are that it will be worth the wait. Caterham, Ariel, Westfield, Lotus, BAC, Ginetta, Radical, Lister - consider the gauntlet thrown down.

Radford to unveil 'Project 62' next month