But there are still some left if you really, really want one!

"Without the Cygnet... there won't be any Aston V8s or V12s in future either". So said Marek Reichman, Astons design director, back in 2011 when

about the Toyota iQ-derived city car. 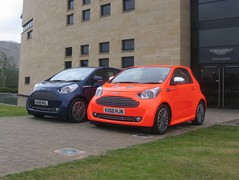 The UK Cygnet owners club out in force...

The justification for creating the Cygnet, as if you needed reminding, was to reduce Aston's average CO2 emissions. But the Cygnet is so vastly outnumbered by the V8 and V12 models that its impact is minor; with the 116g/km city car in the range, Aston's CO2 average is 294g/km. Take it out and that figure rises to 306g/km. Neither figure will be keeping Fiat up at night, and the

And today the news surfaces that the Cygnet has been discontinued. We know, a sad moment for the automotive world. The official word from Aston was, err, please leave a message actually. We tried five different press office contacts without answer so clearly the day has been allotted for mourning.

With a minimal influence on emissions, could it actually be that the Cygnet just wasn't that popular? Did potential customers turn their noses up at a car with such mainstream roots, regardless of how far Aston boosted the luxury? Howmanylet.co.uk only has 143 registered for 2013; for some context, it has 209 Virages recorded as on the road. 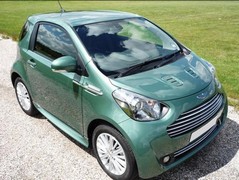 have a project planned? There's already been talk of hybridised powertrains, so could a range-wide approach be underway to further reduce emissions? Making every model more efficient has to be a more sustainable approach to lower CO2.

Should you be after a Cygnet, there are an unknown number left at Aston dealers. The list price, probably the most Aston aspect of the Cygnet, is £30,995. For 'bargain' hunting badge snobs who can't face life behind a Toyota badge used prices start at £20K.