Just when you thought it couldn't be any more controversial, the Bentayga is now being offered as a diesel

Here's some cheering news for you: Bentley can't build enough

. All £162K-and-quite-a-bit of them. It planned to build 3,600 this year but, to the end of August, had already built 3,300. By year end, the plan is to kick a few more Continental GTs off the production list and take this up to 5,500, "maybe even a few more" says product director Peter Guest. As we umm and aah over the merits, or otherwise, of Bentley's first SUV, actual customers get on with the task of fighting their way to the front of the ever-growing queue. 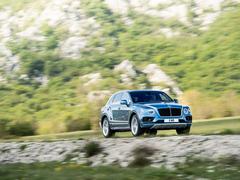 And you thought an Audi SQ7 was bold...

And that's for the range-topping W12, remember. Now, Bentley's getting ready to launch the 'volume' diesel variant, with a lower list price (as if that matters), lower emissions, Bentley's best-ever CO2 and better economy (again, as if...).  Priced from £135,800 - £30K less than a W12 - deliveries of the Bentayga Diesel begin in January 2017, and you can bet there are a few ghostly faces within Land Rover at the very thought of its arrival.

But so keen is Bentley for us to understand this is not just a Bentayga with an Audi SQ7 engine dropped in, it invited us up to the home of CEO Wolfgang Durheimer (sadly not present) to explain just what's gone into it. Namely, a 435hp 4.0-litre triple-charged V8 that, with 0-62mph in 4.8 seconds and a restrictor-free top speed of 168mph, immediately grabs bragging rights as the world's fastest diesel SUV.  Oh, and with 664lb ft of torque, matches the W12 for pulling power - only this time, it's delivered flat from 1,000-3,250rpm. 664lb ft, at 1,000rpm. Good god...

... That is exactly the same as the SQ7 this is apparently not the better-bred twin of. Awkward. "It's co-developed with Audi," admits powertrain director Paul Williams, and "the base engine is the same as the SQ7". But, he insists, "we've made this a Bentley engine" through indefatigable recalibration and detail work. Which, when you have two sequential turbos and an electric compressor 'pilot light', is not the work of a moment. Indeed, I suggest just this to him. His pained expression and distant look of recalling buried memories fully confirms this. 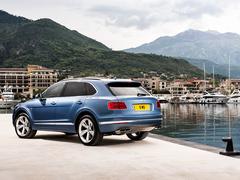 Badges and exhuast mark the Diesel out

The Audi is sporty, he says, whereas the Bentley should be refined. Boot it and, in the first second, courtesy of that electric compressor (which operates up to 2,000rpm), the Bentayga Diesel is faster in response and acceleration than the W12, reveals Williams - but it must be more a surge of power than break your neck explosion. It should also transition ever-seamlessly between the first active sequential turbo (up to 2,700rpm) and the second passive one (3,000rpm and over), and back again. "It's a very complex boosting system," he says, with a world-weary grin.

You can add in programming Bentley's cylinder deactivation tech too - here, it doesn't deactivate cylinders, but closes off the exhaust valves on the higher-speed passive turbo when it's not needed (both turbos feed all eight cylinders). Yes, it's the same base engine, but it appears that the craftsmanship that's gone into the electronics and management of it is easily equal to anything that goes on in the famed Bentley wood shop. Here's to the PH twin test to find out... 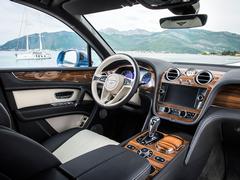 Only the revcounter will give it away in here

To force the point home, Bentley goes deeper into the tech. The electric compressor is fed by the Bentayga 48v technology, the same system that stops this 2.4-tonne behemoth rolling through corners. Supplying a bonkers 7kW of power, it spools from 0-70,000rpm in 250 milliseconds, hence the promise of virtually zero turbo lag. It's mounted low down in the engine bay but the two other turbos are 'hot side inside'... and Bentley's also added some of the emissions filters in there, so they warm up fast and help it ace the upcoming real world emissions tests with ease. "Without all this tech, we could not have made a Bentley diesel," insists Guest. The Bentayga Diesel does deliver, he reckons, despite being its first-ever diesel installed in its first-ever SUV, which is about as far from trad Bentley as can be.

"You've got the wave of torque from low revs, you've got an extra 150 miles per tankful... it really gives the authentic Bentley experience." And will appeal to younger customers, to more customers from other brands, to markets that love diesel but in which Bentley has not traditionally done well - Germany, France, Spain and so on. The logic is undeniable. Sorry, Conti GT, you're now niche stuff.

And from the back seat of a test mule on Bentley's factory test route, the Bentayga Diesel seems pretty convincing. Does it rattle? Nope, it just sounds like a throbby, distant V8. Is it quick off the mark? Implausibly so. You'll need a Range Rover Sport SVR to take this diesel on. 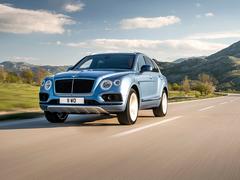 Sure, if you listen carefully from the outside, it might sound a bit more dieselly. Bentley's not fussed about this, so long as it's decidedly anti-diesel within. It seems thus. Besides, a black radiator mesh, V8 Diesel badge and quad tailpipes will give the game away to spotters: it's not a machine that's particularly embarrassed about being a diesel. What it does is deliver the same imperious, step-on driving experience of the W12, in a more accessible package that will theoretically do almost 36mpg and, similarly-theoretically, drive from London to Skye on a tankful, so occupants don't have to eyeball the plebs in a filling station anywhere.

Which you may hate with the very essence of your soul, but is so bang on-target to what today's luxury market demands, the only question now is just how many Bentaygas can Crewe build a year? Oh, and how are they going to fit in all the Speed 6 sports cars and other niche 'proper Bentleys' the Bentayga's success is going to finance? See: told you a Bentayga Diesel was cheering news.