Just when you thought you'd seen all the special editions...

hasn't enjoyed the best reception so far on PistonHeads. Principally that's been due to how it looks, because as a car it's actually - whisper it - really rather good. 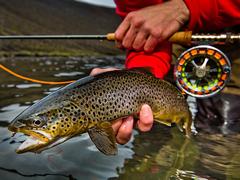 "Well I'd have gone for navy blue outside"

It's also proving very popular with customers, so much so that the first special edition has already been announced. This is the Bentley Bentayga 'Fly Fishing by Mulliner'. Yes, a 4x4 designed specifically to go fly fishing.

Externally and mechanically, this is standard Bentayga. So it's the same Continental-esque looks (that seem to work better in dark green) and W12 powerplant with 608hp. Where it differs is inside, where the Bentayga has been made into the "ultimate luxury car for fly fishing enthusiasts." A narrow niche, granted, but that's the claim...

In the boot you'll find four fishing rods trimmed in saddle leather with linen cross stitching plus a pair of landing nets (in their leather bags) stored in a pocket to the side. The key features of the Mulliner are in three units though, again trimmed in saddle leather. There's a master tackle station (ahem), a refreshment case and a waterproof wade stowage case.

The last of those is fairly self-explanatory, but it's worth discussing the other two. The refreshment case contains three flasks, Mulliner fine china tableware (we kid you not) and a food storage compartment. Naturally it's trimmed in "linen leather". 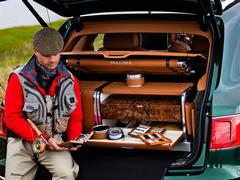 You want lavish? You got it

The master tackle station is where the real fishing fan will get their fix though. In a Burr Walnut veneered drawer is a fly-tying vice and tools, plus a selection of cotton, hooks and feathers. There are also four solid aluminium reel cases. The whole boot area is water proof and dehumidified, with rear sill protection covers also included. Plus, when you're done on the river and have to associate with humans again, everything can be removed and full luggage space restored.

On top of this, the Fly Fishing by Mulliner comes with welcome lights projecting both the Bentley and Mulliner logos on the ground; they are also now available on the standard Bentayga.

A price hasn't been announced for this Mulliner Bentley yet, because why would they need to? We can't wait to see the special editions that are coming next - bring on the polo-spec Bentayga.