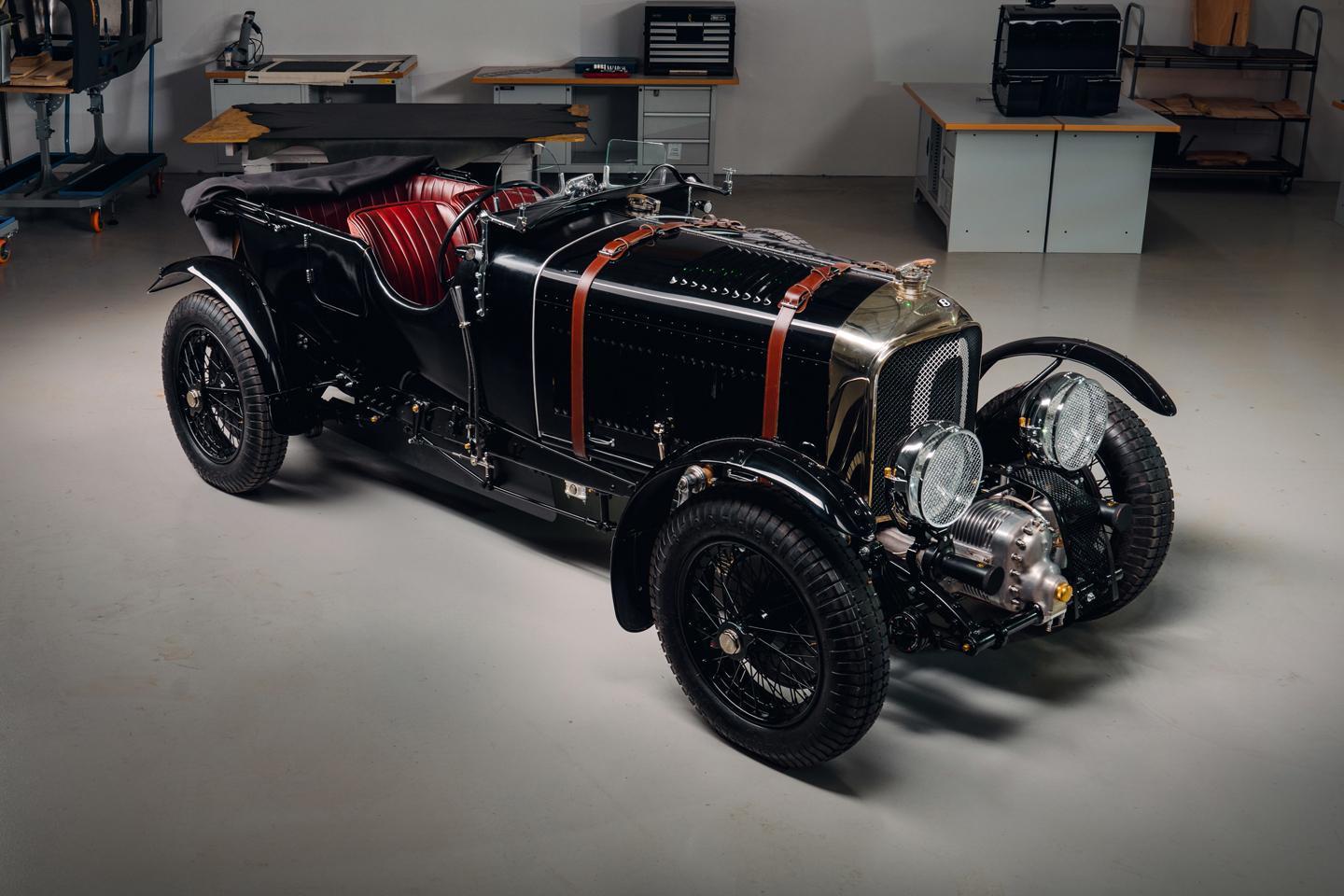 Given the intricacy of the work required to achieve it, you won’t be surprised to hear that it’s taken a team of specialised craftspeople working on Bentley’s rebirthed Blower run almost one and a half years to complete ‘Car Zero’. The hand-built prototype, which is the first Blower to have been made by Bentley Mulliner since production of the original ended in 1930, is here as a prototype. It’ll be used to finalise the vintage setup before a dozen recreations are built for customers. All of which are already spoken for at an undisclosed sum.

Bentley’s reborn Le Mans 24 Hours racer took around 40,000 hours to get from drawing board to the completed machine you see here. There are almost 2,000 individual pieces that go into making a Blower, with the vast majority used in Car Zero said to be as identical as possible to those found in a 1920s Bentley parts bin. Vintage techniques have been merged with cutting-edge design and manufacturing technology, so we can assume that the finish will be at least as good as the cars that were used by Bentley Boys like Sir Henry ‘Tim’ Birkin.

In fact, Bentley’s original Blower chassis, car number two, provided the team at Mulliner with the genuine article to copy. It was laser scanned to ensure near perfect recreation of every part in Car Zero, including the famous 4 ½ litre and its supercharger. Suffice to say it should be as authentic in handling and performance as it is in appearance – although at this stage only Bentley CEO, Adrian Hallmark, will know for sure as he had the honour of driving Car Zero down Pyms Lane – where the original was born - to mark the occasion.

“Today was a truly remarkable day, not just as a milestone in the Blower Continuation Series project but also for Bentley Motors,” he said. “To drive the first new Blower in 90 years was a privilege, and the quality of the car would make Sir Tim Birkin himself proud. The craftsmanship is exquisite, and I’m pleased to report that the car drives just as beautifully as our original Team Car.”

Hallmark added that the use of Pyms Lane for the car’s maiden jaunt was significant because it now forms part of Bentley’s extended main site at Crewe - joining up Bentley’s most famous vintage story with its very latest one. The Blower Continuation Series is also the first ‘customer-facing’ project by the new Bentley Mulliner Classic division, which sits alongside the Mulliner Coachbuilt, where the Bacalar is being developed, and Collections, which is making the Continental GT Mulliner.

It’s been 11 months since the project was announced, but finally the first pieces of Bentley’s re-created 4½–litre Blower are being assembled at Mulliner HQ in Crewe. It’s about the pace of progress we predicted for ‘Car Zero’, the prototype to become Bentley’s first ‘new’ Blower for 90 years, because every nut and bolt is being accurately reproduced as per the 1929 car. It was never going to be a quick process.

This is especially true because Car Zero is the pre-prod 2020 Blower, so it's as much a test bed for accuracy as it is a demonstrator for the 12 customers who’ve secured a build slot for the run. Bentley is adamant that the dozen new 4½–litres must be almost entirely indistinguishable from Sir Henry ‘Tim’ Birkin’s 245hp two-seater, hence the requirement for 3D scanning of every component.

That requires the dismantling of the original, likely the most valuable Bentley in existence, which is a big thing in itself. Bentley admits that a few underlying changes have to be made for safety reasons – although we’ll go out on a wing and say they will absolutely not register on the Euro NCAP requirements list.

Progress began with the fuel tank and radiator mounted to Car Zero’s chassis, with the ash frame for the body also fully fitted. This was followed by the car’s headlights, with the first recreated engine, front axle assembly and the leaf springs also going on. While the latest in scanning tech has been used to ensure size and shape accuracy for each component, rest assured it’s all being put together by hand. Where possible, original blueprints are providing the instruction, so it’s properly authentic.

The run of 12 cars has to be one of the clearest examples of old meets new ever seen in the automotive industry. The Blower is easily a couple of decades older than the recreation stuff produced by the likes of Jaguar and Aston Martin, which makes the prospect of the dozen new Bentleys actually being subjected to regular use really rather exciting. That’s certainly among Bentley's objectives, alongside the obvious financial motivations.

Car Zero is on course to be completed in autumn. Fingers crossed, if things start to return to normal, perhaps we’ll even see it sent to events next year. Mulliner boss Tim Hannig certainly seems keen. He said: “It is extremely rewarding to see the first parts coming together to form the first Bentley Blower in over 90 years. The skill of our engineers and technicians in completing hundreds of individual part specifications is equalled only by that of the artisans across the country that have handmade the components that we’re now starting to bolt together. As we go, we’re refining designs and fixing problems, which is exactly what a prototype build is for. We’re all really excited to get this first car finished, and to show it to the world later this year.”

It's comforting to think that time moves a bit slower at Bentley. After all, who would want its craftsmen and women to feel rushed in the business of so much stitching and lacquering? Even in the technological blur of a modern car-building factory - which Crewe unequivocally is - it's nice to imagine the odd oasis where painstaking attention to detail trumps the need to have mind-boggling volume emerge from the production line every day.

It smacks of a romantic, bygone era of manufacturing, of course - and, to the right person, it's as persuasive as the smell of Spitfire cockpit. It is this rich seam of nostalgia which has been mercilessly exploited by Bentley's rivals down the road in Gaydon. Jaguar and Aston Martin, by virtue of their superior back catalogue, have mashed the 'continuation' pedal to the floor and produced the kind of ultra exclusive cars for which Crewe has no answer.

Until now that it. Because in a single swipe of mind-boggling fastidiousness, Bentley has opted to voyage into the unknown and attempt the world's first continuation of a pre-war race car. Following its announcement at the Salon Prive Concours d'Elegance, the firm will summon a dozen all-new examples of Sir Tim Birkin's 1929 supercharged 4 1/2-litre 'Blower' into existence, and then sell them for unimaginable (and unadvertised) sums down the road.

How far down the road? Oh miles. Years. Because not only is the concept itself as evocative as the poop deck on HMS Victory, but the process of actually getting from here to there is going to take the manufacturing equivalent of an ice age. Because the plan is not just to merrily build away, but rather to let Mulliner methodically disassemble Bentley's very own Blower, catalogue and 3D scan every individual part, and then recreate the car using the original moulds and jigs and traditional hand tools.

To slow down the passage of time even more - to roughly the kind of pace at which Seurat used to paint - Mulliner will also endeavour to inspect and sympathetically restore chassis number HB 3403 when it comes back to the job of reassembling it. It's a remarkable undertaking - especially from a carmaker who has previously seemed content to dip a toe in heritage waters rather than upturning the bathtub on its head.

There's more. Each of the Continuation Series examples will get a four-cylinder, 16-valve engine with an aluminium crankcase, cast-iron cylinder liners and a non-detachable cast-iron cylinder head, while the eponymous supercharger will be an exact replica of the Amherst Villiers Mk IV roots-type blower, helping the petrol motor produce 245hp at 4,200rpm. It will be mounted on a pressed steel frame, which features half-elliptic leaf spring suspension and Bentley & Draper dampers. Stopping is courtesy of 40cm Bentley-Perrot mechanical drum brakes. Short of Mulliner's staff wearing replicas of Biggles' sidearm to work, it's hard to imagine things being anymore sensitive to the period.

Inevitably though, there will be some allowances. Bentley concedes that the 'latest manufacturing technology' will intercede at some point (not least in the business of all that 3D scanning) and some unspecified 'hidden changes dictated by modern safety concerns' must also be permitted. Nevertheless, it's clear that the manufacturer is very serious about fulfilling the demand for 'genuine recreations that can be used, enjoyed and loved without risk to the prized originals'.

Or, as Adrian Hallmark, Bentley's CEO, said: "The twelve new Blowers will not only be an homage to our heritage, they will be a celebration of the outstanding skills of our Mulliner craftspeople. This is a new challenge for Bentley, but with the incredible success of the recent restoration of our 1939 one-of-one Corniche, we wanted to go one step further and make something even more special. Twelve lucky customers will be soon be able to own a unique tribute to Bentley's history."