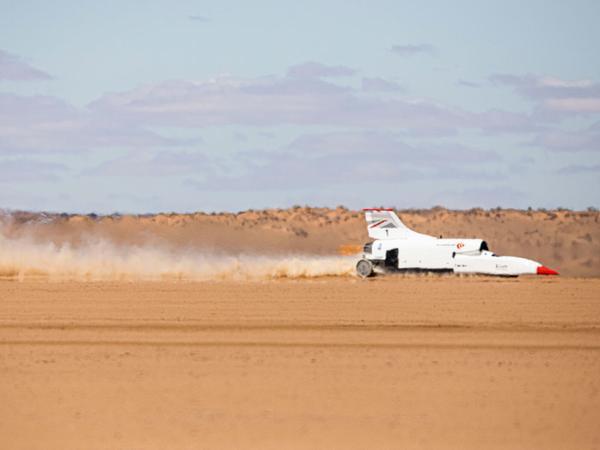 Having overcome its initial teething problems and sailed through a 100mph test run, the Bloodhound LSR test programme has begun to pick up pace. Having set its previous top speed of 200mph during its 2017 trials at Newquay airport, the car took advantage of the rather more expansive surroundings of the Hakskeen Pan to open the taps a little further.

Two initial 100mph and 200mph ‘run profiles’ were completed before the Eurofighter EJ200 jet engine was run on full reheat - that’s afterburner to you and me - propelling the car right up to 334mph in just 12 seconds. That’s quick however you look at it, but is just a third of the eventual 1,000mph top speed that the Bloodhound team is aiming to hit.

That third run marks the start of the true high-speed test schedule and allowed the team to gather crucial wind speed data while conducting all the necessary checks to continue ramping things up. The car’s speed will now be increased in 50mph increments in each subsequent run profile over the next four weeks, with a target in excess of 500mph being the goal.

Speaking of the day’s progress, driver Andy Green said: “We’ve had two very successful runs today, with the second run reaching a max speed of 334mph – going from 50mph to 300mph in 13 seconds. There was strong cross wind gusting at over 15mph and we’ve established that this is pretty much the limit for running in the car. We’re happy because this was a successful test, now we’re ready to progress on to higher speeds.”

A full breakdown of the runs so far is as follows:

Run Profile 1 – a static engine test, followed by a very slow speed (max 100 mph) check of the steering and brakes.

Run Profile 3 – 350 mph achieved using full reheat, with stability tests before and after peak speed, then a coast-down period after engine shutdown to measure rolling resistance without idle thrust from the jet engine. Parachute data collected.

As ever, things haven't gone exactly to plan in South Africa (earlier videos reveal the not entirely unpredictable problems the team has had with its borrowed Eurofighter jet engine) but the latest 'Day 9' footage provides many reasons to be cheerful.

Most notably, of course, the chocks have come off - and just to see Bloodhound in motion over a desert landscape is heartening when you consider how close it came to the scrap heap this year. This new video shows the car completing 'Run Profile One', which apparently involved a static engine test (the one which it failed previously) and a very slow run to check the steering and brakes.

This being LSR, the 'very slow speed' means zipping it straight up to 100mph. Cue some stirring music and the dulcet tones of Andy Green, who reported himself as pleased as punch afterwards. "The car was ready, everything was really slick; it was like (the team) had been doing it for months and months despite the fact that this was our first ever run. Everything worked really well and once we'd got the car rolling, the steering, brakes, engine worked fantastically - this feels like a race car ready to go faster. Next few days we're going to be ramping the speed up quite quickly; the car is ready to go."

It's safe to say that Bloodhound's journey to the Hakskeenpan desert has been considerably longer than the 12 or so hours it must've taken to fly the land speed record challenger to the Northern Cape. The car has suffered so many false starts and near-miss perils that we wondered if we'd ever see it blasting across a billiard table-smooth piece of Mother Nature. And yet here it is, wearing its precision-machined solid aluminium wheels for the first time, and ready to roll.

Of course, as we've previously discussed, Bloodhound's arrival in South Africa does not signal an immediate record attempt, but rather an additional stage in the car's painstaking preparation. Somewhat ironically, one of the key objectives of the LSR's test programme is to study how it behaves when slowing down. The team says it needs to understand better the 'drag and stopping ability' of the jet-powered machine before it can safely run beyond 500mph.

Consequently, the car will be examined under a number of scenarios and at different speeds using the full variety of wheel brakes, drag parachutes and giant airbrakes to see how reality matches up to the existing computational fluid dynamic models. Only when the team is happy with the outcome will it let Andy Green build to higher speeds at 50mph increments.

Mark Chapman, Bloodhound LSR Engineering Director, said: "Newquay was all about getting up to speed and finding out how quickly we could get the engine to full power and accelerate using max reheat. Andy was on the throttle for two seconds to reach 200 mph in eight seconds. Here at the Hakskeenpan on a 10-mile track we can accelerate for much longer, achieve higher speeds and investigate the car's stability, performance and drag, all crucial as we move towards setting a new world land speed record."

It was no mean feat creating that 10-mile track either. Mother Nature provided the flat surface, but the team needed the help of the Northern Cape Provincial Government and members of the local Mier community to clear 16,500 tonnes of rock from 22 million square metres of dry lakebed to ensure that Bloodhound could run unimpeded. For the record, the LSR team reckon it's the largest area of land ever cleared by hand for a motorsport event.

If that weren't impressive enough, the desert has been littered with remote, micro-climate weather stations which record wind speed, gust speed, wind direction, temperature, humidity and barometric pressure, and transmit the data back to the Bloodhound engineers via a low power, long range radio network. The team describe this as some of the most cutting edge technology employed in the project - and with good reason, as a spokesperson for Digital Catapult, the company responsible, explained.

"The car is aiming to go faster than any other land-based machine built thus far. At the speeds hoped for, unexpected cross wind could significantly affect the stability and direction of the vehicle and are therefore a key decision point on when to run the car. We will be measuring and storing accurate data at 1 km points along the track and therefore this info can be used by the team to plan the run."