Getting the band back together is a common ruse for ageing rock stars, but Bridgestone has applied the same thinking to an elderly supercar. And the tyre firm has teamed up with renowned Jaguar XJ220 specialist Don Law to develop a new tyre for the British machine. 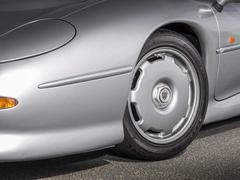 As well as Law, the team creating the new rubber for the

includes the original chief development engineer, test driver and chassis #004 that acted as the pre-production mule. The aim is to offer owners a direct replacement tyre for the ones fitted at the factory but with modern technology incorporated.

The supply of OE rubber for the 217mph XJ220 ran out several years age, but the Bridgestone team plan to have the new ones ready and on sale in time for the Jaguar's 25th anniversary in 2017. "It's very important to keep such iconic vehicles running today and supporting people like Don Law and his team," says Christophe de Valroger, Vice President Consumer OE at Bridgestone Europe. "Technology has moved on significantly in the last 25 years and we believe we'll be able to produce a tyre that will keep a smile on the faces of enthusiast drivers of the XJ220."

As the story goes, the Jaguar supercar was dreamed up by the unofficial 'Saturday Club', a group of workers at the company who spent their own time developing new ideas. It was inspired by racing cars of the 1980s and originally intended to have a V12 engine and four-wheel drive. However, a difficult production process and financial crises meant the car emerged in 1991 two years after first deposits had been placed with rear-drive and a V6 motor. Some customers demanded their deposits back and eventually 208 were built rather than the planned 350.

If nothing else it should inspire the owner of our Reader's Car Of The Week to get out and enjoy his example some more and return to the thread and tell us all about it!

In one of the more bizarre news coincidences we've ever seen, the Bridgestone isn't the only the only new tyre available for the XJ220. At about the same time the last sentence was written on the above story, the press release arrived declaring a new Pirelli P-Zero being launched as well. 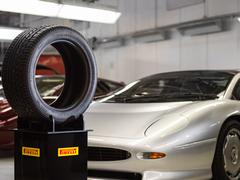 It was the OE tyre for the car on launch in 1992, with the P-Zero having in fact made its debut on the F40 in 1987. This new P-Zero, created specifically for the Jaguar supercar, retains the classic design but incorporates new tech; Pirelli says it "provides more precise control while increasing comfort." So you've no excuse not to drive your XJ220 now!

The new P-Zero will be available from Jaguar Classic in the spring, with new rubber for additional classic Jags set to be announced soon. Just in the time for the 2017 track day season... (MB)