The Lamborghini Marzal, the Jaguar Pirana and some very un-PC narration for your afternoon brew 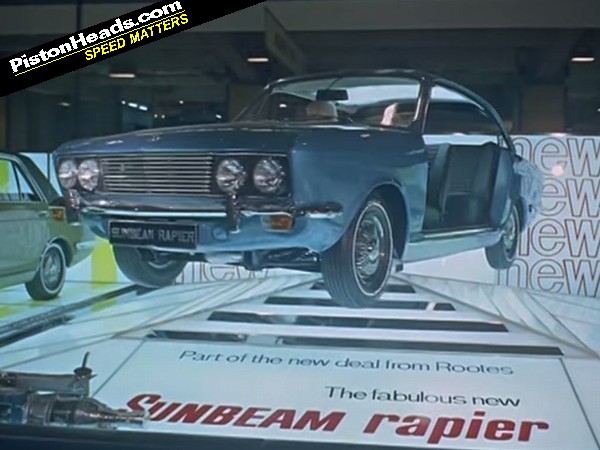 Half a century from now, who knows how silly most of what's on PistonHeads in 2015 will appear. Be that as it may, we won't let that stop us from having a gentle dig at this Pathe film of the 1967 British motor show. 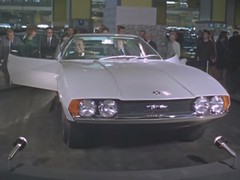 When Bertone and the Telegraph made a Jag

Accompanied by a superb game show soundtrack, the commentary delivered by Bob Danvers-Walker is as hilariously non-PC as it gets. In one short feature he effortlessly insults women's ability to drive and their general ability to muster up enough intelligence to survive. He pigeonholes the British male population as a bunch of overweight booze-sozzled chauvinists. He even finds time to have a cheap pop at the Japanese motor industry. Ah yes, great days.

There were some brilliant cars at Earls Court that year, most notably the Lamborghini Marzal, a six-headlight, silver-seated gullwinged Gandini masterpiece boasting 50 square feet of glass. Bob's script tells him the top speed is 210mph, but given that it's powered by a 2.0-litre straight six, effectively a sawn-in half Miura lump, this is Italian PR fantasy.

The Marzal (period vid here) which of course spawned the production Espada is still around, and it still runs. The current owner bought it at the 2011 Villa d'Este auction for $2.1 million and is not afraid to take it out. It's the nearest thing ever to a cutaway car, so let's hope he has good taste in trousers. 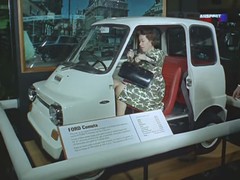 And you thought EV commuters were new

Bertone really was on fire at this time, and the '67 British show unveiled another smashing car from their stable, the Jaguar Bertone Pirana Coupe. This was an extraordinary collaboration between the styling house and - believe it or not - the British motoring press, corralled into a semi-cohesive lump by the Telegraph Magazine's motoring editor John Anstey. At the Geneva show earlier in the year Anstey had asked the scribblers to come up with their ideal car. Working with the Magazine's Art Editor he refined their rough thoughts and passed them on to Bertone. In a matter of weeks the car was built, the Italians being assisted no doubt by the Marzal experience, the influence of which is clear.

It was a dangerous sounding liaison, but the 4.2-engined result was very advanced, very handsome and apparently very capable. It was 300 pounds heavier than an E-Type, but that didn't matter: the Pirana was designed as a high-speed 2+2 Continental tourer, and according to those lucky enough to drive it, it fulfilled the role brilliantly. 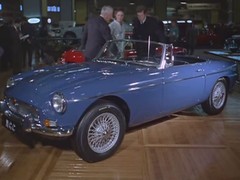 The Telegraph paid Bertone £20,000 for the car to be made, and subsequently sold it for less than £10,000. It spent many years in the wilderness, attracting very little interest in the private market before it was bought in the early part of this decade for $350,000 by Ed Superfon, boss of VIP Toy Store and a man with a passion for 'unknown' cars. He's restored the Pirana to as near '67 show spec as possible, and by all accounts it still drives tightly in the Californian canyons.

In amongst the shiny selection of British metal, all of it sporting strangely immaculate shutlines, you'll find one of the first electric city cars - Ford's Comuta. Back in 1967, Ford boss predicted EV reality in "five to 10 years time". Hmm, well, a bit off the mark there, but who cares? As Bob says, "with only two pedals, it couldn't be easier for the wife!".

This contemporary vid shows BMC's determination not to be left behind. Its announcement of an EV of its own within two years is illustrated by a rare display of wrongness from design genius Alec Issigonis, seen penning some sort of awful Reliant three wheeler thing. Thank goodness that one never came to pass.