Caterham’s joining the fight for

taking to Lord March’s driveway. Well, we say new. It’s a Seven with more power and a bigger pricetag. The polar opposite, then, of the sub-£20K

back to basics car 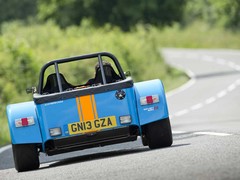 No matter, that’ll be with us later in the year but for now Caterham is going the other way. And, perhaps unexpectedly, giving us a roadgoing version of the

, badged 620R, in keeping with a new naming convention kicked off with the Euro homologated,

This badge is also a subtle nod that this is a slightly different car from the manic, high-revving and stark raving bonkers R500 Superlight that previously topped the performance charts in the Caterham range. The 620R’s 310hp equates to around 564hp per tonne, a significant increase over the 500’s 263hp and 520hp per tonne. And the supercharger brings 219lb ft of torque into play at 7,350rpm where the 500 was all out at 177lb ft.

But it’s less about the package and how it’s delivered. Stretching the analogy, if the R500 is a gum-chewing express courier arriving in a cloud of tyre smoke and throwing the parcel at your feet (or maybe on them) without stopping for a signature the supercharged Caterham delivers a bigger package but with a little more care and panache. In a smarter van with one of those fancy electronic signature things.

PH had an early taste of a test mule last year

Anyway, tortuous metaphors aside that’s because the supercharger makes the power delivery, immense as it is, a little more progressive and manageable than the all or nothing, 8,500rpm, lit firework R500. Relatively speaking of course, going by Caterham boss Graham MacDonald’s statement in the press release.

“While I wouldn’t necessarily recommend this car for those inexperienced in driving Caterhams,” he says, “we always ensure that even our fastest cars retain the manageable delivery of power that makes them accessible, despite the daunting statistics. We know there is demand for cars that re-write the rules of performance and, if you’re brave enough to take it on, the 620R will be an enormously rewarding, fun car to pilot.”

If our experience of the R600 in the winter gloom at Blyton was anything to go by he’s absolutely right and, moderated power delivery or not, 310hp in a 550kg Caterham is going to be suitably exciting whatever the weather. Completing the spec Caterham has confirmed a DeDion rear axle, wide track front axle, ‘high performance dampers’ and Avon ZZR tyres on 13-inch OZ wheels. 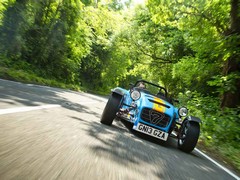 Like the R600 race car it gets additional ventilation on the nose to feed air to the intercooler and improve cooling plus, going by the pictures, some significant camber on the front wheels. Lashings of carbon, seats included, liven up the interior along with fancy (relatively) new switchgear and a sequential gear selector for the Sadev gearbox as used by the R600, a change from the Quaife unit used by the R500.

And so to another impressive statistic in the 620R’s portfolio – the £49,995 price tag. The launch edition is what Caterham calls the ‘sportier’ R, with a “slightly less hardcore” S version with “more accessibility” to follow later. Either way, that’s £5K more than even a CSR and shades even the £42K asked for the R500. Clearly though the 620R is the Seven for those not scared by big numbers, be they on the spec sheet or pricelist.