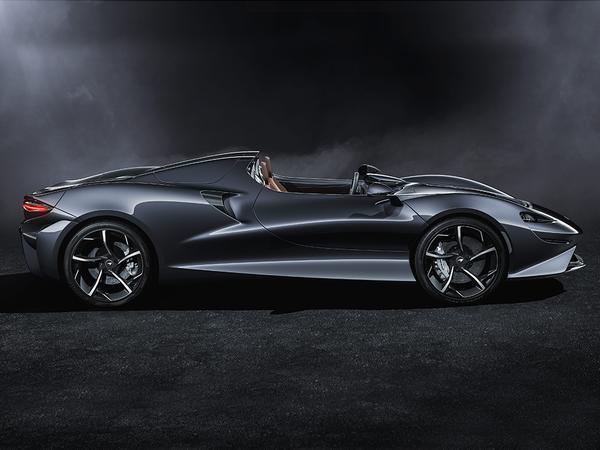 McLaren has apparently had some trouble boiling down the essence of its latest Ultimate Series model. "Extreme new roadster designed for Ultimate driving enjoyment celebrates McLaren's relentless pioneering spirit," it says in bold at the top of the press release. Not a sentence likely to slip off anyone's tongue - and certainly not as memorable as being told that a Senna will be the fastest McLaren around a circuit (period) or that a Speedtail will be the quickest outright McLaren ever (period).

In contrast, the Elva (more on that name in a moment) is a more multi-faceted approach to what McLaren wants an Ultimate Series car to be. For a start, as we were told previously, it will have no roof. Whatsoever. In fact it will not have much of anything - windscreen and windows included - which means that no-one can claim (as they might have done previously) that the firm has not done everything in its power to put 'immersive and enthralling' right at the top of the list when it comes to the driving experience.

Secondly, it is (with a disclaimer of final certification pending) the lightest car ever from McLaren - and from a firm which has recently championed the subtraction of mass as a crucial battleground, that distinction is significant. No less significant is the output claimed for its 4.0-litre twin-turbocharged V8; 815hp is perhaps only modestly more than the 800hp you get from a Senna - but definitively it is more. And that means that the Elva is going to be hugely, hugely fast. McLaren says that it will accelerate to 62mph in less than three seconds and get from 0 to 124mph in just 6.7 seconds. For reference, a Bugatti Veyron Super Sport, a car with 1200hp and all the aerodynamic advantages of a roof, also takes 6.7 seconds.

Thirdly, there is that name, (appropriately from the French 'elle va' - she goes) which McLaren had to reach so far back for that it was necessary to acquire the rights to use it. And that's because the 'Elva' in 'McLaren-Elva' references a company - Elva Engineering, once an outsourced manufacturer of the sixties-era M1A - and not, first and foremost, a car. Still, the fact that there was a car, a 551kg open-top spaceframe sportscar powered by a Oldsmobile V8 and available to customers, is sufficient for Woking to namecheck it - thereby referencing six decades of 'pioneering spirit'.

So there are several conceptual balls to keep in the air; not to mention the additional ones marked 'price' and 'availability'. The Elva will retail at £1,425,000 in the UK, including VAT, and be limited to 399 examples globally. For those keeping track, that makes it cheaper and more numerous than the Speedtail, but also considerably more expensive than the Senna. For almost twice the price, it pays to have some heritage on tap. And it also pays to look like the Elva.

Granted, we haven't seen the car in the flesh yet so we can't vouch for the arrangement of that dramatic front clamshell nor the swoop of the window-less cockpit. But it's probably fair to say that the Elva is more striking than either the Senna or Speedtail, which are both slaves to their various functions. Naturally the roadster has some considerable duties of its own to fulfil when it comes to directing air flow - yet clearly this is a McLaren to be seen in. Shrinking violets apply at their peril.

Those partial to top hats or beehives might also need look away. As it promised, the Active Air Management System (AAMS) is claimed as a world-first. It comprises, among other things, a large central inlet situated above the splitter, a front clamshell outlet vent and a discreet carbon fibre deflector that raises and lowers vertically; the aim obviously being to conjure a bubble of relative calm around the Elva's occupants. This being McLaren, we're expecting remarkable things to result - but even the manufacturer concedes that helmets can be worn 'if preferred' and that a fixed windscreen option will appear on the option list for most markets.

Predictably, many of the cleverer elements of aerodynamic package will toil away out of sight; the car's outward design though, takes no prisoners. "Formula 1-inspired shrink-wrapped volumes create a technical sculpture that is as striking as it is remarkable, the exterior flowing into the interior in a stunning example of a new and unique McLaren 'blurred boundaries' design principle that has allowed us to seamlessly bring the outside in, to further enhance driver engagement while remaining true to our philosophy of making no compromises," said McLaren's Design Director, Rob Melville.

No kidding. Plainly inspired by the boldness of the Ferrari Monza SP1 and SP2 styling, Woking has unashamedly run with the ball. The demarcation between 'cabin' and 'body' are practically non-existent, and while the latter does eventually wraparound the former, the team make no bones about exposure to the elements. The Elva buyer is meant to feel secure while 'inside' the car, but the experience is certainly intended to be on the 'elemental' end of the register.

Not that it's stripped-out, of course. McLaren has evidently paid much attention to what's happening from the neck down. The bespoke elements are numerous: the carbon fibre seats are new (and marginally shorter so you can stand up in the footwell should you wish); the Active Dynamics functions have migrated to the instrument cluster for the first time; the 8-inch edgeless-glass touchscreen is totally fresh and allows its user to swipe through multiple applications that run simultaneously; and there's stowage space behind the rear tonneau - enough to accommodate helmets. There's also no audio system as standard - but expect most people to option that back in at no cost.

Also among the things you can tick but not pay extra for are 5-Spoke Super-Lightweight forged alloy wheels in lieu of the 10-Spoke Ultra-lightweight wheels fitted as standard, and track-focused Pirelli P Zero Corsas rather than Pirelli P Zero tyres. There's a vehicle lift system, too, if you can bear the weight penalty, not to mention a whole host of personalisation possibilities courtesy of MSO - including, inevitably, a 24ct gold engine heat shield.

Structurally, the Elva sings from McLaren's established hymn sheet. Underneath there's a carbon fibre monocoque built around the familiar tub, and the body is made entirely from composite, too. Predominately enormous, single-piece bits of composite. The entire nose is uninterrupted by gaps and the side panels are over three metres long. The car shares its carbon ceramic brakes with the Senna, but has gained titanium calliper pistons so that it might save a precious 1kg from the total mass.

The V8, with its flat-plane crankshaft, dry-sump lubrication and seven-speed seamless-shift transmission also migrates from the Elva's Ultimate Series sibling; McLaren says the increased power output is earned via an 'optimised' titanium and Inconel exhaust system, which has reduced both back pressure and charge air temperatures. The soundtrack is said to be 'clean, crisp and unmistakably powerful'. We've come to expect as much from the chassis set-up, which consists of McLaren's fully active, linked hydraulic suspension, albeit with unique settings for the application.

What specifically that means for the driver we keenly wait to find out. Its maker talks of 'maximising agility and feedback' but the Senna was not short of either, and the experience will surely have been differentiated from that track-going monster. McLaren might not have put its rhetorical finger on it just yet, but the Elva's broader potential seems obvious enough: it has all the right ingredients to prove itself by far the most exciting car the company has yet produced. Its 399 buyers will hope for nothing less. They can expect delivery by the end of 2020.

Search for a McLaren here