is too expensive (looking likely) and the

too compromised (most probably), does a PH-worthy and usable city car exist? Well it just might do come 2016, as Gordon Murray's T25 and T27 have been sold 'to an unnamed manufacturer'. 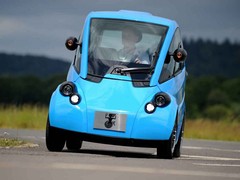 Feel the squeal in the electric T27

Now if there's one man to make the most of a small footprint, it's Gordon Murray. Of course many will look to the McLaren F1 first, but don't forget the LCC Rocket remains the lightest production car ever.

Evidence of Murray's weight fetishism and desire for efficiency are clear in the T25 and T27. Both seat three in a 2.4-metre length with an F1-esque 1+2 layout, but the T25 weighs just 575kg thanks to a tubular steel and composite floor chassis. Both models have all-independent suspension too. There's no gold in the engine bay though...

Speaking of engines, the powertrain choice is split across the two models; the T25 uses the 52hp 660cc turbocharged three-cylinder from the Smart ForTwo, whilst the T27 will feature a 35hp electric powertrain with a 100-mile range. 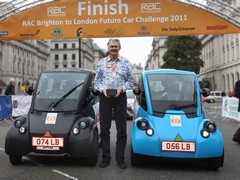 Now this is all well and very good, having Gordon Murray's expertise distilled into a contemporary small car project. But are metropolitan hipsters going to lust after a T25 or T27? The engineering is admirable, but the styling may not tick all the boxes yet. Still, a launch date three years away gives some time to tweak it.

Murray's innovative iStream construction method, a modular production line with great flexibility and efficiency, is likely to have been part of the T25/7 deal. As more details emerge, we'll be sure to update the story.