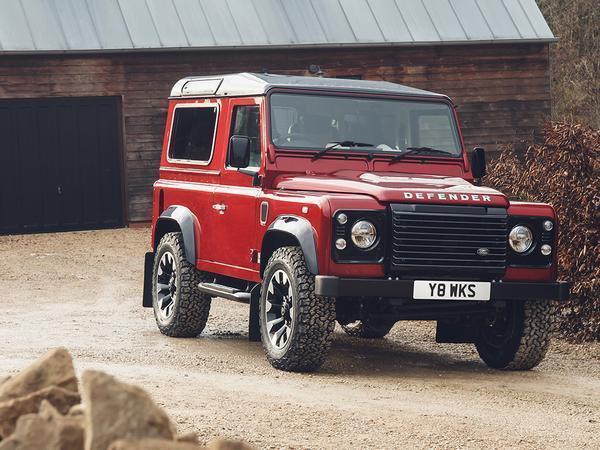 We probably should've seen this coming. Despite the massive fanfare whipped up by Land Rover when it finally ceased production of the Defender in 2016, there was no curtain call for the V8 version - a memorable feature of the model since its Series III days. At the time this seemed like a missed opportunity (given the amount of money people were suddenly prepared to part with). But Gaydon, it turns out, hadn't missed a trick; it simply held back its trump card until it could be passed around with the birthday cake.

So today, as part of its 70th anniversary, we get 150 examples of the Defender Works V8 - a re-engineered homage to the original, Rover-powered concept from 1979. "Re-engineered" is obviously the key phrase here: Land Rover hasn't contravened its own end-of-production rule by building them from scratch post-2016, but instead went to the trouble of reaquiring the cars based on a strict late-model criteria (i.e. registered after 2012, with less than 20k on the clock). Post transformation, they will technically become a Land Rover Classic product - and then be re-registered to reflect the changes made underneath. Gaydon expects the majority to end up on private plates.

The detail of what's occurred beneath the hood is unlikely to dampen buyer interest. The last (official) V8 Defender launch occurred in 1998 when Land Rover installed the 4.0-litre engine from the second generation Range Rover in another limited run of sought-after anniversary cars. These had 193hp (the original Series III Stage One cars had 91hp from the smaller, carburetted 3.5-litre V8). The Works car gets 405hp. And if more than twice as much weren't enough, it's delivered in intriguing format: Land Rover having removed the supercharger from its current 5.0-litre engine to provide us with that rare thing: a naturally-aspirated V8.

We'd venture that this is better suited to the Defender than its extremely spirited forced induction sibling, although it still delivers 380lb ft of torque (at 5,000rpm) - and does it via the same eight-speed ZF transmission that you'll find elsewhere in Land Rover's current lineup. As you can see from the pictures, incorporating the joystick-style gear lever has required a certain lack of sympathy, but the two-speed transfer box remains, as do the heavy-duty differentials front and back. Inevitably the Works car (in 90 wheelbase format) will hit 60mph quicker than any production Defender before it at 5.6 seconds, and top speed has modestly increased to 106mph.

The performance gains have inevitably required some fettling to occur in the chassis department, with Land Rover fitting what it calls a handling kit (comprised of new springs, dampers and anti-roll bars) alongside uprated brakes and 18-inch diamond-turned Sawtooth alloy wheels and all-terrain tyres. Inside, the Works cars get full Windsor Leather trim and the Classic Infotainment system.

The glossy spec is appropriate because the Defender Works V8, in its shorter 90 format (the 110 is available, too, although the split is unconfirmed), will start at £150,000. Expect that to be no barrier whatsoever to the model's customer base - but if it's a little too rich for your blood, Land Rover Classics is about to offer some 'inspired by' aftermarket packages, including power upgrades for the existing diesel engines and the fast-road suspension kit. Further confirmation that Gaydon is not quite done with the Defender just yet.

(Update: original story edited to clarify that Land Rover didn't hold back chassis numbers while the Defender was still being manufacturered.)