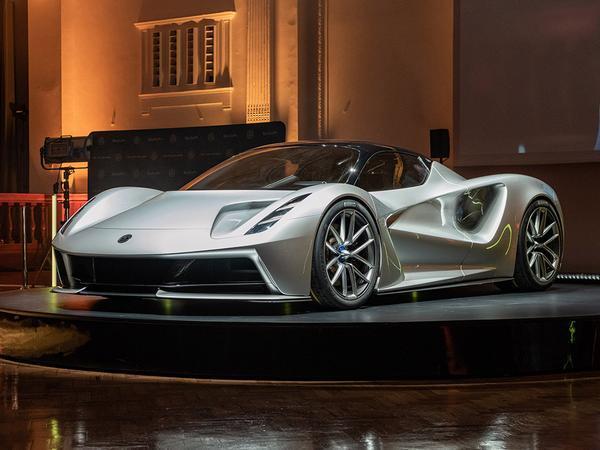 The Evija's raw statistics are impressive enough, but at the official unveiling last night PH discovered that Lotus is already considering some record-setting with its new EV hypercar.

One of the interesting details from the technical presentation was that the 70kW/h battery pack has been designed to deliver its 2MW peak flow for up to seven minutes before it suffers from the de-rating that tends to happen when EVs get hot and bothered. Louis Kerr, Lotus's principal platform engineer, admitted that this was with a lap time target in mind. It didn't take long for us to work out which one.

"Yes, we are thinking of the Nordschlife," Kerr confirmed, "we think we'll be comfortably quicker than the NIO EP9 there."

Although the Volkswagen ID.R recently set an outright electric record around the famous track, the NIO's 6:45 time from 2017 means that it is still nominally the fastest 'production' EV to have lapped the 'Ring. Lotus has set its sights on breaking it.

While the Evija's battery pack has a relatively modest capacity, considerably less than the 120kW/h of the Pininfarina Battista which is its main rival, it is designed to be used hard. Kerr says that the active cooling of the Samsung lithium-ion cells is why it can support ultra-fast charging, up to 800kW - more than any commercially available charger out there. The battery pack is also swappable, although this takes a couple of hours, with Lotus considering ways to ultimately let buyers upgrade to newer and more powerful packs as technology improves.

The other big surprise from the presentation was Lotus's confirmation that it will built up to 130 of the Evija; when we first learned about the car the steer from Hethel was that production volumes would be much lower. When we asked Lotus CEO Phil Popham why, his reply was refreshingly simple: "if something's worth doing, it's worth doing properly, isn't it?"

That figure is a limit rather than a target, but Popham confirmed that several contracts with potential buyers have already been signed.