David Brown Automotive, the coachbuilder responsible for the £600,000

, has now launched its take on the classic Mini - Mini Remastered. The unveiling of the "classic British icon, remastered for the 21st century", took place in Shoreditch - natch - which gives an indication of the customer base this new car is aimed at. 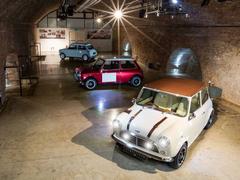 Price is the obvious question. While David Brown insisted they're still debating the precise cost of the car ahead of its public launch at the end of the month in Monaco, he did say it would be "considerably south of six figures", which is a stark departure from the half-a-million pricing of the Speedback. The company reckons that, when running at full capacity, the new Silverstone-based factory will produce between 100 and 200 remastered Minis a year, which again marks a departure from the ultra exclusivity of the Speedback, of which just 11 cars have been built in two years.

While the new version resembles a Mini in overall shape and proportions, the chassis and body panels are all new. The engine is a reconditioned original 1,275cc unit with 79hp and 91lb ft unit and the transmission a reconditioned four-speed. The main design differences are the panels and the lights: the silhouette has been 'de-seamed', with smooth body panels creating softer edges, the rigidity provided by bespoke structural beams and struts.

The headlights vary depending on which version you order; three were on display in Shoreditch comprising the 'standard' car, with classic lights and a clean, retro interior, the Cafe Racer version, with a white and tan leather interior and fake but beautifully made and engraved leather bonnet straps, and a Monte Carlo version, with the LED headlights aping the triple bulbs of the original. 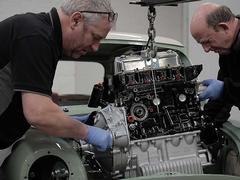 At the rear, a cluster of three LED lights with the same details and bezels as the Speedback mark the car out as a DBA creation; the Mini also has the same grille as the Speedback to create a family face for the coachbuilder. Each car gets DBA enamel badges and puddle lights fitted to each handsome bullet-style wing mirror.

All versions get a Pioneer touchscreen with sat nav, Apple CarPlay, USB connectivity, a push-button start and remote central locking. The interior is as well-appointed and crafted as you would expect, with knurled aluminium finishing for the buttons and stalks. The steering wheel is still in a fixed position though, so there's no allowance for the more portly of new customers.

David Brown said he hoped "it will be driven as a fashion icon, like the original was in the 60s."

You sense that this car, whatever else, is a more sound commercial proposition than the Speedback, and heralds some significant growth for the company. Let's see what's coming next!