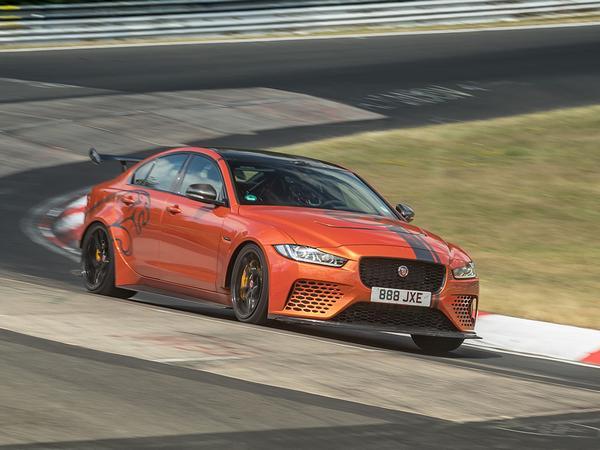 Apparently not content with already holding the production saloon record for the Nordschleife, Jaguar has endeavoured to better the XE SV Project 8's time at Europe's most fearsome proving ground. The manufacturer's hunch that the 600hp model could go even quicker than in 2017 paid off - to the tune of 2.9 seconds, making it fully 7 seconds quicker than the any other four-door production car.

Of course, as before, Jaguar is rather stretching that description to its limits - the XE SV Project 8 being a bespoke and extremely low volume model that costs from £149,995 and (in Track Pack format) does without its rear seats for the obvious weight-saving benefit. Still, with the quickest hot hatches now stripped out and similarly rarefied, it would be unfair to suggest that Special Vehicle Operations is alone in doing all it can to squeeze the last fraction from a lap time.

At any rate, the Project 8 is no longer a prototype - as it was in 2017 - and Jaguar has confirmed that its adjustable twin-spring coil-over suspension was set at its 'track' ride height, with its adjustable front splitter and rear wing positioned for maximum downforce. Again, Michelin Pilot Sport Cup 2 R tyres were deployed (road-legal albeit with competition-grade rubber compound) and it probably wouldn't be unreasonable to assume that Jaguar found some margin in warmer conditions.

Jamal Hameedi, Jaguar Special Vehicle Operations' new Engineering Director said: "The original Nürburgring time set by Jaguar XE SV Project 8 demonstrated the extreme performance envelope of the world's fastest production sedan, but the SV team is driven by a motorsport mentality and we knew Project 8 could go even faster. This new official record time is a fitting reward for everyone who has played a part in pushing the boundaries for our customers with Project 8."

Fair enough - although PH is inclined to think it would have been more interesting to see how the recently announced Touring specification car (with four seats aboard) would have fared on the 12.9-mile circuit, with a modest amount of extra weight and its rather more discreet spoiler. Had the slightly toned down 600hp variant still been better than 5 seconds quicker than the 639hp Mercedes-AMG GT 63 S 4-Door then Jaguar would have had slightly more to crow about.

Still, a record is a record and 7min 18.361sec is certainly not to be sniffed at - it roughly equals the time set by Sport Auto in a 991 GT3 in 2017 (though not Porsche's official time) and is a timely reminder of what SVO is capable of when it sets its mind to it. Very timely, when you consider that Project 8 production is drawing to a close this year and Jaguar still has a few examples left to sell. The press release cheerily suggests contacting your nearest Jaguar Retailer if you're interested. Naturally, we can go one step better than that...