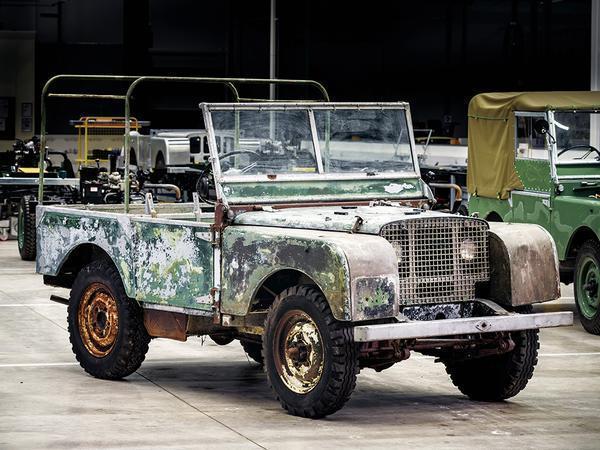 This is just the beginning. Land Rover celebrates its 70th anniversary this year, and Gaydon won't be shy about blowing its money trumpet over the next 12 months. Expect events to reach fever pitch in time (JLR is not above flying its cars over London landmarks or having them driving out of giant rugby balls or over the world's largest ever Lego structure) but for now we start small - and conveniently close to genesis.

Restoring ancient and decrepit examples of the Series I is hardly new, even if Land Rover itself only turned its hand to it recently (having suddenly realised just how much money there was to be made). But Gaydon has delved deep into its archives - and the countryside too, by the sound of it - for this; unearthing not just a very old example, but one of the three pre-production Land Rovers which were first shown at the Amsterdam motor show in 1948. For a Series I, this is Ark of the Covenant stuff.

Naturally, Gaydon had to go all Indiana to find it. The car in question hasn't merely bobbed from owner to owner; it wasn't even registered until 1955, and by then it had been converted from left-hand drive to right. Less than 15 years later, the priceless piece of automotive history was in Wales being deployed as a "static power source" which presumably means it was up on bricks in a farmyard somewhere. It did its duty here for 20 years before the engine finally seized, and it was sold to someone in Birmingham as restoration project. Which, of course, never happened.

And that's where Land Rover found it, languishing in a garden not a million miles from where it was originally built in Solihull. Now it's in the hands of the team behind the Land Rover Series I Reborn programme, where it will now be part of a year-long process to painstakingly return it to its former glory. That's all fine and dandy - although, looking at the pictures, we'll confess to rather liking the old girl as she is now, all noble and unloved.

Tim Hannig, Jaguar Land Rover Classic Director, said: "This Land Rover is an irreplaceable piece of world automotive history and is as historically important as 'Huey', the first pre-production Land Rover. Beginning its sympathetic restoration here at Classic Works, where we can ensure it's put back together precisely as it's meant to be, is a fitting way to start Land Rover's 70th anniversary year."

That precision will involve remaining faithful to many of the special features which were unique to the pre-production models, including thicker aluminium alloy body panels, a galvanised chassis and a removable rear tub. "There is something charming about the fact that exactly 70 years ago this vehicle would have been undergoing its final adjustments before being prepared for the 1948 Amsterdam Motor Show launch - where the world first saw the shape that's now immediately recognised as a Land Rover."