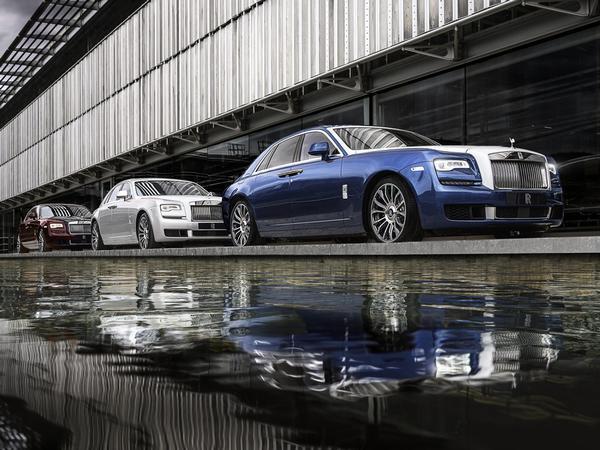 Much like a school leaver's speech or a hurriedly-written cover letter, you know any press release which begins with the dictionary definition of a word is going to be tenuous in its convictions at best. This holds true even for marques as prestigious as Rolls-Royce which, in introducing its new, run-out, limited-edition Ghost, tells us that the Oxford English Dictionary defines Zenith as, "the highest or most successful point of anything." And it's all downhill from there...

The current Ghost is soon to be replaced, having been around for the best part of a decade, and the Zenith - in much the same way as the Phantom Zenith before it - sends it on its way in its most opulent guise yet. Only 50 examples will be produced, each featuring "the highest levels of Bespoke ever seen" in a Ghost and offering "a chance for collectors of luxury to obtain an item that is truly at its apex".

That means luxuries like illuminated door pockets, a marquetry insert made from wood or 'technical fibre', embroidered leather seats, and a centre console engraved with 1/50th of an artwork which depicts the original 200EX concept's blueprint in enlarged, abstract form. All immaculately crafted we're sure, but it's not exactly soul-stirring stuff, is it?

There are a couple of touches more worthy of shouting about, even if neither goes any further towards enhancing the car's physical performance than a glowing door bin. First is the 'commemorative ingot', an engraved plaque cast from the melted-down Spirit of Ecstacy which once adorned that 200EX Geneva show car. It's not every day you can claim to have a piece of a Rolls-Royce concept car, after all.

Second comes the Zenith's take on Rolls-Royce's famous starlight headliner. Seen here in 'Shooting Star' configuration, it consists of over 1,340 individually mapped and hand-woven fibre-optic lights, capable of displaying shooting stars flying at random across the perfectly crafted heavens. It's pointless, it's fantastic, and we want it. To complete the package, the 50 Zenith Collection Ghosts will be available with a special two-tone, gloss-contrast paint finish. Buyers can choose between Iguazu Blue with Andalusian White, Premiere Silver with Arctic White or Bohemian Red with Black Diamond.

So that's it, the last examples of the first generation Ghost. All sarcasm aside, the Ghost has been a highly significant car for the British brand, going further than any of its previous models towards offering an experience as compelling for drivers as it is for passengers. It remains to this day, the most successful Rolls-Royce ever sold, and the company attributes it with attracting a new, younger clientele, one which has helped to reduce the average of its owners to just 43 - presumably from somewhere north of 75...

It seems a bit of a shame, then, not to send it off in greater style. Perhaps with a little more power, a touch more dynamic ability or little less heft; y'know, the things which would actually highlight its unique capabilities. Then again, the dictionary defines frivolous as "carefree and superficial, not having any serious purpose". Expect the arrival of the next generation Rolls-Royce Ghost to carry a little more weight.

Search for a Rolls-Royce here