With the latest QP just launched, the last generation is defintely worth a look. Here's all you need to know

has been with us for more than 50 years now in one shape or another. As the new Quattroporte VI has not long been launched, we thought it about time to have a look at the 2004-2013 Quattroporte V, which is the model that has done the most to put this leftfield Latin luxobarge into the common consciousness. 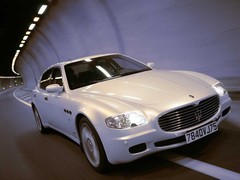 QP V arrived in 2004 and bowed out last year

Maserati launches the QP V in 2004 with a 4.2-litre V8 borrowed from the 4200 Coupe with 400hp, 170mph top speed and a DuoSelect automated manual gearbox with paddles on the steering wheel. This gearbox has gone on to define the early version of the car, but more of that later. At launch, it was good for 0-62mph in 5.2 seconds and 17.9mpg average economy was just about acceptable for the time.

The range was then expanded in late 2005 with the Executive GT and Sport GT models. In Executive trim, the QP made more of a grab for Mercedes S-Class and Jaguar XJ customers with more wood and leather trim and comfort pack for rear seat passengers. Sport GT customers were treated to 20-inch alloy wheels, sports steering wheel and improved software that quickened gearshifts by 35 per cent. There was also a sports exhaust and unique software for the Skyhook suspension that alters the damper rates.

A year later, Maserati relented to pressure over criticism of the DuoSelect gearbox and its jerky automatic mode. A standard six-speed ZF auto was introduced and was sold alongside the DuoSelect, but for all but the most dedicated buyer the ZF 'box became the only sensible choice. 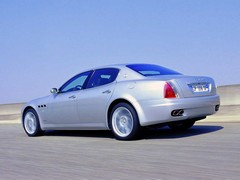 Pre- or post-facelift, it's a stunner

In 2008, the Sport GT S model arrived with lower, firmer suspension and Brembo brakes. It used the ZF auto as standard yet was a more sporting car than earlier QP model thanks to a 4.7-litre V8 with 439hp to provide 0-62mph in 5.4 seconds and 174mph. The 4.2-litre V8 continued to be used in other

A facelift in 2008 did little to change the Quattroporte's appeal, with the car now established as an unusual but diverting choice for luxury car buyers. With prices for early QP Vs now around £15,000 and rising to £70,000 for late GT S versions, there is a Quattroporte to suit most budgets, though running costs are a very different matter and, old or new, a QP V needs deep pockets to remain in top condition.

PHer's view:
"They're wonderful and infuriating in equal measure. Women love them and other blokes are frightened of them. Nothing I have ever driven clears the outside lane as well but also never gets tailgated. Expensive to run but so, so worth it."
Ben McCaulder