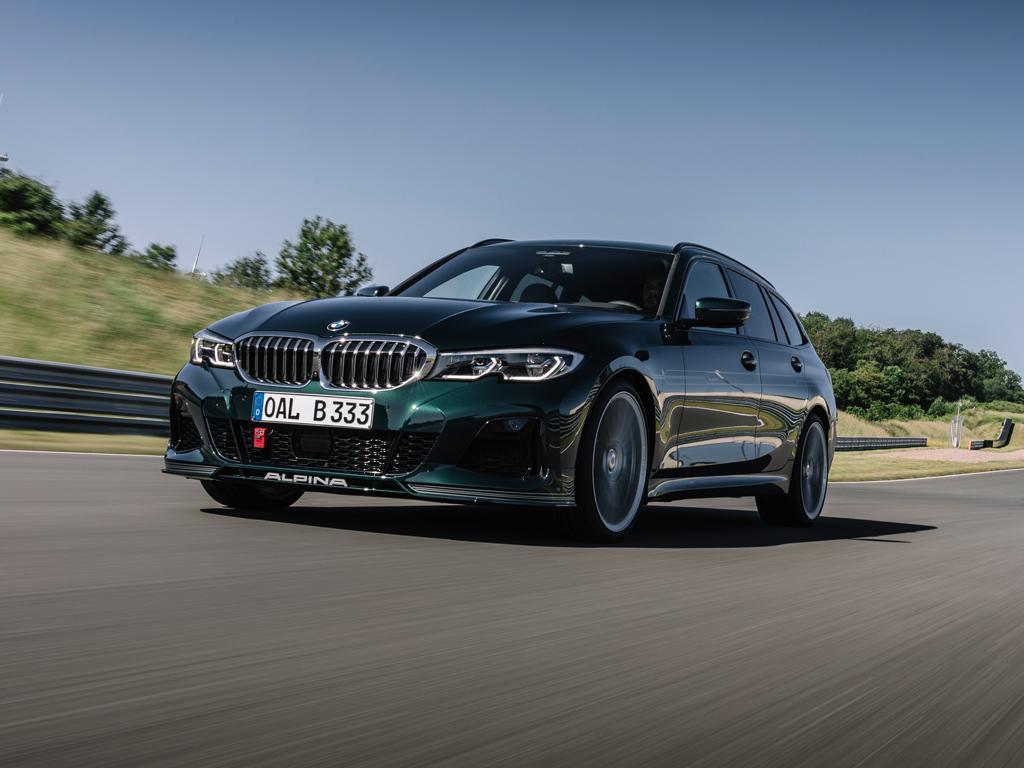 If Alpina didn’t exist, it would be impossible to invent it. The German tuner is an automotive pilot fish, an independent company that works exclusively with the much bigger BMW and gets official sanction to create its own version of the company’s models, despite the existence of an M Division within the fence. That means it gets to see BMW’s model plans years out and – with the new B3 – has actually got to market ahead of the M3. As always, Alpina’s role has been to operate at the margins and create cars that BMW wouldn’t build itself, focused on comfort as well as serious performance – which historically has tended to result in cars particularly well suited to British roads, and British tastes.

We will have to wait a little longer to experience the new B3 in the UK, but after a first drive of both saloon and Touring versions in Germany – on both the ludicrously three-dimensional Bilster Berg track and some of the local roads surrounding it – I can confirm it does feel pretty special.

Alpina remains is a tuner rather than a builder, drawing heavily on BMW’s parts bin. That means its models evolve alongside the base car, with the most obvious mechanical change for the ‘G20’ B3 being the arrival of standard all-wheel drive. That’s a result of the shifting expectations of this part of the market – AWD was a popular option on the last-gen B3 Bi Turbo where offered – but also acknowledgement of the need to find traction for a substantial hike in power and torque.

The new B3 has switched to a retuned version of the ‘S58’ 3.0-litre straight-six, the same engine that powers the new M3, but with different turbos and a tune to emhasise Alpina’s preference for drivability over high-rev fireworks. The peak 455hp slots it deferentially below the new M3, but Alpina is prouder of the B3’s torque output, with 516 lb ft available from just 2,500rpm. As with other senior 3 Series, drive gets dispatched through an eight-speed ZF autobox, but this has been upgraded with the beefier torque converter normally fitted to BMW’s V8 models, and reaches the road through stronger driveshafts.

Other hardware changes include an upgraded cooling system, new springs and retuned adaptive dampers, with a broader spread between Comfort and Sport+ modes and meaty 395mm diameter front brake discs gripped by four-pot calipers – with 345mm diameter rotors on the rear. Buyers will be able to choose between either 19-inch versions of Alpina’s ‘Dynamic’ wheel – with five groups of four spokes – or 20 inchers in the company’s classic narrow spoked pattern, these a £2,080 upgrade in the UK. The familiar ‘70s style pinstriping is still present, but it’s not compulsory and without it – with just the ALPINA front splitter – the B3 is a very subtle spacecraft indeed.

The cabin is as nice as you’d expect from a 3 Series pushing £70,000, but beyond the plushness of the trim there aren’t that many obvious Alpina specific bits beyond the rebranded steering wheel boss and the plate next to the gearshifter giving the car’s specific number. The digital instruments have also been given an Alpina rebranding. It is, of course, possible to pay to make it nicer, or at least more distinctive, with optional Merino and Lavalina leather upgrades and most of the regular BMW options list. One box I would tick would be the £280 one for CNC milled and Alpina branded aluminium gearshift paddles in place of the odd feeling up and down buttons on the back of the steering wheel, which come as standard.

While nice trim is lovely, the core of any Alpina’s appeal has always been about the driving experience, and on road the B3 doesn’t disappoint. The new engine feels appropriately effortless, pulling hard from basement revs without drama and happily extending itself to its redline when called upon to do so. It doesn’t have the explosive top end of the last-gen M3/ M4 – let alone what we can expect from the new one – but the linear responses feel entirely appropriate for an Alpina. Part-throttle acceleration is the deceptive sort where the lack of apparent effort, and the B3’s snug noise insulation, quickly deliverers surprising speedo numbers. Swapping between saloon and estate reveals little discernable difference; there’s slightly more noise from the back of the Touring, but no noticeable change to comfort or responses.

The all-wheel drive system definitely helps with this sense of effortlessness. Even hoofing the B3 out of tight junctions – in the interests of science, you understand – there’s no sense of anything other than total traction. It just hooks up and goes, equally so in the tighter turns where – as with BMW’s brawnier AWD non-M cars – excess speed results in mild understeer rather than any sense of the rear end struggling to deliver grip. Yet the B3 doesn’t feel numb or over-insulated, the steering is nicely weighted and some proper sensation gets through to the fat-rimmed wheel.

Ride is predictably impressive, with the proviso that German road maintenance is to a far higher standard than it is in the UK. Even riding 20s, the Alpina’s combination of supple springs and smart adaptive dampers seemed pretty much uncatchoutable, with the few big bumps offered by the road route defused effortlessly, even with the dampers in their firmest Sport Plus setting. While its base settings are relatively soft, and much more so than with an M car, the B3 retains impressive control over its mass and body motions, and squats much less than brawnier BMWs tend to under hard acceleration.

My biggest concern after driving on road is that the B3 will prove to be too yielding and easy-going to cut in on track, especially a circuit like Bilster Berg. This mini 2.6-mile circuit near Paderborn was designed by Herman Tilke but isn’t used for racing. Rather its an Ascari-style member’s club and sometime venue for corporate events like this one. It is built on the site of what was a British Army Cold War munitions store – most of the former bunkers have been converted to garages – and has both big hills and stomach-loosening crests and compressions.

My experience definitely isn’t max attack. Mindful of the need to preserve the significant percentage of its annual production that has been brought here, Alpina is using a pace car with orders to set a cautious velocity and make sure nobody gets carried away. But there are enough cars on track to allow me to drop back a bit and string a few faster corners together. With space to stretch its legs the B3 still feels impressively quick and it handles Bilster Berg’s rollercoaster undulations without ever feeling wayward. But the extra loadings allowed by the circuit also bring out a playful side and a much more obvious sense of the power and torque reaching the rear wheels, especially with the stability control switched to its more permissive Sport mode.

This is impressively liberal. Once turned into a corner the B3 is more than happy to be powered to the limit of the tyres’ lateral grip, with more than enough torque in hand to push beyond this and into oversteer if you want to. The half-off stability allows some impressively liberal low-speed angles, with torque diverted to the front axle to help keep the car stable and the driver feeling mildly heroic. It stays friendly even with everything switched off, although the sense of the all-wheel drive system trying to straighten the car becomes stronger. It won’t be as fast as an M3, but for smiles rather than speed it could be an equally valid choice.

Not that many people will make it. Alpina has always sold tiny fractions of what BMW manages, especially in the UK. In the days of the four-cylinder D3 the company managed to sell more than 300 cars a year in the UK, but that has since fallen to under a hundred. The arrival of the new B3 alongside the D3 and gargantuan XB7 should improve that a bit, and the B3 wagon offers a level of performance BMW will never offer in a 3 Series Touring, but Alpina will never be commonplace – there will always be a little frisson when you spot one in the wild. Yes, the B3 is a very expensive 3 Series, but it could also be the best one.