The latest X3 gets the 510hp straight-six that's headed for the new BMW M3. Is it enough to redeem it? 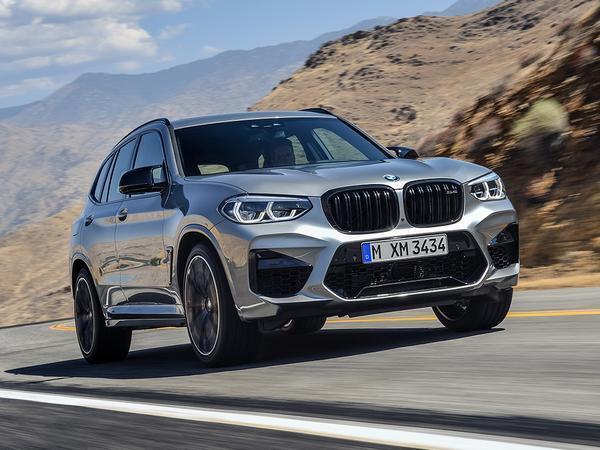 Go ahead: maintain that air of aloofness about the new BMW X3 M Competition if you like. You probably wouldn't normally when BMW launches a brand-new M car - but whatever. These days, some performance cars seem to be a lot more interesting than others, don't they?

Yup - this is another hot SUV [stifled yawns at the ready]. Maybe we need one of those this year like we need another visiting dignitary who smells strongly of Trump, or another one-two for Mercedes-AMG in Formula 1. Or maybe this is the car we've needed since the first of the breed. Unless you keep reading, you'll never know.

What if I was to tell you, for starters, that this particular hot SUV has the brand-new 'S58' BMW Motorport Division straight-six engine headed for the next M3 and M4? What if I mentioned that it comes with the 4WD system from the current M5, and a proper actively locking M rear differential, and steel coil suspension springs like every other proper, pucker M car there has ever been?

What if you found out that this was the sort of hot SUV available in a swoopy mock-coupe bodystyle instead of as a two-box utility car? Could I hold the collective attention of the PH massive for the next few hundred words? Hope so - because, while this may be an M car built in North America and designed to appeal primarily to buyers over on Donald's side of the pond, it's certainly no half-measure judged either in terms of its pace or its surprisingly purposeful performance character. And, quite clearly, it is not fake news: BMW M is making the new X3 M- and X4 M Competition models whether we like them or not.

The X3 M will come to these shores in September - as will its X4 M sister car, which is the aforementioned near-mechanically-identical, allegedly 'better-looking', less useful and more expensive version which, as part of a predictably brilliant advert for the rational intelligence of the average performance SUV buyer, is sure to become the more popular seller of the two. Neither of them seems a particularly appealing design to me - and I'd predict that might be a bigger problem for the X4 M than for the X3, if only I thought anything was predictable about the performance SUV niche.

The aforementioned engine that drives them is an all-new 3.0-litre, twin-turbocharged inline six that's been developed to replace the outgoing 'S55' engine but is unrelated to it, being derived instead from the 'B58' six-pot used in the M Division's various, big-selling 'M40i' derivatives and by the new Toyota Supra. It's got a forged crankshaft and forged pistons, an indirect intercooler, and a lightweight cylinder head made with parts produced by 3D printer (nice, robust, non-wobbly ones, you'd hope). In the 'Competition'-spec versions of both cars (which will be the only ones offered to UK buyers) it makes just over five-hundred horsepower, but the M Division engineers in those matching branded sweatshirts all grin and wink when you suggest that it might already be capable of making plenty more.

The car uses the eight-speed automatic gearbox, torque vectoring four-wheel drive system and active M differential also seen on the current M5, but it doesn't have the super-saloon's rear-wheel drive M xDrive mode, so you get to choose between '4WD' and '4WD Sport' only when setting up its four-wheel drive system. Handily, this being a fully paid up modern M car, you can choose between plenty of other things if you feel like it: between the usual three modes each for the calibration of the variable-ratio servotronic steering, adaptive dampers, engine, transmission and dynamic stability control, plus between noisy and less noisy settings for the active exhaust.

The engine's clearly a bit of a doozy, and ought to make an M4 seriously rapid on the basis of the pace it makes in a two-tonne 4x4. It sounds more raw than the 'S55' ever did - and there's more natural combustion noise about its audible character too, and a bit less digital tomfoolery apparent - which feels like progress. Like the best BMW straight sixes, it spins through the mid range in such a smooth, even, linear way that you won't wish it was a V6 or V8. It also has real top-end bite to compliment the first-order throttle response throughout the range. Feels torquey, too: much more so than 443lb ft leads you to believe it might - although given the dinner-table-like shape of the torque curve, you can easily appreciate why.

Otherwise, the X3 M Competition is an unusually focused, firm-riding sort of prospect - which makes it unlike plenty of cars like it. Although the adaptive dampers add a bit of flexibility to the car's dynamic repertoire, you can only really choose between 'fairly firm', 'firm' and 'jigglingly firm' on the ride quality. Meanwhile, if the more dialled-up tunes for the gearbox and steering make sense to you anywhere but on a dragstrip, I'll be amazed.

I strongly suspect it'd be about as much use off road as the average ten-year-old supermini, what with the lack of suspension travel and low-profile tyres. In everyday use, it'd certainly be right on the borderline of what I'd want to put up with in terms of ride comfort and ease of use, on a mix of good surfaces and bad, from a car like this - which, for my money, oughtn't be so firm and fidgety or highly strung that you'd think twice before pressing into service with the family.

But on the track, or just driven with a bit of gusto on the road, the X3 M Competition delivers a driving experience to pay back your patience. It's not quite up there with the madcap Alfa Romeo Stelvio Quadrifoglio for manic, swivelling agility, and it doesn't feel as balanced or adjustable through longer, faster bends as a Porsche Macan. And yet the X3 M is still powerful and stable under brakes; fast and slick both up and down the paddleshift changes; grippy and keen on turn in; stable and yet lively mid-corner; and generally a lot more purposeful and involving, and a lot more willing to be driven hard for extended periods, than many cars of its kind.

Predictable to a fault, it doesn't display for your affection at low speeds like some. The engine may seem a bit flatter than a burbling AMG V8, while because the suspension and steering are tuned for the last word in high-speed drivability, neither overwhelms you with instant chassis response or effusive, vivid dynamism of character. But like so many M cars, the X3 M Competition is still a serious piece of kit. We should have known, right? And there's a simplicity and honesty about it that there's a very good chance you might like, particularly if you don't like the remoteness and complexity of other fast SUVs, and the somewhat compromised appeal they often have as driver's cars.

Inspired? Search for a BMW here