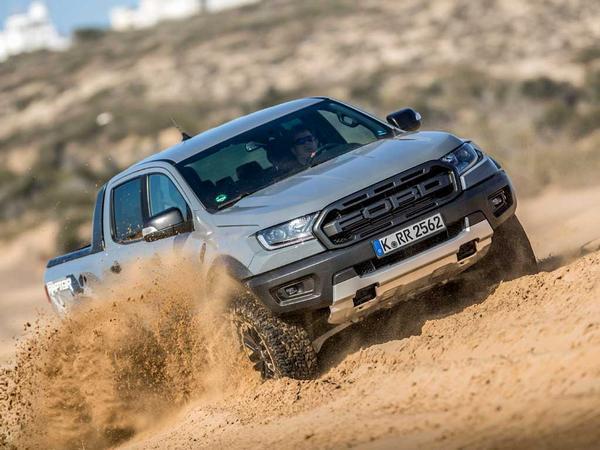 Europe's best-selling pick-up meets badass interpretation of the America-first F150 with the long-awaited Raptorisation of the Ranger. Finally the chance to bring some stadium truck attitude to the school run? Or as culturally misplaced as a bandana-wearing stockbroker riding his Harley along leafy Surrey lanes to a country pub?

Because that's the worry about transplanting such overt displays of Americana to UK roads, isn't it? Much as you wouldn't wear a MAGA cap down the local, there's a looming question over whether driving a Raptor of any kind on British roads marks you out as coolest guy in town. Or just a bit of a plonker.

The answer to that will have to come a little later in the year when answer the burning consumer questions like 'will it fit in a Tesco parking space?' and 'what will the neighbours think?' For this presentation, however, we're in Morocco. Which is, by some margin, totally unrepresentative of the kind of terrain most British Ranger Raptor owners will get to experience, given our obvious lack of wandering camels and opportunities to punt pick-ups off sand dunes. But seeing as we're here...

Those fearing some sort of dumbed-down Raptor-lite for this Ranger version will be pleasantly surprised too. Because, frankly, the global version loses little in attitude stakes to its all-American inspiration. F150 drivers might offer a sarcastic 'aw, that's cute' but, experience of the big daddy on British roads reveals it to be predictably oversized for any meaningful enjoyment. An amusing novelty, for sure. But not necessarily something you'd want to live with every day.

Credibility for the Ranger Raptor is maintained by fitment of equivalent long-stroke Fox internal bypass dampers like those used by the F150. In place of the American version's leaf-sprung rear axle there are coil springs and a Watt's linkage to bring some order to proceedings while the chassis rails have been beefed up and there's a whole 150mm of extra track via dedicated suspension hardware. And, yes, there's a Baja mode among the various off-road settings, which will be of precisely no use whatsoever in the UK, wherever you take it. But is nice to have anyway. Suffice it to say, the presence and attitude that make the real thing such a giggle have been successfully translated for a wider, global audience.

It's not all good news though. If you thought the F150 downsizing from a V8 to a turbocharged V6 was some sort of Commie plot then be prepared for worse news with the Ranger Raptor. Diesel might have been acceptable if it used the Ranger Wildtrak's 3.2-litre heavy lifter, but no. This celebration of all-American excess is powered by a four-cylinder diesel. Good for commercial users. But something of a let-down given the looks.

There are, no doubt, sound reasons for this being the only engine choice. But you wonder what might have been, even if Ford had adapted the Mustang's 2.3-litre EcoBoost petrol. It's set up for a longitudinal configuration and uses a version of the same 10-speed auto after all and has proven itself receptive to a bit of tuning. Could it not have given the Ranger Raptor a Ford Performance appropriate USP, while keeping realistic running costs for a global product? Project boss Damien Ross sighs the sigh of a man who's been asked the question too many times already, but it comes down to the torque required to hit the required payload and towing targets. He accepts things may change somewhere down the line but for now it's diesel or no.

If it appears surprisingly close in size on the outside to the F150 the Ranger Raptor thankfully feels a bit more normal inside, the cabin displaying some commercial grade plastics but nicely trimmed, spacious, well-equipped and arguably better built than the American version. 'Civilians' considering a Ranger Raptor as an alternative to an SUV or crossover won't be too spooked, put it that way.

There's clearly something funky going on with the sound of the engine because it sure as hell doesn't come across as your usual clattery four-cylinder diesel, at least over the speakers or wherever the sound is coming from. And on the road the sequential turbos mean decent low-end response from a variable vane initial kick and a bigger huff of boost from the second as the revs increase. It still doesn't seem quite right for a vehicle as macho as this to be powered by such a small engine but them's the breaks.

If not quite monster truck in stature, the Ranger Raptor definitely feels higher than your average SUV or pick-up and the driving style really is something unique. The powertrain is, perhaps, the least exciting element in the whole package but gets the job done and, frankly, given how low-geared the steering is you probably wouldn't want to be going much faster on the road. You adapt but with that and the give in the big sidewalls the Raptor doesn't exactly handle like a Macan.

Like its big brother the really fascinating element in its driving manners comes from those dampers. The Position Sensitive Damping technology keeps them settled in the middle of their stroke over low frequency bumps, meaning it doesn't flop or lollop into corners as you might expect. Body control is actually pretty respectable and, bar a little body on frame shudder, it combines waterbed plushness with reasonable composure. This side of a Rolls-Royce Phantom you'll struggle to find something that'll waft and isolate you from the road surface with such style, experience showing that even standard Rangers are surprisingly comfortable places for racking up the miles. All this with the ability to drop the inside wheels onto rock-strewn verges to avoid the inevitable W123 Mercedes taxis weaving about on local roads.

Because that's the thing. Thanks to those dampers Ranger Raptor rides with the same composure off-road as it does on smooth tarmac. And when the big hits start coming the dampers are allowed to work through their entire stroke, ramping up towards the end to create, in effect, a hydraulic bump stop that'll soak up the big hits and let you do really rather silly things over yumps, rocks, roots, sand and, well, whatever comes before you. That coil-sprung rear end and the more solidly mounted axle also mean the Ranger Raptor handles with more precision than its leaf-sprung American cousin and regular Rangers, investment in this significant engineering upgrade one area where the engineers successfully stuck to their guns for a tangible dynamic advantage.

The only weak link is the engine, which feels refined and up to the job on the road but seems a little overwhelmed when hauling the Ranger Raptor through deep sand. Fair enough, that'll challenge any vehicle. And it's clear the Ranger Raptor is - as promised - Built Tough and capable of taking a proper beating. But where the F150 backs up the wild looks with enough power to feel a bit daft the Ranger version is a little breathless.

What does this matter though? You'll struggle to find anyone who'll let you go full Baja anywhere in the UK and it's too wide to go green laning. Much as a GT2 RS's Nurburgring lap time remains an abstract for the way most owners will experience them, so too will the Ranger Raptor's undoubted ability in terrain like that found in Morocco. Leaving it all about the pose.

And on that score the Ranger Raptor is a definite win. Just shy of £50k (if you're paying the VAT) is a lot of cash for a pick-up truck. But you could price a Ford Edge up to a similar money without too much difficulty and which is going to look cooler on the school run? Hell, lifestyle signalling outdoorsy types regularly spend that kind of money for posing at the trailhead in tricked out Transporters. Why the hell not make a proper statement?

Don't try and make a sensible or rational case for a vehicle like this, because there are none. For big kids everywhere this is every Tonka or Tamiya shaped daydream you ever had made real. Embrace the silliness - your children will love you for it.