Dune jumping in North Africa is all well and good, but does the £50k Ranger add up in BoJo's Britain? 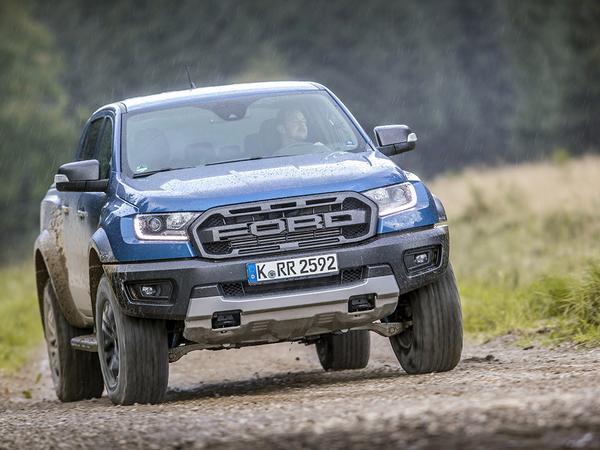 Phew, that was close - memory suggested the Ford Ranger Raptor was in danger of being the slowest pick up - and likely vehicle - ever driven on PH. Handily it zips to 62mph ahead of a Hilux (thank the 10-speed auto for that, against the six-speed the Toyota had when tested), even if it's said to be a thrilling 106mph dead heat at the top end. At which point an Isuzu D-Max will streak on to 112mph. Just FYI.

That said, the Raptor must set a record for price to performance on PistonHeads; without wishing to sound like another record (of the broken kind), the Ranger's mismatch of punchy aesthetic and puny performance is impossible to avoid, be that in the comments, the spec sheet or the driver's seat. From the outset the Raptor is the guy who's all arms and chest but can't squat his bodyweight; the looks are impressive and attention grabbing, though actual heavy lifting is out of the question. (That's not as bad a joke as it seems, either, because the Raptor has a reduced carrying and towing capacity over standard.)

This is not simply a game of Top Trumps, however, and we all know by now that there's much more to driving in general, and to this pick up specifically, than the bare numbers. Money has been invested in widening the tracks, installing extremely fancy Fox Racing dampers, larger BF Goodrich tyres, more powerful brakes, increasing approach and departure angles and so on. This is not simply a cosmetic exercise. Though arguably it succeeds on that score.

We've been made aware of the Raptor's ability before - an extensive and comprehensive assessment that involved, um, throwing it off dunes in Morocco. Now, though, a chance for a proper test: real British roads, involving (but not limited to) making room on small country lanes for others cars, actually merging into traffic on dual carriageways, scurrying through villages and other niggly tasks that probably aren't front of mind in a 5,400mm, 2.5-tonne pick-up when you're playing at Dakar.

Before we get there though, Ford UK insists on a reminder of what its pick-up will do when you're along way from the beaten track. Like when you're in a felled forest, for example. Or next to a rally driver on a test stage. Turns out low-range, off-road mode and knobbly tyres are fairly handy when it comes to the former (who knew?) and the Raptor feels more than quick enough when you're apparently allergic to braking. Point being of course that this is an all-wheel-drive pick-up that can hack it off road - probably more so than most of cars sold on the basis of their suitability for 'lifestyle' adventures.

And you know what? The Ranger is perfectly alright on the road, too. Fears of a truck buck-a-rooing its way down a high street simply never materialise, the Ranger's coil-spring/Watt's linkage back axle ably supported by the Fox dampers and delivering decent composure. It's certainly not immune to the odd shudder - it's a body-on-frame pick up, after all - and remains a fairly cumbersome corner-taker for that reason, but it's more than liveable. For a pick up, the ride is uncannily good, not only smothering the normal imperfections, but also dismissing kerbs, verges, potholes and anything else below the knee with ease.

Moreover, while the Raptor isn't exactly brimming with accelerative gusto, the 10-speed auto always keeps the twin-turbo diesel at the right revs for optimum performance. It'll cruise adeptly at not much more than idle, swiftly drop gears if an overtake is needed, and responds nicely to inputs from the lovely metal paddles as required - though that's pretty seldom, really, with 10 gears to choose from. Consequently, the performance isn't as inhibiting as might have been expected (even if it's still a little hard to level with the price) because the gearbox is so well calibrated. Just use more throttle than you think it'll need, and everything will be fine...

As for the Raptor's sheer size on UK roads, that could be a little trickier to get accustomed to. Of course against the F-150 Raptor it'll seem like little more than a die-cast model, but there's no escaping the fact that 15cm of additional width to accommodate the new tracks isn't going to make an already sizeable vehicle feel wieldy. And while it could be argued that the raised ride height helps with visibility, it also makes the driver even more aware of how much Ranger there actually is and how much space it's using up. Don't be surprised to find it flummoxed by a width restrictor. Or a parking space...

Here's the nub though: those that like the Raptor concept are going to adore the execution. Because it looks brilliant, all attitude and arches, yet isn't so silly as to be totally daft. It absolutely does the business dynamically, too, unequivocally off-road and more than adequately on it. And finally, while a little less tangible, the Raptor feels stoic and resilient, like it would gladly lap up punishment for season after season and year after year. There's not a squeak or a rattle anywhere at any point, even being flung around a stage. For those that value (and/or need) engineering integrity over the squidgiest of soft touch plastics, that's going to be important.

Granted, a V6-powered Amarok is going to offer better on-road performance for a similar outlay - but the Raptor doesn't advertise itself as the sensible choice. Instead it's great fun; a truck to make you smile without making so much mischief that it works against its everyday usability. And besides, the money invested underneath feels worth every penny when clambering over tree stumps, surmounting rocks or not getting stuck in the mud. Look beyond the butch facade and the spec sheet of the Ranger Raptor and there's real ability, as well as appeal, to be found throughout. Of course a four-cylinder diesel pick up won't be on the top of many shortlists for £50,000 - but any buyer with even a superficial interest should take a look. Prepare to be won over.

Search for a Ford Ranger here