The Huracan Evo is here. Can it live up to its new £200k sticker price? 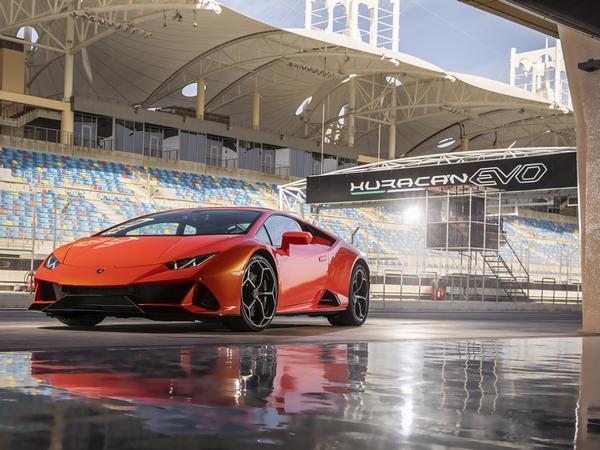 There are several very interesting but highly unimportant things I can now tell you about the Lamborghini Huracan Evo. For instance, if you're careful not to let the powertrain cool down too much between stints out on track, the exhausts will glow as orange as a setting sun before spraying out bright blue flames under full acceleration, as though the afterburners have been lit. This heavily-revised model will also power slide exquisitely away from tighter corners, but only if you've selected the Sport driving mode. Finally, its carbon-ceramic brakes are good for three very quick laps of a Grand Prix circuit, but much more than that will see them begin to wilt.

What I cannot tell you is how well the suspension does or doesn't deal with bumps in the road surface, or whether the steering has been improved when driving on the public highway over the woeful variable-ratio setup in the original Huracan, or how likely the seats are to give you lasting back problems if you spend any more than 30 minutes in their embrace. The media launch for the Huracan Evo afforded us only a handful of laps of the Bahrain GP circuit, though, with no road driving whatsoever. So this was a first impressions exercise rather than the full deep-dive, which will come later on when the first cars arrive in the UK.

Despite having watched several processional Bahrain Grands Prix over the years, plus one or two that were so exciting they'll live long in the memory, I simply didn't recognise the desert circuit in broad daylight. For the last few seasons the race has been run at dusk, so that by the time the chequered flag is being waved the only ambient light comes from the hundreds of floodlights that trace the circuit's flowing curves and its handful of very long straights. Rather than try to navigate an unfamiliar track layout on my own, however, I was able to follow an identical car driven by a young Dutch racer whose previous view of this circuit was through the windscreen not of a road-biased supercar, but his Porsche Supercup 911 GT3. 'Hanging around' seemed not to be in his vocabulary.

So while his bright orange Huracan Evo grew smaller with every sequence of turns, I switched out of Sport mode and into Corsa. Rather than allowing the car to slip and slide and drift away from tighter turns with the rear wheels spinning manically, Corsa mode locks the car down into the track surface and keeps it tidy, neat and precise. It was in this mode that I was able to refine my driving style and claw back precisely no ground whatsoever on my new Dutch friend. Off he went, disappearing around the next corner.

But in the midst of my humbling at the hands of Ruud van Missileboy there was at least a point being demonstrated, one that was both interesting and important. This new Huracan Evo is so much more rewarding to drive than the original model. It might even prove to be more engaging than the brilliant Huracan Performante.

For all its knockout styling and the soaring magnificence of its 5.2-litre naturally-aspirated V10, the original Huracan was actually a touch underwhelming. There simply wasn't enough poise or balance or malleability in its chassis to make you long to drive one over a McLaren 570S or even an Audi R8 V10+. Criminally, it simply wasn't that thrilling a car. The Performante version put that right two years ago, proving at long last there was indeed a world class supercar hidden within Lamborghini's V10 model.

Clearly, then, the Performante would in some way inform the Huracan's mid-life replacement, the Evo. Rather than simply transplant all of the Performante's upgrades and refinements directly into the new model, however, Lamborghini chose instead to borrow that version's engine (rated at the same 640hp at 8,000rpm and 443lb ft at 6,500rpm, but with specific engine management software) and nothing else. For the Huracan Evo's chassis, Lamborghini's engineers went back to the drawing board.

Rear-wheel steering is new. Torque vectoring is new. Lamborghini Dinamica Veicolo Integrata (LDVI) is new. Just about everything relating to vehicle dynamics has been changed or substantially upgraded. LDVI is the central brain that gathers data from all of the car's major functions - including the rear-wheel steering, torque vectoring, magnetic dampers, four-wheel drive, stability control, dynamic steering and the powertrain - makes a vast number of calculations and within 20 milliseconds is able to issue harmonised commands back to all of those functions. It means the various systems work together to achieve the best results possible, rather than the dampers doing one thing and the traction control something different altogether.

Consequently, the Huracan Evo is Lamborghini's most responsive and agile road car yet. More agile, even, than the Performante (and actually a fraction quicker around the handling circuit at Nardo). The system is so advanced it can predict the driver's intention in real time, so that even before they make a particular input, the car and its relevant systems have been primed to deliver the exact corresponding output. If LDVI estimates wrongly, it simply reverts to feedback (what the sensors and gyroscopes detect the driver has actually done) so that nothing too catastrophic can occur. It's new for Lamborghini, but not quite groundbreaking as far as the supercar sector is concerned.

Elsewhere, the bodywork has been revised to improve aerodynamic efficiency and increase downforce seven-fold (which is the same as saying 'from almost none at all to a little'), while the cabin now features a beautifully rendered 8.4-inch touchscreen in the centre console. But whereas Aventador drivers can now - and at long last - choose their own settings for the suspension, stability control, steering, engine and gearbox using the Ego driving mode, the Huracan Evo still does without it. The smaller, lighter, less powerful model doesn't need it, apparently. What that means is that as you cycle through the modes from Strada to Sport and then into Corsa, everything that's switchable gets noisier, sharper, edgier or stiffer. Basically, you still won't go anywhere near Corsa mode on a bumpy road for fear of being boinged over a hedgerow.

The cars we were driving (for three sessions in total) were all fitted with the optional Pirelli P Zero Corsa tyres, which are stickier and more track-focused than the standard P Zeros. On those tyres the new model has a much more obedient front end, which in tighter turns tucks in so immediately because of the rear-wheel steering that you'd swear you were driving the Huracan GT3 racer.

There is still a margin of safety understeer dialled into the chassis in quicker turns and through the very long, rising, fourth-gear right-hander towards the end of the lap you do need to be patient, lest the front end wash right out onto the apron that fringes the circuit itself. But elsewhere you sense a manoeuvrability in the rear axle that's entirely new. The basic chassis balance is much more neutral now, rather than being belligerently nose-led.

The Evo will powerslide as well as any four-wheel drive car if you're so inclined, in Sport mode at least, and you can fling it about and take enormous liberties because it's now so controllable at the limit. Matched with the precision and finesse that you discover in Corsa mode, that gives the new Huracan a much broader operating window than the prescriptive and stubborn original. The Evo is so much more fun for it. There is no longer the option to go without Lamborghini Dynamic Steering, but the variable ratio system is now more intuitive, more consistent and more natural, meaning you can position the car with confidence.

Aside from running out of bite after a few laps the brakes aren't the easiest to modulate on circuit and stability under very heavy braking from high speeds is far from absolute. Overall, however, the Huracan Evo is so much more rewarding to drive at the limit that it feels like an altogether new model, rather than a mid-life overhaul. What's most impressive still is that the new systems and the central brain that tries to predict what you're going to do next manage not to synthesise a thrilling driving experience, but conjure one. You as the driver still feel as though it's your skill that is making the car dance between corners expressively or carve through them neatly.

And the engine? It's still one of the finest performance car power plants on sale today. It's glorious. It doesn't have anything like the mid-range punch of a Ferrari 488 GTB's twin-turbo V8, but its searing top end more than makes up for it. The twin-clutch gearbox, finally, is perfectly suited to track driving. If there is a second question mark hanging over the Huracan Evo - the first being how it actually performs on the road - it is to do with its £206,000 price tag. That means it is no longer a rival for the R8 or the 570S, but for the 488 GTB and the monstrous McLaren 720S. Can it really stand tall in that sort of company? I hereby volunteer my services.