Don't fancy the '35 powertrain in a hatch, saloon, estate or SUV? Try the four-door coupe... 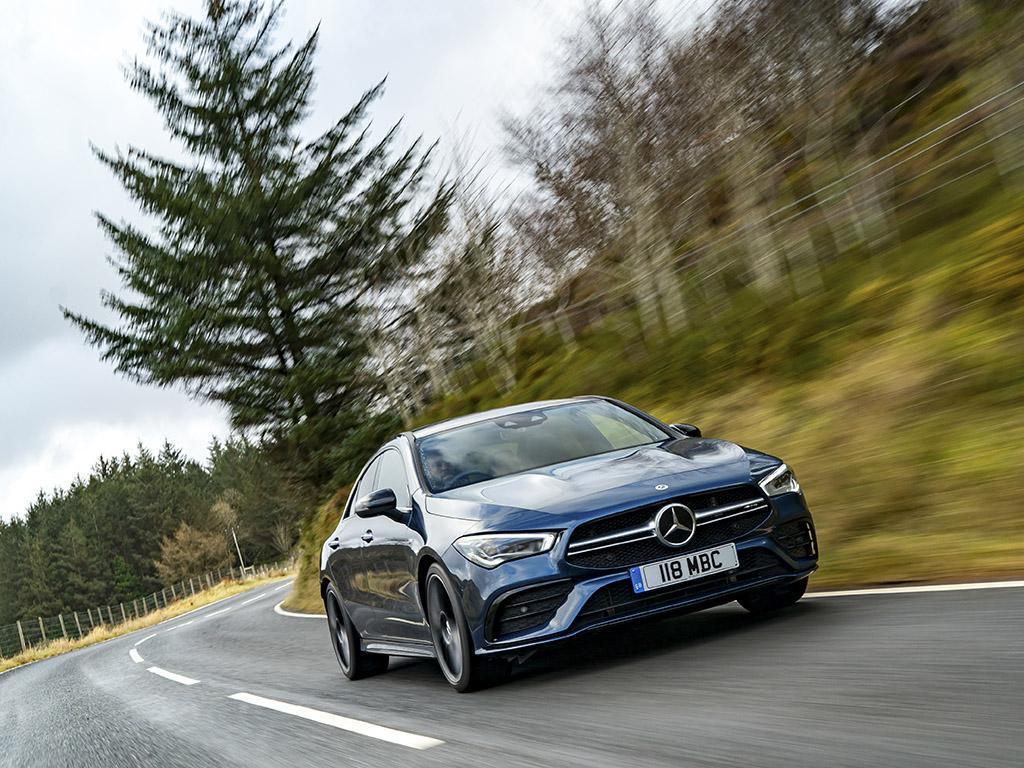 Picture, if you will, a Mercedes-AMG A35 hatch. Is it yellow? Does it have the Aero Pack as well? Is it being driven boisterously? Now, as an alternative, bring to mind a CLA35 Coupe. Is the spec more sober, the overall look a little more mature? You never know, it might look just like the Denim Blue car seen here.

Put a boot on anything and, immediately, the image is altered to one slightly less aggressive and more civil. See the Audi RS3, for example, Hyundai i30 N and, er, Ford Sierra Cosworth. It's easy to imagine, despite the cars' innate similarities, very different customers opting for the A35 and CLA35; the hatch could seem too shouty or too youthful to some, the coupe-saloon too demure and restrained for others. Where exactly that leaves the A35 saloon is a discussion to return to later.

A boot up the backside also means this particular '35 faces a less daunting set of rivals than its five-door brother. Because while that car has to deal with cars like the Golf R, Civic Type R, BMW M135i and all manner of other hot hatches, the four-door saloon (or coupe) at similar money is a far smaller niche. The Audi S3 is still on sale, but is now pretty old, the new 1 Series hasn't yet spawned its 2 Series Gran Coupe derivative, a four-door Mini JCW is about the only niche not occupied and, well, what else is there? Answers on a postcard, please...

Existential queries aside - don't forget the '35 range is already five-strong, with the GLB and Shooting Brake as well - the CLA certainly remains inviting on a cold and crisp winter morning. We now live in a time where an E-Class is basically five metres long, a 5 Series is even larger and an Audi A8 LWB is 5,302mm; to therefore get into a four-door that's 4,695mm from top to tail - y'know, the size saloons used to be - is refreshingly welcome. That (relative) slenderness also means a kerb weight that sneaks in under 1,600kg, an official MPG that nudges 40 and a boot that's still over 450 litres. Of course it's no featherweight, though the CLA's dimensions do make you question the need for anything larger.

Whatever, nobody is here for a What Car assessment of the CLA. Entry-level or not, this is still an AMG product, a car that Tobias Moers said "enables stepping into the fascinating world of AMG Driving Performance in a particularly emotional way." So what's it like?

With a bit more familiarity now, the A-Class interior makes sense, and still feels a step ahead of rivals in terms of sense of occasion, tech integration and quality of displays. This was a car optioned only with paint and a driving assistance pack, so actually is representative of a near-standard car. And it's really good. There's ample space in the front, lovely touchpoints and an ambience that conveys those premium aspirations nicely. As it should, for the price, though that's another point to address soon...

Alright, here goes, confession time: perhaps the original A35 UK verdict was a little harsh. The mistake was in comparing it other AMG products higher up the range, where it was inevitably going to struggle, as opposed to the more immediate rivals it should have been pitched against.

The CLA benefits further here, as it's part of a drive day featuring a whole host of other Benzes. In the context of the non-AMG Mercedes, the 35 immediately shines: sharper, firmer, angrier, more incisive. The AMG influence is clear pretty quickly - this is no badge engineered special. While the steering is speed sensitive and variable ratio, there's no adjusting the weight through the Dynamic Select, meaning there's a consistency and predictability that isn't always there in those cars that offer extra modes.

Furthermore, where there are parameters to adjust, the CLA35 makes them feel worthwhile. The AMG adaptive dampers deliver ample poise and control in normal mode, with seldom much requirement for more, then a tangible (not terrible) increase in focus with Sport. Initially, Sport+ can seem a little brusque in its control, though give it a few minutes and you'll realise there's a subtlety and class to the damping that means it never feels insufferable.

And although this is not some reimagined Evo for the 2020s, the CLA is entertaining to drive. Brake pedal feel is really good, that damping gives confidence, the chassis - while perhaps with a tad more understeer than the really keen would like - is responsive, mass control good and the four-wheel drive shuffling around power slowly but surely to get things pointing straight.

The powertrain is nice, too; Mercedes have sometimes come in for some stick recently for gearboxes, but this dual-clutch is hard to fault: swift up and down the ratios, intelligent in automatic mode and fitted with paddles that really encourage use of them when driving with greater gusto. While the M260 has been made to feel a little old hat by the M133 of the '45s, there's still decent throttle response, a solid wad of torque and a good appetite for revs. It'll happen discreetly, but the '35 - through its combination of an enthusiastic engine, well sorted dynamics and reasonably compact dimensions - soon has you driving really rather briskly. And quite enjoying it.

However, by now, a few qualifications will have become apparent - 'quite' this, 'almost' that, 'nearly' an awful lot else. And, to be frank, a Mercedes-AMG that costs comfortably more than £40,000 - the CLA45 starts at £40k, this Premium Plus is £46k, the options take it to £48,060 - needs to leave a more emphatic, less equivocal impression than just being pretty good. It's not the money that's an issue as much as a perception of value: even at more than £50,000, an A45 feels like an experience worth that much, thanks to its formidable engine and circuit honed dynamics. This CLA, entertaining and broadly talented though it is, never gives the feeling of being a car worth quite what's asked for it.

There's a solution, though. Those intrigued by the idea of a subtle, unassuming, 300hp AMG four-door - and experience of this car suggests they should be - should remember the A35 saloon. It costs thousands of pounds less than the CLA equivalent, boasts all the same technology and equipment, and has its own discernible style - the CLA by contrast a cookie cutter copy of a CLS. Unless there's some transformative dynamic difference, the saloon looks on paper to be the four-door '35 of choice, tiny market though it is; that said Mercedes know a thing or two about niche-busting, so don't be surprised to see a host of Coupes, Saloons, Shooting Brakes and GLBs on the road soon alongside the hatch. Then it'll be time for the '45s...