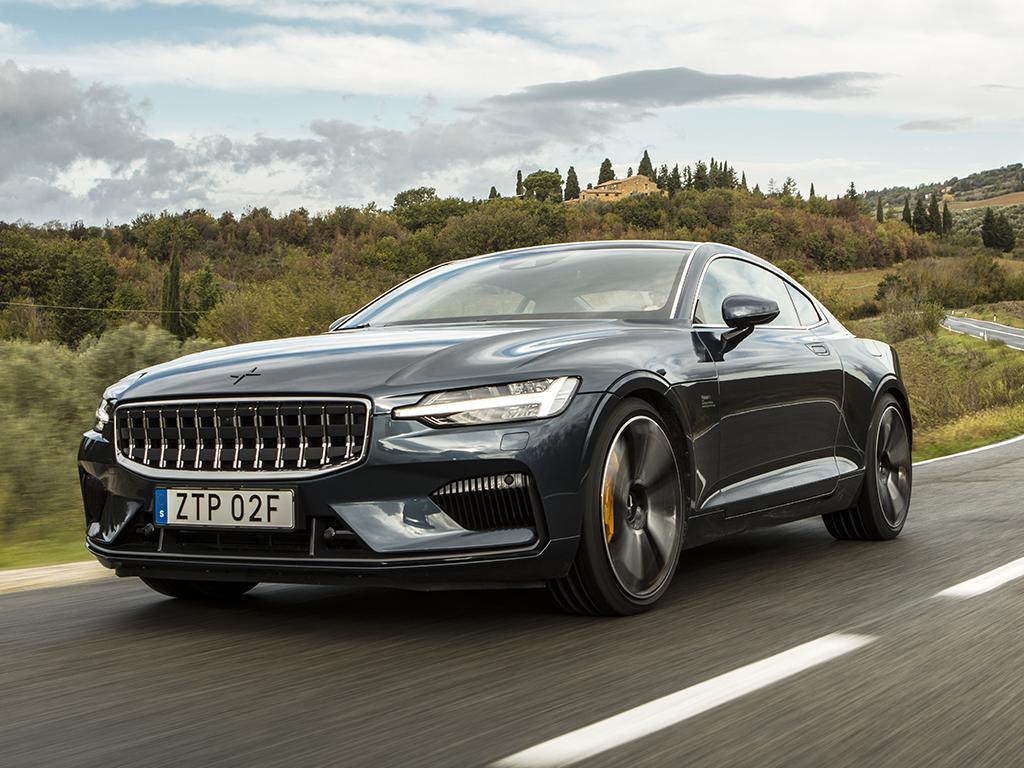 Sat outside the renaissance architecture and elaborate decorative chintz of Florence's Villa Cora, the Polestar 1 cuts an understated but elegant figure. Its clean lines, frameless door mirrors and clearly Swedish minimalist design influences are in stark contrast to what could be the ultimate bunga bunga party hotspot. New versus old. Technology versus tradition.

But Polestar's recently instated PR team insist the choice of location is a deliberate ploy to highlight just how cutting-edge and modern this box-fresh company is. This is an outfit that's busy replacing the tired and much-maligned showrooms of today with chic "Spaces", offering customers the chance to treat car ownership like a smartphone contract and producing nothing but 100 per cent electric vehicles from next year.

So why kick things off with a 609hp hybrid luxury GT? It's a good question that even the folk at Polestar struggle to answer, with short developmental timeframes, budget restrictions and other minor road blocks the often cited replies. But with only 1,500 slated to be produced, this is more a proof of concept rather than the permanent foundations for a new business.

To get wrapped up in powertrain arguments is to do the car an injustice anyway, because it looks absolutely stunning. More beautiful in the flesh than on screen, with a rear end that seemingly dominates the width of any road, a menacing front grille and light signature, a gloriously crisp side profile and massive 21-inch rims that positively fill the flared wheel arches.

If Polestar, the funky electric sub brand of Volvo, intended to distance itself from its sleek but slightly stuffy sibling with its first car and stylistically, then the 1 hits the nail firmly on the head. Every angle works and out on the road, it all makes sense. Which is more than can be said for the rest of it.

For example, the majority of the bodywork is fashioned from carbon fibre reinforced polymer, with heavier steel only used for important crash structures and the chassis (a spliced version of the Volvo S90's) yet it still weighs 2350kg. Despite the addition of a specialised carbon fibre cross member, dubbed 'the dragonfly', that's on par with the all-electric Porsche Taycan, and heavy by most standards.

This is down to the powertrain, which consists of trick double electric rear axle motors, that generate 232hp and 354lb ft of torque, plus a 2.0-litre turbocharged and supercharged petrol engine at the front that adds 309hp and 321lb ft. There's also a clever (but also hefty) crank-integrated starter generator that sits between the crankshaft and the combustion engine to act as a starter motor and deliver another 68hp when needed.

All of this is channeled through a clever torque vectoring system, which sees each rear wheel receive its own electric motor and planetary gear that allows the outer wheel to be accelerated through corners for improved stability and grip. You can see how the pounds were piled on.

Propping up all of this is a suspension system from Öhlins, which is manually adjustable, allowing the driver to park up and individually set the damping with the twist of a few surprisingly analogue dial. Forget your electro-mechanical wizardry, this is proper old school stuff that requires sleeves to be rolled up. Slightly pointless but utterly brilliant at the same time.

It does feel a bit at odds with the rest of the package, given that the myriad wires and electrical gubbins that power this innovative drivetrain are proudly displayed in a perspex case in the boot for all to see. But it transforms what might be conceived as a hot Volvo to something completely original.

Out on the open road, the Polestar 1 immediately feels purposeful. Even in its mid-range settings, the ride is firm and planted without crashing over potholes and blemishes in the road, while the steering feels direct and cleverly disguises the overall size and mass of the car.

Throw it into a corner and it grips with fervour, threatening to tear the tyres from their rims before catapulting out of the other side. The driving experience won't spike adrenaline like a proper slippery sports car will and the noise is massively disappointing, but there is no denying it is gut-bustingly quick.

The 0-62mph sprint takes just 4.2 seconds and the 50-75mph rolling acceleration time is just 2.3 seconds. Because of this, stopping power is understandably huge and is provided by Akebono, who previously supplied the McLaren P1. Here you get six-piston aluminium monoblock callipers and 400 x 38 mm discs on the front and 390mm discs at the back. They cut such an imposing figure that the smallest wheel that will fit here is a 20-inch alloy. Not that you'd really want to do that.

However, these mammoth stoppers aren't just for pub bragging rights, because they also provide plenty of adjustable regenerative braking to top up the batteries. Alternatively, there's a function nestled in the menu system that allows batteries to be brimmed using the engine if you want a more natural feel to the brake pedal without sacrificing notches on the digital display.

As soon as you've finished pinning the throttle and rearranging internal organs at every available opportunity, the Polestar 1 will sedately travel for 78 miles at speeds of up to 100mph without troubling the petrol tank, thanks to twin battery packs located where a traditional transmission tunnel would be. These figures better any plug-in hybrid currently on sale.

Refinement is generally good but there is a slightly annoying whine from the electric motors when travelling at motorway speeds. The Mercedes EQC (the quietest electric vehicle we can think of) feels vacuum-sealed from the outside world by comparison and even Bentley's Continental GT is a quieter, more peaceful place to waft - although it feels no way near as taut or eager to attack a favourite road.

The interior is also a bone of contention, because almost everything is pinched from its Volvo partners. At £139,000, you'd expect the graphics on the portrait touchscreen to be original and Volvo's 12.3-inch digital instrument binnacle is starting to lag behind some of its rivals now in both performance and appearance.

It is understandable that savings had to be made, but we really hope the upcoming all-electric models boast more of an individual character inside. Oh, and the pop-out door handles featured here need some attention. First impressions are everything, but this is the automotive equivalent of shaking hands with that weird bloke from IT. The guy who always has strangely sweaty palms and a particularly limp grip.

Still, the level of standard equipment is impressive and there isn't much of an options list to peruse. All customers receive every premium gizmo in the Volvo armoury, leaving only five exterior paint hues and a handful of alloy wheel finishes to ponder.

The blistering pace, innovative powertrain, luxury GT looks and lofty price tag make natural rivals difficult to conjure up. The BMW 8 Series is probably closest in terms of price and specs, but then others have cited models from Bentley, Mercedes-AMG and even Aston Martin as more fitting contenders.

But that's the point. Polestar has set out to do things differently and its first hybrid model is like nothing else currently on sale. Achingly stylish, fast, fun up to a point, comfortable and strangely alluring, it has a canny knack of tempting drivers back for more. It's the sort of car that's likely to surprise even after months of ownership - like when you suddenly notice the illuminated Polestar logo embedded into the sleek glass roof is also fashioned from carbon fibre.

Undeniably a halo model, Polestar isn't going to struggle to shift the 1,500 units it plans to produce. But with such an intriguing hybrid set-up, convincing customers to go all-electric might be a slightly trickier task.