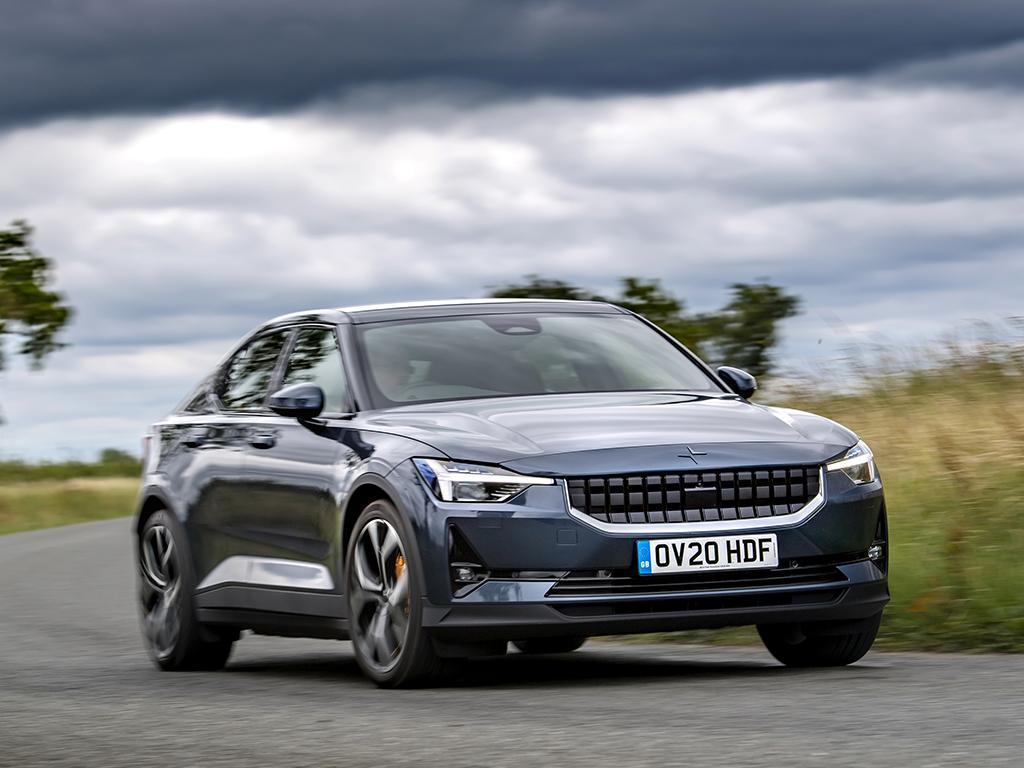 We ate herbaceous pancake wraps with barbecued miso aubergine, crunchy slaw, pickles and a Jersey Royal and summer pea salad. We drank water from reusable Chilly's bottles, used compostable cutlery and cleaned our hands with a plant-based sanitising gel before lowering ourselves into the vegan-weave upholstered interior of the zero tailpipe emissions Polestar 2.

It was more like playing social conscience bingo than attending a new car launch (they tend to be fairly contemptible affairs by comparison with their lavish hotels, airliners and enormous carbon footprints). Polestar wants to align itself with a certain set of values and it has chosen to be pretty upfront about it, all of which means this new Volvo offshoot couldn't be more of a millennial if it tried. What next, huffily deleting Instagram posts that don't get enough likes?

The first Polestar I drove (back in 2014) was a performance-tuned version of a Volvo estate. Since then Polestar has become a standalone brand under the same Geely-owned umbrella. It set out its stall earlier this year with the Polestar 1, a £140,000 luxury GT with a hybrid powertrain. It was a slightly odd way for Polestar to introduce itself to the market because that isn't even close to the price bracket the rest of its cars will sit in. What's more, no other Polestar will use a combustion engine. Instead, and as with the Polestar 2, they will be all-electric.

So why write about them here? There are a number of things that make Polestar's Tesla Model 3 competitor worthy of PH. First of all, its pair of electric motors generate more than 400hp and the better part of 500lb ft of torque, and when you bury the accelerator pedal the g-forces are dizzying. I reckon you'd need a four-wheel drive Porsche 911 Carrera S to get away from the line any quicker. Secondly, if you spec the £5000 Performance Pack, your Polestar 2 will come with uprated Brembo brakes, stickier rubber and manually adjustable Ohlins dampers. Sorry, what? I've never been made to sit more upright when reading an electric car's spec sheet. Fiddling with damper clicks on an EV hatchback? Maybe the future is more titillating than we thought.

Instinctively, I feel as though fitting trick dampers and grippy tyres to an electric car somewhat misses the point. They're bought for their clean running and low fuel costs, after all. But that won't always be the case and one day in the future, when we're all being ushered towards EVs because that's all there is, knowing there are some out there which value driver involvement will make people like us very happy. Besides, I've asked countless times before how electric cars can be made to appeal to keen drivers and Polestar has just offered an answer, of sorts.

On the subject of appeal, there aren't many cars in production today that can be described as beautiful. I reckon the Polestar 1 is firmly on that ever-shortening list, though. Inevitably, the 2 loses its stablemate's show-car proportions - the five-door hatchback is very upright and quite tall, somewhere between a conventional hatch and an SUV - but for me its lines and styling are executed every bit as well. It makes the Model 3 look blobby and amorphous, like a deep sea fish that's been scooped out of the water and plonked on land under a single atmosphere of pressure.

Even better than the exterior design is the Polestar's cabin. The quality is off the dial, while the care invested in the finer details - such as the faceting of the trailing edge of the dashboard topper, the floating section within the facia of the dash and the lovely soft plink-plink-plink of the indicators - speaks of rigorous design and engineering throughout. That seems to be what Polestar stands for, which makes a refreshing change from the endless self-promotion and publicity stunts you might associate with a certain rival. I'm tempted to say integrity-versus-vanity covers it, but that feels just a bit harsh on Tesla.

You sit high in the Polestar 2, but with its door tops and dashboard raised up as well you feel cocooned in the cabin. As is the way with electric cars the batteries are spread out across the floor, meaning you sit in an elevated position on top of them. Given the 2's reasonably modest dimensions, the 78kWh battery pack is a substantial one, only fractionally smaller than the battery you'll find in a basic Porsche Taycan.

Officially, the WLTP range is 292 miles, which is short of the 348 miles Tesla claims for the (even faster) Model 3 Long Range. It weighs 2,123kg, making it much heavier than the Tesla and only one skinny adult lighter than the Bentley Continental GT V8, which is a far bigger car overall. If the Polestar were any smaller in size and lighter in weight, it'd be dense enough to suck in stars and swallow them whole. Still, a 0-62mph time of 4.7 seconds is plenty brisk enough to put that weight figure to the back of your mind.

The basic price is £49,900, which is important. It means the 2 qualifies for the £3000 government grant for EVs (which is only valid on cars costing less than £50,000). Optional extras don't factor into EV grant eligibility, so if you spec a Polestar 2 with the Performance Pack, you'll pay £51,900.

Strong money indeed, but to help sugar the pill you do get a very good infotainment system thrown in. The Polestar 2 is the first production car to feature Android's new operating system (fear not - your iPhone will connect as well), which uses a number of familiar apps such as Google Maps and Google Assistant. There are very few buttons in the Polestar's cabin, most of the functionality being buried within the large touchscreen, as seems to be the way these days.

Buying in the human-machine interface from specialists like Google will surely prove to be the way as well, because this system is immediately more intuitive than most proprietary car manufacturer systems. It isn't flawless, though. On the journey home to Bristol from the Millbrook Proving Ground in Bedfordshire, Spotify simply refused to work, while Google Maps had a wobble of its own. It was determined to take me along two sides of a triangle, when the hypotenuse would save me 10 miles of driving, get me home 15 minutes sooner and save 10 per cent of battery charge as well. Why didn't Google Maps figure that out for itself?

My five hours in the Polestar 2 were split into two journeys. On the way to the test track I averaged 61mph and used 80 per cent of the battery's charge over 146 miles. The 120-mile return journey was slower but more direct (so it took about as long as the outbound journey) and I used 64 per cent of the battery's capacity. Little else chews into an electric car's usable range like a quick motorway run. If you venture anywhere above the speed limit, the wind resistance becomes enormous and you can watch the range read-out slip faster than the odometer ticks around. I therefore wouldn't bet on the Polestar's actual motorway range being much more than 160 miles. On slower roads, however, you'd get 200 miles from it without really trying, and probably another 50 or so if you did try.

My journey there and back took in a bit of everything, from city driving to open B-roads, and from motorways to flowing A-roads. The Polestar 2 feels at home everywhere. It's effortless in town and civilised on the motorway, and almost as shockingly accelerative from 60mph as it is from nothing.

Polestar says a third of buyers are currently specifying the Performance Pack, though I wonder what percentage of those will ever tweak their damper settings. Whatever the figure, Polestar doesn't expect owners to fiddle with their damper settings day by day (making adjustments requires access to a ramp), but instead arrive at the settings that suit them, then leave them well alone. The car I drove was set-up right down the middle, with 20 per cent of adjustment available in either direction. It could be made a good deal softer or firmer, therefore, depending on your preferences.

Me? I might open the dampers a shade just to settle the ride, but in truth I liked the way the car found its way along a road. Ohlins' ideology is for a very fast return to centre, a bit like twanging a taut guitar string compared to a loose one, so when you bump through a compression in the road surface, the dampers yank the body back to its normal position as quickly as they can. The thing is, they do so even if that's sooner than would be comfortable or soothing, meaning the suspension wilfully trades a dose of fluidity for precision and iron-fisted body control.

Over smaller lumps and bumps the ride quality is very good indeed and the tyres are kept firmly pressed into the road surface. But with so little suspension travel, bigger imperfections like sunken drain covers do tend to shudder through the entire car. The net result is a mostly very comfortable machine that feels far lighter than its 2.1-tonne kerb weight.

It's agile and responsive with very accurate, if not at all communicative, steering. There's no doubt Polestar sees the 2 as a proper performance car, and not only in the way it accelerates. But is it the one that makes me believe EVs can be truly exciting to drive? Despite its agility, poise, sure-footedness, tremendous grip and massive performance, it's not.

Meanwhile, the Brembo brakes are hugely powerful, though you only tend to use them when really driving hard. The default position is to turn the regenerative braking right up and avoid using the brake pedal as much as you can. Incidentally, pedal feel as the car shuffles between inverting a motor and clamping pads against discs is very good indeed.

In terms of how it drives, the Polestar 2 is more satisfying than any other vaguely affordable EV out there. The firm's top executives say they're 'optimistic' that over-the-air updates will improve the car's range in time, but until that happens, the equivalent Tesla will remain a more usable machine, particularly over long distances. The Tesla Supercharger network, at transport hubs and motorway service stations especially, makes Model 3 ownership very convenient, too.

Nonetheless, it's the Polestar that I long to own. I'm drawn to the company and everything it stands for as much as I'm drawn to the car itself. If I were in the market for a £50,000 electric car - despite knowing what I do about range and charging - I'd look no further.