Yep, another 595 special edition. But this one gets gold wheels 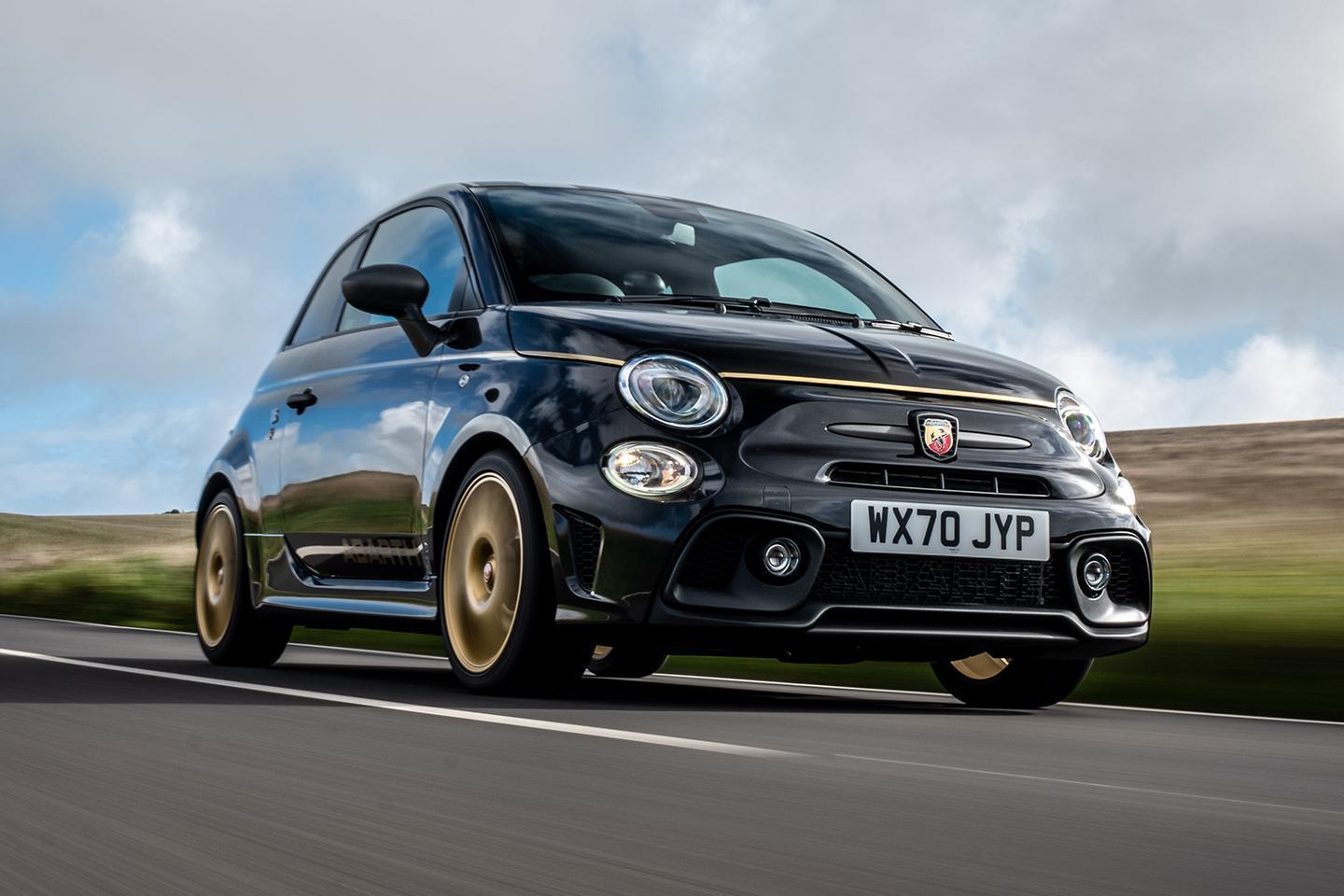 It's not yet clear how long the Abarth 595 will remain in production. The base model has been with us since 2007, receiving a major update with the rest of the Fiat 500 range in 2017. All of its original rivals have been succeeded by larger cars. Fiat has stated that the arrival of its all-electric 500 will not kill off the petrol models (despite earlier speculation) which probably isn't surprising when you consider that the 500 is a top seller in ten European countries. Or if you notice how many specced-up 595s there are darting around Knightsbridge. Dinky it may be, but the model is a certified cash cow.

As far its maker is concerned then, the 500 is a line-up that just keeps on giving. Hence a return to Abarth's back catalogue for yet another spiritual forebear to hang the next special edition model on. In this case it's the A112 Targa Oro (or Gold Ring) we have to thank for the 595 Scorpioneoro. Like the 1979 A112, the new iteration mixes black paint with gold details, creating one of the most eye-catching versions of Abarth's VW Up GTI rival yet. It's a proven recipe, of course, and naturally, it gets an inflated special edition price of £22,345.

That's £70 more than a Ford Fiesta ST-2, but (to these eyes at least) it looks the business. The matte gold 17-inch wheels, the gold pinstripe and Abarth door decals pour another dose of caffeine onto an exterior that's already a double espresso with two sugars. The interior gets a slight lift with gold Scorpioneoro logos stitched into the headrests of the 595's bolstered buckets, gold details on the mats and the obligatory gold plaque displaying 'One of 2000'.

Other than that, though, it's a familiar recipe. 165hp 1.4 T-Jet powering the front wheels, 2.3-metre wheelbase and a rorty exhaust note to go with the racy image. One that's remained fundamentally unchanged since some kid called Lewis Hamilton won his first F1 title or, if you prefer, Katy Perry kissed a girl. And don't you know it upon first climbing inside this Abarth, where there are indicator stalks familiar from the Mk2 Punto and no reach adjustment for the large diameter steering wheel.

For this five-foot eleven tester at least, that, combined with the awkwardly high seating position provided by the buckets, means you're forced to either have cramped legs or stretched arms to find anything close to a comfortable position. I opted for the latter after a short stretch on the motorway to reduce the onset of cramp building up in the right foot, which thanks to the lack of cruise control, can't be rested. It's a frustrating discovery and is borderline unacceptable, especially when cheaper alternatives are so much better in comparison. The Up GTI excels here.

The 595 is pretty frugal, though, easily averaging 40 to the gallon on a cruise, and despite making do with five speeds, it's remarkably calm at motorway speeds. For such a small car the sound insulation is pretty good, too, and the sound system is decent, not causing any vibrations or rattles in the trim. The car feels solid. While the dash design is funky and the digital instrument cluster display combines functionality with traditional 500 dials nicely, you are forced to work with a little (it's seven inches diagonal) and not particularly responsive infotainment system. Thankfully, Apple Carplay and Android Auto is included as standard.

Unsurprisingly, the 595 is less at home in the outside lane of a motorway than it is on tight city streets and twisting country routes. Unlike the rock-solid Esseesse we drove last year, the Scorpioneoro rides pretty well on London's uneven tarmac. The punchiness of the four-cylinder engine, the easy reach and slickness of the manual gearbox, and the lightness of electrically assisted steering makes it a fun companion in the city. The ride quality gets busy over cracks and ridges - this is a tiny car, after all - but bigger imperfections and speed humps are dealt with consistently enough. It means there's genuine entertainment to be had within the 0-30mph window.

Out on the open road, things are initially positive. There are Koni dampers on the back of 595s these days, and the 16-valve engine pulls harder than you'd think to its 5,500rpm peak. Clicking the TTC button on the dash (its design does little to illustrate its significance) engages Abarth's Torque Transfer Control system, which prevents the over rotation of an outside wheel by independently applying the brake. It noticeably cuts torque steer, so despite the rim being devoid of feel, on a dry road at least, you're given confidence enough to hammer into corners and jump quickly back onto the throttle so the software code can haul you out in the right direction. It's a right old laugh.

At pace, the car's natural balance is to slightly push on its front axle into bends, requiring a fully lifted throttle to remain neutral or a trailed brake to encourage small degrees of rotation. Thanks to the quickness of the throttle in Sport mode, you can use the engine to play with the balance through a bend, which is gratifying. That being said, the Scorpioneoro's 'standard' 595 chassis means it doesn't possess the body control for you to really take it by the scruff of the neck. Quick changes of direction leave you wanting for tighter damping, although there is plenty of grip on both axles. Cross country pace is brisk.

Truth be told, though, you're never full immersed in the experience; partly thanks to the awkward seating position, but mostly because of a shortfall in feedback provided by the control surfaces. It means that while the Scorpioneoro looks the part on any given B road, it isn't living up to the image inside. Moreover, I couldn't help but miss the raspy tones of the optional Monza exhaust system either; the gruff note of the turbocharged engine is entertaining, but from previous experience it's the freer pipework which provides serious giggle potential. For all its come-hither gold highlights, this doesn't feel like a car worthy of setting a 5am alarm for, even it does still conjure up the occasional grin.

That's all as before, then, because the Abarth 595 and its earlier variants have never really been objectively brilliant. Even in the early part of the last decade we were left wondering how anyone could justify paying a higher premium on a smaller, less technically capable machine when the likes of the Mk7 Fiesta ST were around. In 2020, the subject is now so well trodden that it could almost be considered moot. Fiat has decreed that the 595 must persist, whether it coincides with logic or not. Purchasing one is therefore purely a function of the heart. The introduction of a black and gold theme to the inventory does nothing to dampen the prerequisite spirit.