Alfa's 540hp mega-saloon has arrived at last. It was worth the wait

There is a very real chance that nearly half of all Giulia GTA buyers will put them to regular road use. Or that’s what we’re choosing to divine from the fact that of the 500 that will be built, 50 per cent have so far been ordered in five-seat GTA format. Apparently, not everyone wants to combine 540hp with a big adjustable wing, two seats and harnesses mounted to a half roll cage. Although we can’t imagine why...

In the metal, the GTAm ranks as one of the most menacing Alfas ever made. Where former sports cars like the 4C and 8C are beautiful, and even the regular QF pretty, the plus-£150k version (more on that price later), with its ducts and intakes and extended wheel arches, is nakedly aggressive. If you’re not sold on it yet, wait till you see it; it’s a traffic-stopper. Much is to do with the stance, which appears even more purposeful when you frame it against the Elan Valley in Miami-grade sunshine.

Not that we penetrated deep into Wales solely for the backdrop. We went west because the roads are tremendous, and befitting of a machine primed to offer an optimal mix of road and track performance. The Giulia QF underneath the GTA gets an all-round technical makeover that includes a mechanical boost for that aluminium motor to 540hp, thanks to lighter conrods, new piston oil jets and some map tweaks which extend the turbos’ operating window. The gain is only 30hp more than standard, but this isn’t a power-focused upgrade, rather one that focuses on extracting the maximum from that Giorgio platform. Which, you might have read recently, is due to be culled (or, at least, significantly altered) as part of Stellantis’s far-reaching electrification plans. 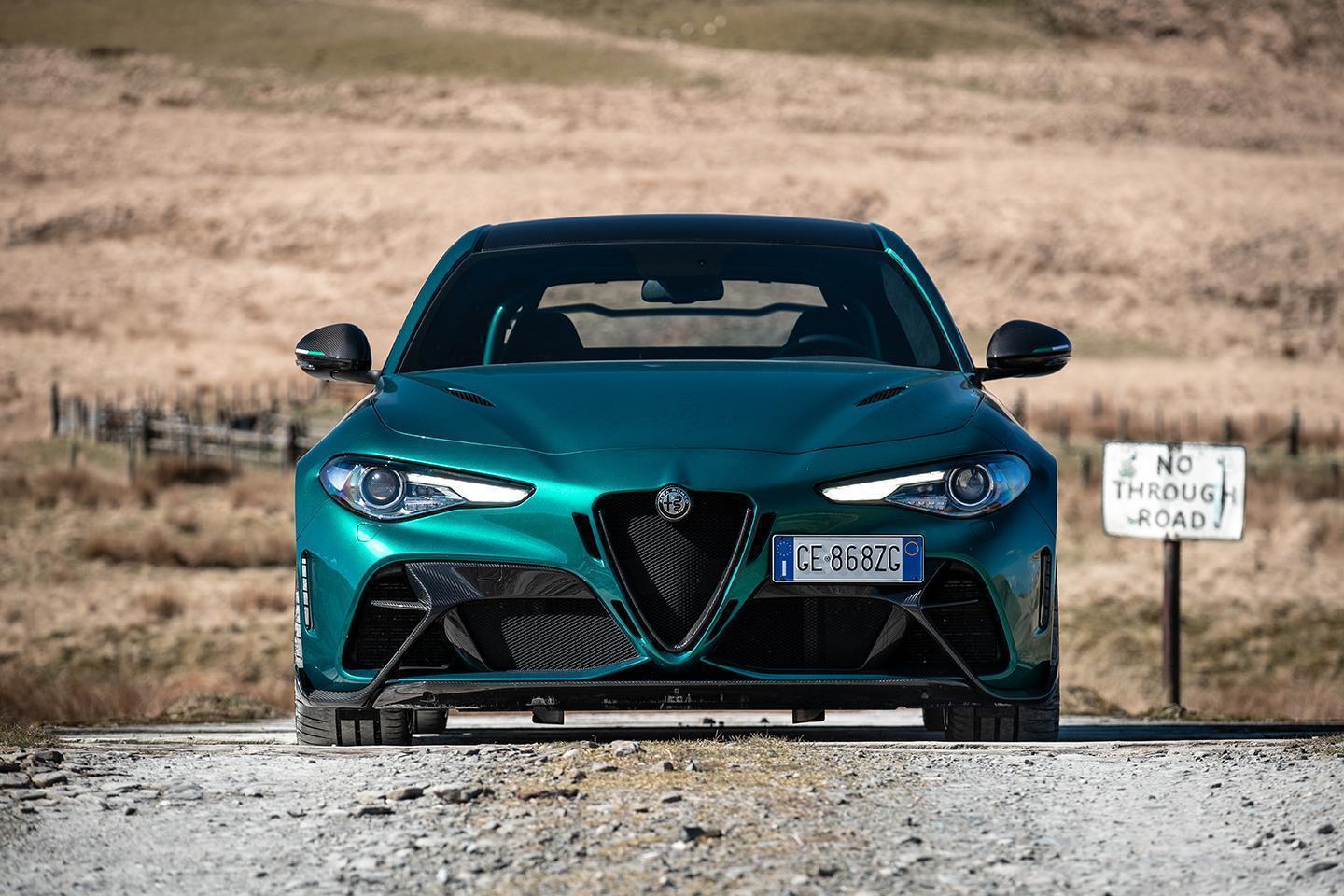 To ensure that this variant reaches its full potential, Alfa Romeo called upon its Formula 1 partner, Sauber Engineering, to comprehensively overhaul the chassis. The result is virtually a pair of welded-up rear doors away from going full Nürburgring VLN race spec, with new dampers, springs and firmer bushes alongside tracks that place the wheels 50mm (!) wider on both axles. The GTA and GTAm both use the same eight-speed ZF automatic gearbox as the regular car, retuned for the higher-spec application, and mated to a carbon fibre prop shaft and limited-slip differential which is endowed with Alfa’s clever torque vectoring tech. There is Akrapovic pipework, too, while 390mm carbon ceramic brakes are cooled by bespoke ducting directed from the new carbon openings on the nose.

The GTA has been on a serious diet as well. Carbon fibre features on the bonnet, wings and boot, as well as the bumpers, bucket seats and wheel arch extensions, while the 20-inch forged wheels are lighter centre-locks. All in, the GTA is as much as 100kg lighter than the standard car, with the GTAm, complete with its fixed carbon rear wing, half roll cage in place of a rear bench and polycarbonate rear windows, weighing in at 1,580kg, according to Italy’s STDA grade - although 1,520kg is the number that’s been touted elsewhere. The less extreme GTA is no more than 25kg heavier. In both, you still get the standard car’s dashboard, which includes infotainment and air con. But there’s no questioning which Giulia feels more special to sit in. The harnesses see to that, even before you spin the crank. Press the starter, and the motorsport transformation is complete.

The 90-degree V6, originally developed by a team of both Alfa and Ferrari engineers, has always been characterful, but in this stiffened, higher focus platform, its presence is even more significant. When warmed up and ticking over, its vibrations can be felt through the low-mounted fixed-back seat. But click into first, gingerly lift the brake pedal, and the QF’s inherent road friendliness remains. It feels entirely content trundling along, with the DNA drive system’s softest setting letting the eight-speed slosh through ratios and lean into the motor’s unchanged torque delivery. The ride is, no joke, supple.

Thanks to the rigid, lightened structure, the workload of the higher-spec GTA suspension is so isolated that bumps and surface cracks are absorbed to an extent that would shame most road-focused premium cars. The GTA is still a Giulia at heart, so there’s little to suggest that those to have ordered the five-seat, fully glass-windowed model couldn’t extend their drives to include cross-continental trips with the family, as unlikely as that seems in such a rare and expensive model. Yet when it comes to everyday driving, this feels like an upgraded QF, rather than a totally new car – and that’s a good thing.

Turn up the pace – as you inevitably will, because the temptation in an Alfa that barks and crackles under load is too strong – and the GTA’s character surges through the relaxed demeanour like a nuclear submarine punching through Arctic ice. This is a 3.8-second to 62mph rear-drive car (the slipperier GTA is a 3.6sec one), so it’s fast right out of the gate. It’s possible to separate out the suspension’s softest setting from the racier powertrain modes, but on a bumpy B-road this can prove troublesome thanks to the air vanes that hang off the car’s flat-floor as part of that transformed aero package, and which will likely scrape the surface beneath. Tighter body control is necessary on our route.

With all of the car’s parameters set to race, and defying expectation, the GTAm feels made for the Elan Valley. Incredibly, it’s not brittle at all. The Pilot Sport Cup 2-shod Giulia is able to soak up the bumps without overreacting to them; it feels athletic and reactive, but not in a needlessly sensitive way. Instead, it is the utterly fabulous balance – owed partly to 54:46 weight distribution – that lends the car a positivity that eclipses even the QF. And you’re perfectly positioned now to take advantage of its inclination for pivoting round its centre; it's alive to your steering and throttle inputs, you alive to it. It is the kind of oneness rarely evoked in a road-going saloon.

If there's one complaint, it's that the steering remains light on feel, but the feedback flows from all corners of the chassis, so the car is easy to read on the limit - and easy to manipulate, too. That much is to be expected from a powerful front-engine, rear-drive car built with the track in mind, but it hardly tells the full story. The V6’s responsiveness and scything on-song brilliance, coupled to the telepathic reactions of the gearbox, make it easy to get the rear tyres spinning just as the nose starts to push under load into a bend. The rears are 20mm wider than the fronts, so with a degree of extra throttle angle, the breakaway from grip to slip is easily managed. Towering confidence follows, helped along by the unflappable, immense performance of those carbon anchors. Best of all, thanks to that supremely indulgent balance, any overly optimistic corner entry can be met with rotation towards the apex, so long as you trail the brake or get chasing the throttle. Consequently, the GTAm never bites; it flatters you, and encourages the kind of immersive, vanishing point-flow that has you nearly emptying the tank without noticing (sorry again, lads).

But that’s what this car is all about. Because at £152k for the GTA and £156k (see spec) for the GTAm, in any guise, it is enormously expensive. You can get a used QF on the PH classifieds for under £40k – a quarter of the price, and you wouldn’t be having a quarter of the fun. But the GTA serves to highlight where the watering down has occurred even in a very good mainstream saloon; it suffers far fewer compromises. As Alfa promised it would, the GTAm feels every bit the racing car for the road, albeit with the fully-fitted dashboard and forgiving suspension that makes such a thing liveable. It seems likely that around 100 examples could end up in Britain, which would be brilliant. Not just because it feels totally at home on the kind of B-road which is just around the corner from your house, but because Alfa has delivered one of the great sports saloons just as we begin the final chapter of the combustion engine. In the not too distant future, merely seeing and hearing one of these covering ground quickly will be an emotional spectacle. Behind the wheel, it’ll be nothing short of motoring nirvana.