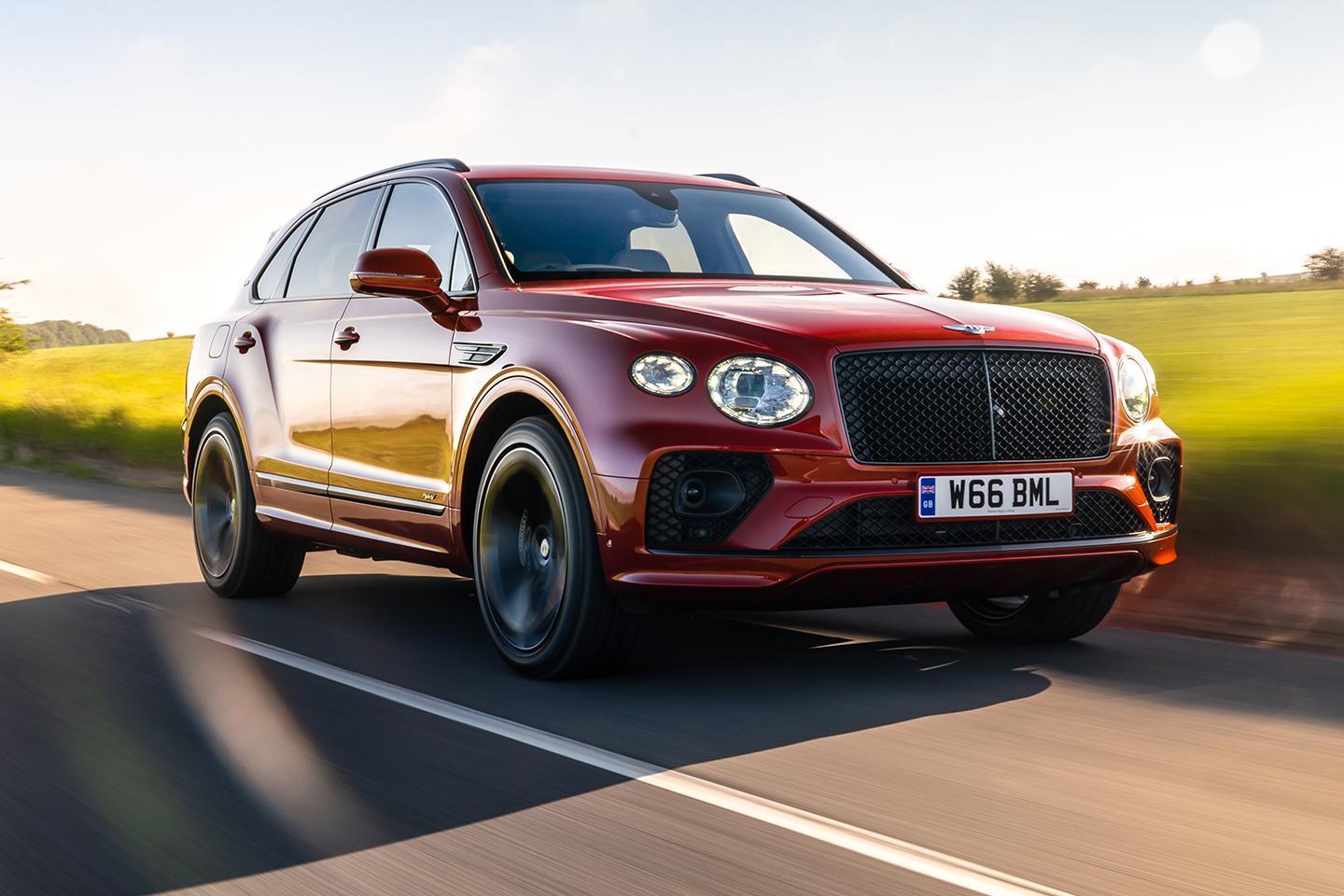 Bentley is very good at being a small part of the Volkswagen Group. The relationship means it gets to draw on expertise and tested technology when it wants to, while adding the wood, leather and 'need you ask, sir?' exclusivity of a true luxury player. We all know it wouldn't take a deep excavation of the Bentayga to turn up substantial amounts of Cayenne and Q7/ Q8 - the same accusation that can be levelled at the Lamborghini Urus. But even the luxo-SUV's biggest naysayers would be hard pressed to deny it has serious presence.

Yet there are also downsides to being a minority player, especially when it comes to getting new snazzy tech. The speed at which electrification and hybridization are moving through the upper reaches of the car industry mean that the facelifted - but mechanically unchanged - Bentayga Hybrid's statistics are looking anaemic when compared to those of its cousin.

The Bentley has a 3.0-litre V6 working with an electric motor to deliver a combined peak of 443hp. But the Porsche Cayenne Turbo S E-Hybrid uses a 4.0-litre V8 with its e-motor to produce a much more serious 670hp. And it's not that the Bentley gets to be more electric, with both cars boasting an identical 25-mile EV range under WLTP (this the minimum required to qualify for tax breaks in various countries.) To add insult to injury, the Cayenne is also thirty grand cheaper before options.

Further down the corporate tree the Audi Q8 60 TFSI e quattro offers a newer version of the Bentley's base powertrain, with the ability to recharge its battery on the move, and costs not much more than half the price. So while Bentley's first part-electric model is a pioneer for that fact alone, it is not breaking new ground technically.

This isn't to say that gentle electrification doesn't suit the Bentayga pretty well, because it does. The Hybrid loses the snarl and punch of the V8 that sits above it in the hierarchy - the W12 is now dead in Europe - but it gains something close to uncanny refinement, and not just when it's running in the EV mode it defaults to every time it starts.

As with the Defender P400e PHEV, the Bentayga Hybrid's electric motor has its work cut out when asked to power the car by itself. The 126hp unit sits between the 335hp single turbo V6 and the eight-speed gearbox, meaning that - as the car needs to be ready to start its combustion engine at any time - the transmission changes ratios even when it is being driven electrically; a slightly odd feeling given the linearity common to true EVs. Working against a kerbweight of 2,645kg - around 200kg more than the V8 - the motor doesn't have much puff beyond urban speeds, acceleration tailing off quickly beyond about 40mph. You'd need lots of road, and patience, to regularly encounter the 83mph electric top speed.

Unlike VW Group's lesser PHEVs, which allow full throttle when operating electrically and only start their engines in kickdown, the Bentayga Hybrid restricts its EV mode to the top of the accelerator's travel, a haptic resistance point indicating when it is giving its all. Pushing beyond is taken as a request for 'get me out of here' thrust and will fire the V6 into life. It makes it hard to hurry the car into a tightish gap at a junction, or when merging on a sliproad, without pressing hard enough to start the engine.

A more surprising omission is the Hybrid's inability to recharge its 17.3kWh battery pack on the move. Once this is depleted the Bentayga effectively becomes a conventional hybrid. The company says that sufficient charge is always maintained to allow full performance to be deployed, and there is a Hold function to allow charge to be kept for later use. But once the electric range display drops to zero the only way to restore the number is by actually plugging the car in.

Hybrid mode does a decent job of blending the two sides of the Bentayga's powertrain together. With the engine off there is a distinct pause when sudden acceleration is requested and the engine fires. But under the gentler use that suits the car better, the V6 cuts in and out almost imperceptibly, and at cruising speeds it is genuinely hard to tell whether it's running or not. Pushed harder and performance feels strong; it's not as quick (or sonorous) as the V8, but it is quick enough, and the V6 makes some muted muscular noises in proximity to its 6,500rpm redline. The Hybrid lacks strong regen when the throttle is lifted, preferring to coast in its Comfort and Bentley dynamic settings. The haptic accelerator also gives a nannyish tap to suggest you lift off when approaching a reduced speed limit.

Chassis settings are unsurprisingly laid back, with the Hybrid's combination of pliant air springs and adaptive dampers making for a softish ride, but one that stayed impressively disciplined over some of Surrey and West Sussex's more three-dimensional backroads. The Hybrid doesn't get the optional 48V anti-roll system of the Bentayga V8 and there is noticeable roll under even moderate cornering loads; the light, resistance-free steering gives little encouragement to push harder. It's a cruiser, not a carver.

It's not long since PHEVs were being promoted on the basis of reduced fuel costs, but these days it tends to be their limited electrical autonomy that gets pushed hardest. These are the not-quite EVs for those who feel they can't go fully electric yet. Or, in the case of a car like the Bentayga, may well want a plug-in in addition to one or more EVs. In truth, the Bentayga Hybrid isn't very electric, with that bare-minimum electric range. But that doesn't mean those choosing it won't be making full use of this - Bentley says one early buyer in London has managed to live their entire life with the car combustion-free so far.

But we know that Bentley's electrification is set to gain pace quickly - the company says it will make its last vehicle featuring any kind of combustion engine in just nine years. Every journey begins with a first step, and the Bentayga Hybrid is that.